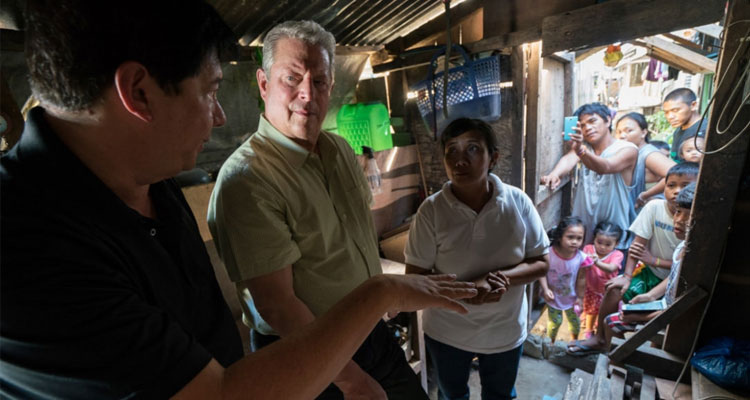 AN INCONVENIENT SEQUEL: TRUTH TO POWER (USA/PG/98 mins)
Directed by Bonni Cohen, Jon Shenk. Starring Al Gore.
THE PLOT: A decade after his ground-breaking documentary ‘An Inconvenient Truth’, former Vice President and crusading environmentalist Al Gore returns to survey the current situation. He finds that concern over climate change is growing ever more prescient. Polar ice caps are melting, sea levels are rising and extreme weather events are becoming the norm, rather than the exception. He finds that there’s also a grassroots-level movement stirred up by the first film to invoke change in the way we, as governments and citizens, approach climate change on our planet. All of this builds up to the Paris Climate Accord in November 2015. But there’s a setback in June 2017, when President Trump announces America’s withdrawal from it…
THE VERDICT: While many Hollywood films often get sequels that they don’t deserve, documentaries are another proposition. ‘An Inconvenient Truth’ was a call to arms, so to speak, to defend our beautiful planet, our only home, against increasing pollution and climate change. The sky is not an open sewer, as he declares. A sequel seems not only welcome but necessary, now that we live in the age of an increasing social media presence. Starting in a Swedish research station in the polar ice caps, Al Gore discovers that the ice has melted under it to a significant degree in the last decade. One of the Gore’s predictions from the original film that was claimed to be nonsense is proved to be true – the melting water ended up flooding the World Trade Center memorial site.
As with the original film, Gore presents some frightening statistics via his unique method of delivery – a dynamic PowerPoint slideshow. Climate change is real and it’s not going away anytime soon. However, he feels that we’re at a tipping point, similar to the Civil Rights movement. We’re this close to making real, substantial change. Renewable energy via wind and solar power is the key to tipping this balance. Visiting sleepy Georgetown, Texas and its amusingly proud mayor, he discovers that it has gone 100% renewable energy – the first in America. The Paris Climate Accord proves to be a momentous event for all concerned, but Gore doesn’t dwell too much on how President Trump’s frankly incomprehensible withdrawal from it will change things. It’s a big hurdle, but it can be overcome (hopefully by the next administration).
Taking over from Davis Guggenheim, co-directors Bonni Cohen and Jon Shenk give a more positive spin on this film than its predecessor. It’s not all doomsday scenarios or warnings about how future generations will live on Earth. If anything, Gore is pleased with progress on climate change… but more needs to be done. It’s that level of positivity which drives this engaging film, so it becomes less a call to arms and more a call to redouble our efforts. Gore’s delivery is charismatic and powerful, emphasising that everyone has a duty to do what they can to fight climate change. While it doesn’t have quite the impact of its predecessor, this justified follow-up demands attention nonetheless.
RATING: 4 / 5
Review by Gareth O’Connor

THE HITMAN’S BODYGUARD (USA/16/118 mins)
Directed by Patrick Hughes. Starring Ryan Reynolds, Samuel L. Jackson, Gary Oldman, Elodie Yung, Salma Hayek, Richard E. Grant.
THE PLOT: Executive protection agent Michael (Ryan Reynolds) finds himself demoted after a client is taken out at the last minute by a sniper. His life isn’t so good now, handling more erratic clients in London. Meanwhile at The Hague in Amsterdam, former Belarusian President Vladislav (Gary Oldman) is on trial for war crimes. The prosecution needs a star witness to nail him though. This is where notorious hitman Darius (Samuel L. Jackson) comes in. While being transported by Interpol agents, including Michael’s former squeeze Amelia (Elodie Yung), the convoy is ambushed by heavily armed Belarusians. Amelia calls in Michael to help. With the three of them on the run from Vladislav’s heavies, can they get to The Hague before the deadline passes?
THE VERDICT: ‘The Hitman’s Bodyguard’ is a mismatched buddy action comedy that could just have easily been made 20 years ago. Presumably with a Shane Black-written screenplay. The ace Hollywood writer/director, whose films include the Jackson-starring ‘The Long Kiss Goodnight’, is clearly an influence here. Tom O’Connor’s screenplay is loaded with over-the-top action, fruity language and constant bickering that gradually turns to mutual respect. Typical Black traits then. However, O’Connor’s script lacks that sparkling polish that can only come from a Black joint.
The screenplay is guilty of obvious signposting. When we first meet Vladislav, we already know he’s the bad guy. Within seconds, he executes a woman and her child. Screenwriting 101. There are some internal shenanigans involving Interpol too, with an insider that is easy to spot early on (it’s in the casting). However, once Michael and Darius get together the fireworks start flying. There’s an insane amount of carnage involved in this film – even more so than a Bond film. The streets of Manchester get ripped up during the ambush, while Amsterdam suffers a breakneck multi-vehicle chase with little regard to public safety. Only the bad guys get hurt. Maybe.
Director Patrick Hughes of ‘The Expendables 3’ fame stages the action sequences with flair though. Given recent terrorist attacks in Europe, the over-extended third act features a questionable sequence at The Hague. It cuts a little too close to the bone, but principal photography began before these incidents so it can be forgiven. Hughes makes good use of the chemistry between Reynolds and Jackson, riffing on the similarly-themed The Gauntlet. Oldman can only do so much with his cookie cutter villain. Hayek is under-used as Darius’ wife, but she does provide some good laughs. ‘The Hitman’s Bodyguard’ wobbles occasionally and is off target, but it’s still a fun, action-packed ride that gets by on the strength of the leads’ chemistry.
RATING: 3 / 5
Review by Gareth O’Connor

FINAL PORTRAIT (UK/Club/90 mins)
Directed by Stanley Tucci. Starring Geoffrey Rush, Armie Hammer, Clemence Poesy, Tony Shalhoub, Sylvie Testud.
THE PLOT: Paris, 1964. Acclaimed Swiss-Italian painter and sculptor Alberto Giacometti (Geoffrey Rush) is living out his final days with his long-suffering wife Annette (Sylvie Testud) and his understanding brother Diego (Tony Shalhoub). He has a prostitute and muse in the form of the younger Caroline (Clemence Poesy), whom Annette tolerates. His visiting American friend James (Armie Hammer), an author and art critic, agrees to sit for a portrait. Arriving at Alberto’s studio, James expects it to take an afternoon. But the erratic Alberto soon needs longer. Much longer. James tries to re-arrange his flight home, but days soon turn to weeks. Will the portrait be finished… or will Alberto keep dithering?
THE VERDICT: When he’s not doing oddball appearances in ‘The Hunger Games’ or ‘Transformers’ franchises, Stanley Tucci is also an accomplished writer/director. His fifth film since his debut, the delicious ‘Big Night’, is an atypical portrait of artist Alberto Giacometti. Instead of going for a decades-spanning biopic, Tucci has zeroed in on his closing days. In a sense, this liberates the film from the trappings of a conventional biopic. Instead, it becomes its own self-portrait, that of a loyal friendship between two men – the perfectionist Alberto and the patient James.
Tucci draws these characters in broad strokes, but fleshes them out to become more than they seem. Alberto is self-critical, with an early outburst against his own sculpture saying that the stand is perfect, the sculpture not so much. He’s rolling in money, but has little time for it. Instead, he throws it out like confetti to those around him and prefers to hide the rest in pockets of his chaotic artist’s studio. James is a chiselled American, with features that Alberto says make him look like a hooligan. Yet, there’s a friendly understanding between them. As the days pass, they break out of the studio, walk and chat over wine and several cups of coffee. This makes the film feel less stagey, so it becomes a more accessible character piece.
He may have been slumming it of late in the likes of notorious bomb ‘Gods Of Egypt’, but Rush gets a juicy role to sink his teeth into here. Tucci coaxes an eccentric but loveable rogue out of Rush. It’s a wonderful, unfussy performance which is complimented nicely by Hammer’s low-key delivery. For all the good acting, the film still feels quite slight, with a running time that matches it. Tucci doesn’t really let the audience in on what makes Alberto tick, preferring to let audiences get a feel for him and nothing more. The film becomes a painting, open to its own interpretation. That’s a sly directorial touch on Tucci’s part. However, the performances are enough to drive the film and make it more engaging than it initially seems.
RATING: 3 / 5
Review by Gareth O’Connor