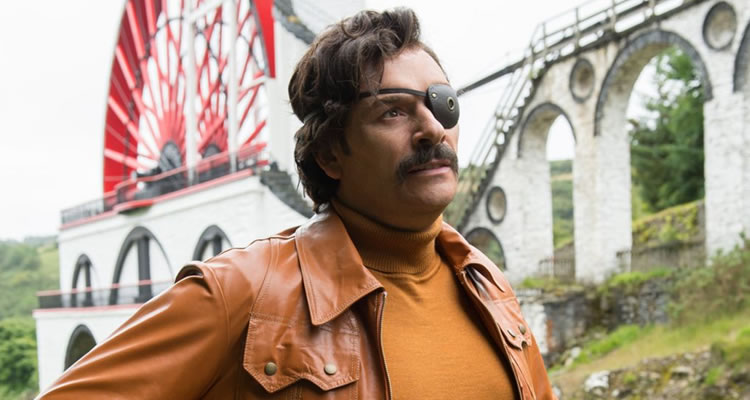 MINDHORN (UK/15A/89mins)
Directed by Sean Foley. Starring Julian Barratt, Simon Farnaby, Andrea Riseborough, Russell Tovey, Essie Davis
THE PLOT: Actor Richard Thorncroft (Julian Barratt) was at the top of his game in the 1980s; star of the hit TV show Mindhorn – on which he played a secret agent with a bionic eye that could always see the truth – Thorncroft was sure that he was one step away from the big time. In 2016, however, things are not so rosy for Thorncroft; washed up and making TV ads for orthopaedic socks, Thorncroft is still suffers from delusions of grandeur. When a killer on the Isle of Man will only speak to Mindhorn, however, Richard Thorncroft is drafted in, and dusts off his most famous character one more time.
THE VERDICT: Written by Julian Barratt and Simon Farnaby, and starring the former ‘Mighty Boosh’ star Barratt as a washed up man who never got the break he thought he deserved, ‘Mindhorn’ is farcical, over the top, absurd and perhaps most importantly, incredibly funny.
Julian Barratt takes to the indulgent, delusional and completely un-self aware character of Richard Thorncroft like a duck to water, and runs with the joke throughout the film. There are moments of humility for the character, but on the whole, Thorncroft is at his best when he believes this is his big comeback. Simon Farnaby takes on the role of Clive, Richard’s former stunt double and manages to convey comedy convincingly through a Dutch accent that seems to be here for no reason at all. Andrea Roseborough plays Isle Of Man cop DC Baines, Essie Davis plays Richard’s former flame Pat, and the rest of the cast features Steve Coogan, Simon Callow, Kenneth Brannagh, Russell Tovey and Richard McCabe.
Barratt and Farnaby’s screenplay feels rather like it was inspired by Toast of London – which stars former Mighty Boosh alum Matt Berry – and there are definitely times when Richard Thorncroft’s delusions of grandeur mirror that of Barratt’s Mighty Boosh character Howard Moon’s similar beliefs, but there is a charm and wit to ‘Mindhorn’ that makes it stand out on its own. The jokes come thick and fast, with many of them resting on Barratt’s capable shoulders, but it is good fun to see Brannagh and Callow take the mick out of their public personas, and to have Steve Coogan play a character whose TV show was not cancelled, for once.
First time feature director Sean Foley keeps the pacing and the timing of ‘Mindhorn’ going, and plays up the kitsch nostalgia factor with mentions of Terry Wogan, and plenty of rather naff ‘Mindhorn’ merchandise thrown in for good measure. ‘Mindhorn’ is, at its heart, a caper, and there is plenty of fun to be had as the characters wrestle their way to the truth across the most famous landmarks of the Isle of Man.
In all, ‘Mindhorn’ is a film that definitely follows in the footsteps of ‘The Mighty Boosh’, ‘Garth Marenghi’s Darkplace’, ‘Toast of London’ and’ I’m Alan Partridge’, but it manages to become it’s own film through Barratt’s clever comedy and some great pacing. Fans of quirky British humour rejoice! It is alive and well, and living on the Isle of Man!
RATING: 4/5
Review by Brogen Hayes

SLEEPLESS (USA/15A/95mins)
Directed by Baran bo Odar. Starring Jamie Foxx, Michelle Monaghan, Dermot Mulroney, Scoot McNairy, Tip ‘T.I.’ Harris, Octavius J. Johnson.
THE PLOT: Las Vegas cop Vincent (Jamie Foxx) and his partner Sean (Tip ‘T.I.’ Harris) rip off a drug deal and steal a bag of cocaine worth thousands of dollars. Bad idea. Casino boss Rubino (Dermot Mulroney) was due to deliver the bag to hard-wired drug dealer Novak (Scoot McNairy), who is under pressure to step up to the plate from his old man. Rubino kidnaps Vincent’s son Thomas (Octavius J. Johnson) and uses him as leverage, but the bag is snatched by driven Internal Affairs cop Bryant (Michelle Monaghan). In a town full of dirty cops, someone is going down…
THE VERDICT: ‘Sleepless’ is a remake of 2011 French-Belgian film ‘Nuit Blanche’ / ‘Sleepless Night’. Not that it matters too much, as the original bypassed cinemas here. This American remake does little to distinguish it from the myriad of cop thrillers that regularly pop up in cinemas. Much like the standard issue police gun, this is a standard issue cop thriller.
It starts promisingly though, setting up all the players in turn and their own particular agendas. That is, before they all start to butt heads. Everyone here is under pressure of some sort, whether from higher-ups, associates or their own driven personalities. For a while anyway, Swiss director Baran bo Odar turns up the heat and cranks up the tension to good effect. Around half-way through, the film loses momentum and becomes tiresome. There are only so many times a chase through a casino floor can be exciting, so Odar throws in a car at one point in a bid to salvage that momentum.
The plot ties itself up in tangles as characters switch sides without much motivation. Then there are the usual last-second saves by characters who shouldn’t even be there. They’re all very predictable thriller tropes. Dirty cop films are ten-a-penny, so this film really needed to offer something more. Odar does try to add another angle to Vincent’s story, but it’s a rather late plot development which complicates the plot unnecessarily. Foxx could do these kinds of roles in his sleep, so he’s presumably picking up a paycheque here. Monaghan is good though, even if her character’s troubles are only hinted at. ‘Sleepless’ is passable, but is unlikely to give anyone sleepless nights.
RATING: 2.5/5
Review by Gareth O’Connor

A DOG’S PURPOSE (USA/PG/100mins)
Directed by Lasse Hallström. Starring Dennis Quaid, Josh Gad, Peggy Lipton, Juliet Rylance, Britt Robertson
THE PLOT: Over the course of many lives, and many decades, a dog – voiced by Josh Gad – struggles to understand what his purpose is in life.
THE VERDICT: Shrouded in controversy since a TMZ video surfaced of a dog being treated cruelly on set – which has since been refuted as being fake and deliberately edited to mislead the public – ‘A Dog’s Purpose’ is a strange sort of film. Based on the novel by W. Bruce Cameron, there are touches of religious allegory – namely Buddhism, Hinduism, Jainism, and Sikhism – throughout the film, as the lead dog is constantly reincarnated, but it is obvious that the film also tries to answer the very human question of why are we here, through the eyes of a canine.
The cast of the film features Josh Gad as the voice of the dog known as Bailey, Ellie, Tino and Buddy throughout his lives, and Gad makes sure to emphasise the playful and loyal nature of dogs. The human cast is made up of Dennis Quaid, Peggy Lipton, Juliet Rylance, Britt Robertson, John Ortiz and Kirby Howell-Baptiste. Each of the actors does fine in their roles, but each also struggles as the only characters we really get to know are Bailey and his first human friend Ethan, with the others seemingly filling out the film’s running time.
It took a whopping five writers – including novelist W. Bruce Cameron – to bring ‘A Dog’s Purpose’ to the big screen; W. Bruce Cameron, Cathryn Michon, Audrey Wells, Maya Forbes and Wally Wolodarsky, and this is evident on screen. The first of Bailey’s lives is over before it begins, the seond – with Ethan and his family – is the longest, but it is the dog’s life with his fourth family that he believes to be the best, even though the audience gets to see very little of this. As mentioned, there are hints at the dog trying to find his purpose is a mirror of humans trying to find our own, but since the film offers no real answers, this feels like a waste of time, and the idea of reincarnation that keeps cropping up throughout the film feels as though it comes out of nowhere, and is included just for the sake of trying to create a narrative flow… Which does not work. There are some fun scenes, however, and the dogs are pretty cute, as is Bailey’s mourning the cat’s loss that it is not a dog.
As director, Lasse Hallström carries on his recent trend of making superficial films that are supposed to be moving but rarely are. The human performances in the film are fine – the dogs totally outshine them – and Hallström embraces the idea of ‘A Dog’s Purpose’ as canine propaganda, making sure that all actions from the dogs are seen as selfless acts of love, even when the y re eating precious artefacts or crying to be allowed to sleep on a bed. Hallström does not concern himself with the humans in the film, and does not bother fleshing out any characters while introducing subplots, only to have them vanish into thin air. Still… Dogs, Amirite!?
In all, ‘A Dog’s Purpose’ is a film that tries to answer the big questions in life through the eyes of a dog, and does not really work. Many ideas and subplots are raised in the film and allowed to fall by the way side, and the humans are never given a chance to crate real, believable or rounded characters on screen. The dogs are cute though, and even though the film is full of puppy propaganda – cats are cool too, you know! – there are some heartwarming scenes, just not enough to carry the rest of the film, which is a bit of a mess.
RATING: 2/5
Review by Brogen Hayes