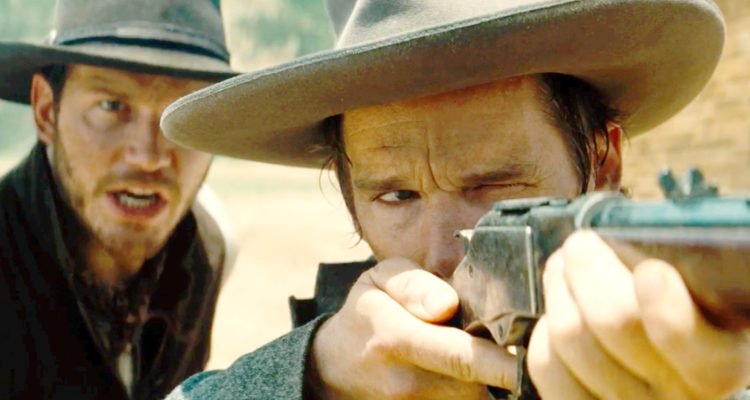 THE MAGNIFICENT SEVEN (USA/12A/132mins)
Directed by Antoine Fuqua. Starring Denzel Washington, Chris Pratt, Haley Bennett, Ethan Hawke, Vincent D’Onofrio
THE PLOT: In the old West, businessman and rogue Bartholomew Bogue (Peter Sarsgaard) has his eye on the small town of Rose Creek, which happens to be home to a literal gold mine. When Bogue kills several of the town’s men and gives everyone else three weeks to decide whether or not to sell to him, Emma Cullen (Haley Bennett) sets out to round up outlaws whose loyalty can be bought, in order to protect the town from Bogue and his men.
THE VERDICT: A remake of a remake of a remake, it seems like ‘The Magnificent Seven’ is another remake that is surplus to requirements – and in many ways it is – but there is enough in the film to keep audiences interested, even if this new version of the story of gunslingers fighting for the little guys is heavy on action and light on plot.
The seven are made up of Chris Pratt, Denzel Washington, Ethan Hawke, Vincent D’Onofrio, Byung-hun Lee, Manuel Garcia-Rulfo and Martin Sensmeier. Each of them do fine in their role, although they are never really given a chance to be anything other than superficial. It is obvious that the seven have fun with their roles though – especially Chris Pratt and Ethan Hawke – and their enthusiasm is infectious. The rest of the cast is made up of Haley Bennett, Matt Bomer and Peter Sarsgaard, whose villain is just the right amount of oily and sinister.
Richard Wenk and Nic Pizzolatto’s screenplay – adapted from ‘Seven Samurais’, not the 1960 film, for those curious – is fine, but the dialogue is nothing special and the story often runs a little thin. None of the characters are particularly well fleshed out, and we learn how the characters know one another but never truly discover their motivations in taking on a fight that isn’t theirs.
As director, Antoine Fuqua keeps the film moving at a steady pace for the first two acts, before the final set piece arrives and sucks any sense of urgency out of the film. The performances from the cast are fine, but most are one note and, as mentioned, the audience never really gets to know anything about this merry band of anti-heroes, leading to an emotional disconnect with the film. That said, ‘The Magnificent Seven’ is beautifully shot, and shows off Monument Valley – made famous by so many great Westerns – to great effect.
In all, ‘The Magnificent Seven’ is a remake we didn’t need, but there is fun to be had here. The cast do fine with the little they are given, and the film looks beautiful, it just needed stronger character development and some better pacing in the final act.
RATING: 3/5
Review by Brogen Hayes

THE GIRL WITH ALL THE GIFTS (USA | UK/15A/111mins)
Directed by Colm McCarthy. Starring Gemma Arterton, Paddy Considine, Glenn Close, Sennia Nanua, Dominique Tipper
THE PLOT: In a dystopian future, Melanie (Sennia Nanua) knows no other life than being feared by adults, even as they teach her, and experiment with her. When the secure base she lives on is overrun by Hungries, she, her teacher Miss Justineau (Gemma Arterton), scientist Dr Caldwell (Glenn Close) and soldiers Sgt Parks (Paddy Considine) and Kieran (Fisayo Akinade) set out on a journey for survival, even as Melanie knows she is not like those around her.
THE VERDICT: Based on the novel of the same name by M.R. Carey, ‘The Girl With All The Gifts’ takes its name from Greek myth; specifically tale of Pandora who found hope at the bottom of the box of evil she released into the world.
The cast of ‘The Girl With All The Gifts’ is a strong one, and although it falls to young Sennia Nanua to carry the film, she does well in her dual role as the polite but curious Melanie, as well as fleshing out the darker side of the character. Gemma Arterton makes Miss Justineau caring but fearful, Glenn Close – as always – is a force to be reckoned with as the frighteningly businesslike Dr Caldwell, and Paddy Considine makes Sgt Parks a man with little time for sentimentality, a man with survival on the brain.
Written for the screen by author M.R. Carey, ‘The Girl With All The Gifts’ feels a little like the Saoirse Ronan film ‘How I Live Now’, crossed with zombie flick ‘Warm Bodies’. Although the mindless, flesh eating “zombies” in the film are referred to, rather cutely, as Hungries, and they are not the end point of the fungus that made them such, ‘The Girl With All The Gifts’ starts off as something fresh and different, and has moments of greatness throughout the film, but it still ends up in a familiar place, with our merry band of survivors facing a terrible choice.
‘The Girl With All The Gifts’ is the second feature length outing from director Colm McCarthy, although he is perhaps best known for his TV work, which includes ‘Sherlock’, ‘Peaky Blinders’ and ‘Doctor Who’. With ‘The Girl With All The Gifts’, McCarthy plays up the mystery element of the film incredibly well, but as soon as questions begin to be answered, the film runs out of steam. The performances are incredibly strong, but struggle under a running time that feels drawn out, making every scene feel overly long and familiar. As well as this, there is some product placement in the film that is jarring and, although it seems to be used to give the film the feel that this is our world, still ends up feeling very out of place.
In all, ‘The Girl With All The Gifts’ starts off well as a mystery flick, where children are suddenly to be feared and restrained. As the running time drags on however, the film runs out of energy and, although the performances are excellent, these are not enough to make up for a drawn out film that starts off somewhere new, but ends in a familiar place.
RATING: 3/5
Review by Brogen Hayes

LITTLE MEN (USA | Greece/PG/85mins)
Directed by Ira Sachs. Starring Greg Kinnear, Alfred Molina, Jennifer Ehle, Michael Barbieri, Theo Taplitz
THE PLOT: Jake (Theo Taplitz) and Tony (Michael Barbieri) become fast friends when Jake’s parents inherit the building where Tony’s mother Leonor (Paulina Garcia) has had a dress shop for many years. Although Jake’s grandfather never increased the rent, Jake’s father Brian (Greg Kinear) is determined to, and this puts strain on the friendship between the two boys.
THE VERDICT: Directed by Ira Sachs, who most recently brought us the charming and beautiful ‘Love is Strange’, ‘Little Men’ is the story of kids who find solace and friendship in one another, only to have this challenged due to gentrification of the Brooklyn.
Both Theo Taplitz and Michael Barbieri are excellent as Jake and Tony, and their relationship on screen is warm and natural. They influence one another in the way only young kids can, and they are a joy to watch together on screen. Greg Kinnear, Jennifer Ehle, Alfred Molina and Paulina Garcia play the adults in the film, and they are not only lovely with the young cast, but with one another, even as the situation gets more and more tense.
Written for the screen by Ira Sachs and Mauricio Zacharias, ‘Little Men’ is as charming and touching as Love is Strange, but examines the love that comes with friendship. As with Sachs’ previous film, love is severely put to the test in the film, and it is this that keeps the audience engaged with these two young kids. The dialogue is strong, and feels completely natural, although there are some issues with the story seeming a little too thin to fill the admittedly short 85 minute running time.
As director, Ira Sachs makes all the relationships in the film feel real – even when the kids stop talking to their parents, it feels as though it comes from a place of reality rather than the script – and makes sure to out forward the concept that even though this seems like a simple situation to the kids, it is really more complicated than it seems. Telling the story almost exclusively through the eyes of the children makes the film all the more touching, but there are times when the energy of the story drops, then scrambles to catch up. There is no major set piece to end the film, but emotions run strong with this one, and there is a sweetness and feeling of reality to the final scene.
In all, ‘Little Men’ is sweet and touching, and contains strong performances from Kinnear, Ehle and Garcia, while the two youngest members of the cast shine in their relationship to one another. There are times when the story feels dragged out though, and the energy of the film struggles to recover after it lags.
RATING: 3.5/5
Review by Brogen Hayes

DARE TO BE WILD (Ireland/PG/100mins)
Directed by Vivienne De Courcy. Starring Emma Greenwald, Tom Hughes, Alex Macqueen, Janie Dee, Christine Marzano
THE PLOT: Ever since she was a child, Mary Reynolds (Emma Greenwell) has had a fascination with nature, and dreams of becoming a landscape designer. When she lands a job with a prestigious firm she thinks she is on her way, but her designs are stolen and she is left jobless. Not deterred, Mary decides to take matters into her own hands and enter the Chelsea Flower Show on her own steam, the only trouble is that she’ll need sponsors and a lot of help to make her dream come true.
THE VERDICT: ‘Dare to be Wild’ is not the only recent film to focus on women in landscape design – Kate Winslet played such a character in Alan Rickman’s ‘A Little Chaos’ – and although the film feels very earnest, it also feels rather twee, with some meandering and off-centre Irish accents to boot.
Emma Greenwell does fine in the lead role of Mary Reynolds – once you can look past her accent and her strange resemblance to Kiera Knightley. Greenwell is passionate and rather charming, but she is constantly struggling under the weight of the screenplay and her dodgy accent – why are English actresses being drafted in to play Irish when we have a wealth of talent here at home!? Tom Hughes plays Christy, Mary’s antagonist/love interest and he is just the right combination of aloof and charming… Accent bedamned. The rest of the cast features Don Wycherley, Alex Macqueen, Janie See and Christine Marzano.
Vivienne De Courcy’s screenplay is inspired by the true story of Mary Reynolds who, at the age of 28, became the youngest woman and the first Irish person to win a Gold Medal at the Chelsea Flower Show, even managing to beat competition from Prince Charles. There is a sweetness to the story, and it is a true underdog tale, but this sweetness somehow gets lost between quirkily dressed characters, a trip to Africa and all the “Oirish” schmaltz. The idea for Mary’s garden is beautiful – keeping gardens wilder, as opposed to manicured – but this film does not do the story justice.
As director, Vivienne De Courcy makes sure that ‘Dare to be Wild’ moves at lickety speed, and the cinematography is often breathtaking. That said, the love story feels shoehorned in, and characters quickly fall into familiar roles; the plucky one, the cheat, the antagonist who out hero will fall in love with. There is a warmth to it, but it all feels a little twee and familiar.
In all, ‘Dare to be Wild’ is a completely inoffensive film in its intentions, but it feels a little derivative of ‘A Little Chaos’ – even though it is a true story – and the entire thing ends up feeling rather twee and a little like it takes place in the land of the leprechauns. It’ll probably play well outside of Ireland though.
RATING: 2/5
Review by Brogen Hayes