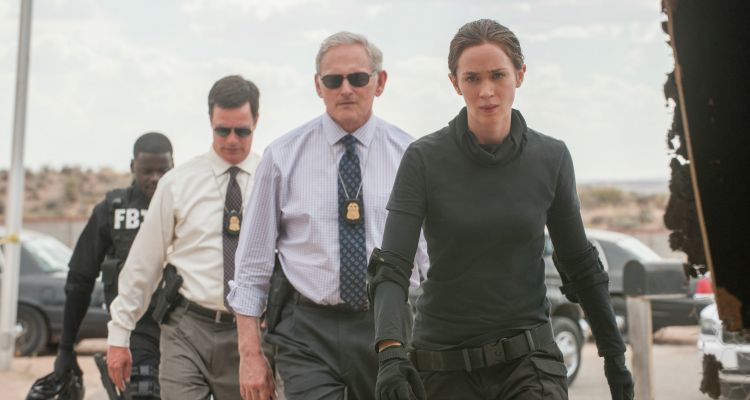 SICARIO (USA/15A/121mins)
Directed by Denis Villeneuve. Starring Emily Blunt, Victor Garber, Josh Brolin, Benicio Del Toro.
THE PLOT: After a gruesome find at a house raid in Arizona, FBI Agent Kate Macy (Emily Blunt) is asked to volunteer for a task force aimed at taking a Mexican cartel boss down. Initially excited to be finally on the front lines, Macy soon learns that there is more going on in this task force than she has been led to believe.
THE VERDICT: Denis Villeneuve has blazed quite a trail with his previous films – INCENDIES, PRISONERS and ENEMY – so it is fitting that he brings Sicario to the Cannes Film Festival, and fitting that the film be a dark and dense thriller, beautifully shot by Roger Deakins.
Emily Blunt is the heart of the story; the outsider drawn into a world that she doesn’t understand. It is through her eyes that the audience learns, this used to make sure that we are on the morally righteous Macy’s side for the entire film. Blunt is strong and engaging in the role, and sets the pace for the rest of the cast. Josh Brolin plays a lax, Lebowski-esque CIA Agent, Benicio Del Toro plays Alejandro, a CIA Agent with a dark and mysterious past. Del Toro is perfectly enigmatic in the role, and consistently throws the ordered world off balance. The rest of the cast is made up of Jon Bernthal, Victor Garber, Daniel Kaluuya and Jeffrey Donovan.
Actor Taylor Sheridan – known for VERONICA MARS and SONS OF ANARCHY – turns his hand to writing for Sicario, and delivers a tense and tightly written script for the film. There are some wonderful turns of phrase throughout, although the choice to keep the audience in the dark with Macy does lead to some struggles with pacing and engagement.
Director Denis Villeneuve amps up the tension and sense of creeping dread throughout the film, using a score by Jóhann Jóhannsson to thrilling effect. Villeneuve makes the world of the film unsettling – even when Deakins’ cinematography and Joe Walker’s editing make it a thing of beauty – and combined with the subtle performances in the film, this adds up to a menacing and engaging whole. There are time, however, where the film becomes too involved in creating a feeling, rather than a coherent story, which means the pacing drops and audience curiosity turns to confusion. Villeneuve claws it back in the end, but the middle of the film is different beast to the rest.
In all, SICARIO is beautifully shot by Roger Deakins, has a feeling of dread and fear throughout thanks to director Villeneuve and contains some strong and masterful performances. The pacing drags from time to time, but Jóhann Jóhannsson’s score keeps things moving, and it all comes back together in the end.
RATING: 4/5
Review by Brogen Hayes

RED ARMY (USA/Russia/12A/84mins)
Directed by Gabe Polsky. Starring Slava Fetisov, Viktor Tikhonov, Anatoli Tarasov.
THE PLOT: Charing the rise and fall of the Soviet Union’s legendary Red Army ice hockey team, as filmmaker Gabe Polsky talks to former players, journalists and a former KGB employee, we get to see those early breakthrough years, as coach Anatoli Tarasov creates a winning team. We also see how important the team was to Stalin, and how the sport itself came to regarded as the national sport by the Soviet people. The glory years were truly glorious on the ice, even if life off the ice wasn’t quite so rosy. Perhaps unsurprisingly, by the 1990s, the star players started to find the lure of the Yankee dollar a little too great…
THE VERDICT: After the inevitable montage of newsreel footage reminds us all how America and Russia have never been quite the best of buddies, Gabe Polsky’s exploration of just why and how the Soviet Union dominated ice hockey on the world stage for so long seems to get off to a shaky start when an insistent line of questioning as Red Army icon Slava Fetisov concentrates instead on finishing a text ends with a middle-finger from the interviewee. A stereotypical Russian, or a stereotypical American? Turns out, thankfully, these guys are friends, Polsky, the son of Russian immigrants, having played ice hockey for Yale.
From there, we go deep inside the history of that Red Army, Stalin believing that the country’s hockey team would represent Soviet Superiority. Which meant they would have to kick America’s ass. Again and again. And again.
The interviews reveal as much about life in Russia at the time as it does the US/USSR rivalry and the sheer brilliance of the Red Army. Much of the latter was down to coach Anatoli Tarasov, a quiet genius of the game who was smart enough to include advice from chess grandmaster Anatoly Karpov and exercises from the Bolshoi dancers. It makes for a thrilling ride, not only through the glorious skill on display, but all that other dumb stuff that surrounds sports. Like, you know, politics, glory, celebrities.
RATING: 4/5
Review by Paul Byrne