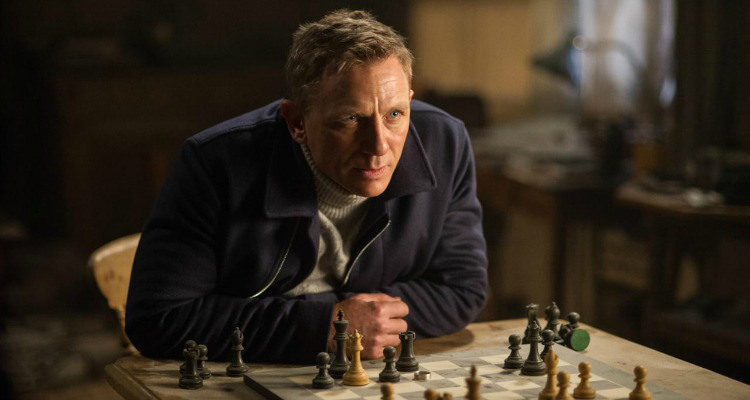 Spectre (UK | USA/12A/148mins)
Directed by Sam Mendes. Starring Daniel Craig, Monica Bellucci, Christoph Waltz, Léa Seydoux, Ralph Fiennes, Naomie Harris, Ben Whishaw, Andrew Scott.
THE PLOT: After receiving a cryptic message from someone from his past, James Bond (Daniel Craig) goes rogue from MI6 to uncover the shadowy and evil organisation known as Spectre. Meanwhile, MI6 faces a new challenge from inside the government.
THE VERDICT: Sam Mendes’ second Bond film is the longest film of the franchise at 148 minutes, and although the locations are spectacular, the suits sharp and the gadgets gadgety, the film simply does not have enough momentum to justify the running time.
Daniel Craig returns to his sombre and dark role as James Bond, but actually gets some comedy in this new outing, which is a refreshing change. Léa Seydoux gives a strong but rather unremarkable performance as Madeleine Swann, and bland feeling is not the fault of the actress however, she is just never given anything with which to shine. Monica Bellucci and Chrisoph Waltz are criminally underused as Lucia Sciarra and Franz Oberhauser respectively, with neither really being given a chance to make their mark on the film. Andrew Scott turns up in a small enough role, but again, is sadly underused. Ben Whishaw, Naomie Harris and Rory Kinnear all return, and Ralph Fiennes tries his best as M, but Judi Dench is sorely missed.
John Logan, Neal Purvis, Robert Wade and Jez Butterworth’s screenplay tries its best to make nods to the early Bond films, with gadgets feeling delightfully retro, and an attempt to tie former villains from Craig’s tenure as Bond into the web woven by Spectre. It is this attempt to pay homage to the films that started it all, that leads to Spectre stumbling, and losing the bang it needed. The film meanders through several beautiful locations, but there are entire segments that don’t need to happen for the story to make sense, and these drag the momentum of the film, which gets off to a wonderful start, to a halt. As well as this, many characters are entirely underwritten, with others being over written to the point of falling flat.
Director Sam Mendes paces the first half of ‘Spectre’ incredibly well, with thrilling action chases and some nice insubordination from 007, but as soon as the organisation Spectre is introduced, the film begins to meander, and all the admittedly fantastic set pieces in the world don’t give the pacing the kick it needs. That said, there is a lot to enjoy in ‘Spectre’, with fantastic set pieces, stunning locations and plenty of quips and smirks from Craig in his most famous role. Sadly, cinematographer Roger Deakins did not return, a loss which is definitely felt, since ‘Skyfall’ was such a visual treat.
In all, ‘Spectre’ is a rambling, meandering film, which would be fine if this was not a James Bond outing where fast paced is the name of the game. Craig, Seydoux, Waltz and Scott are all fine, but the film is unevenly written, messy and slow. The set pieces are fun, however, and the suits sharp, but after the triumph of ‘Skyfall’, ‘Spectre’ just falls a little flat.
RATING: 3/5
Review by Brogen Hayes

THEY WILL HAVE TO KILL US FIRST (UK/IFI/89mins)
Directed by Johana Schwartz. Starring Khaira Arby, Songhoy Blues, Moussa Sidi, Fadimata ‘Disco’ Walet Oumar.
THE PLOT: Following the civil war of 2012, northern Mali musicians found themselves in the curious position wherein Islamist extremists had banned the playing of music. Forced into exile, singers Khaira Arby and Fadimata ‘Disco’ Walet Oumar try to fight the good fight, their cause helped by the fact that the latter’s husband, Hassan Ag Mehdi, is a member of the Tuareg liberation movement MNLA. The fighting escalates though, and some outside help is needed. The arrival of Damon Albarn’s Africa Express project – bringing western and African musicians together – helps highlight the musicians plight on an international stage…
THE VERDICT: Slickly made – almost a little too slickly, for a documentary – ‘They Will Have To Kill Us First’ captures recent unrest in Mali through the eyes of the musicians there fight an Islamic ban on music. Concentrating largely on the legendary singer Khaira Arby and newcomers Songhoy Blues (who end up playing Albert Hall and being signed to a UK label after some Damon Albarn help), Schwartz’s documentary is easy to watch, and touches on some important issues.
That it does so with a near-clinical cool shouldn’t take away from the politics behind the beats here. The ban is now lifted, but the troubles remain.
RATING: 3/5
Review by Paul Byrne

BEING AP (UK/12A/103mins)
Directed by Anthony Wonke.
THE PLOT: “You have to chase the thing you can’t ever catch”, so says one of the most successful and decorated jockeys of all time; AP McCoy. Director Anthony Wonke chronicles the final months of AP’s career as he wrestles with the decision to retire, and pushes the boundaries to become even more successful than he already is.
THE VERDICT: There is often curiosity about sporting megastars, and just how they have the determination to be the best in their field. AP McCoy is undoubtedly one of the best jockeys to have ever rode in the sport, winning over 5,000 races, competing for 20 years and coming back from injury again and again. To the layman, it would seem that horse racing is all about the horse, but in the course of ‘Being AP’, it becomes clear that the jockey is an integral part of the win.
What becomes clear through the documentary is that AP McCoy has a determination to win. He repeatedly states that racing is all about the numbers to him; the records he can set in order to make those coming through the ranks after him truly struggle to break. What also emerges is a man who is singularly focused but has a talent for giving the horses he rides the confidence and the strength to win; as his agent Dave Roberts says “It’s uncanny how many times he has won on horses that should not have won”.
It is hard not to root for this determined and surprisingly funny sportsman, but as the documentary goes on, and we are repeatedly told how good AP is at his chosen sport, the lack of information as to how he got where he got becomes evident. The first half of the film focuses on AP’s determination to win, and to not retire; there is very little look back over his career and struggles to stay at the top for 20 years before the film rockets toward it’s conclusion and AP’s retirement.
The film’s final act focuses on the end to a glittering career, and while those around AP are delighted with the decision, as it means the jockey is no longer putting himself in danger of injury and worse, the cracks in AP’s cool façade begin to show, as his jokes about being put “in a home” when retired hint at a darker emotion lingering under the surface. Since the film ends with AP’s last race at The Grand National earlier this year, this is never explored.
In all, however, ‘Being AP’ is a fascinating look behind the scenes at one of the most determined, dogged and successful jump jockeys ever to compete in the sport. AP is engaging, as is his wife Chanele and agent Dave Roberts, but a look back at his career and where his determination to be the best came from would have led to a more rounded and satisfying documentary. As it stands ‘Being AP’ is entertaining and engaging, but a little lacking.
RATING: 3.5/5
Review by Brogen Hayes

FRESH DRESSED (France | USA/Lighthouse/90mins)
Directed by Sacha Jenkins.
THE PLOT: Documentary filmmaker Sacha Jenkins takes us through the evolution of fashion in the hip hop industry – both that or artists and fans – with the help of some famous faces, including Kanye West, Parrrell Williams, André Leon Talley and designer Dapper Dan.
THE VERDICT: Fresh Dressed sets out to examine the rose of urban street clothing from its use to identify gang members and leaders, through upcoming hip hop and rap acts dressing a certain way to appeal to their audience to the rise of designer labels being worn by those both on stage and off. The film is carefully constructed to allow the people who experienced and noticed these trends to speak for themselves, while current artists and designers are allowed their say as the film progresses.
Sacha Jenkins’ direction allows a clear line to develop from gangland fashion to today’s trends, while showing the history of the desire to look ‘fresh’ through the decades; from slaves being given good clothes for their church attendance, to white sneakers and clean clothes being associated with strong financial health. The film touches on the idea that clothing is used to cover up insecurity, but perhaps not as much as could have been expected, and the idea that clothing really is superficial is never really gone into at any great length. That said, the interviewees are knowledgeable and entertaining, and it is not always the celebrities that come out with the most insightful observations.
In all, ‘Fresh Dressed’ is an interesting look at the correlation between hip hop and style, fashion and how we feel about ourselves. There are ideas brought up that are not explored as deeply as they could have been, but it’s a treat to hear high profile stars and designers talk about their inspirations and style. The fact that everything comes full circle with people now being inspired by and buying clothes from the internet, in order to express their individual style is just the icing on the cake.
RATING: 3.5/5
Review by Brogen Hayes