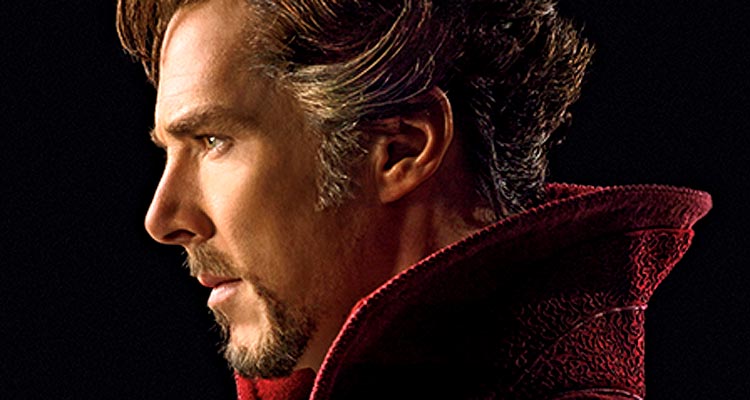 DOCTOR STRANGE (USA/12A/115mins)
Directed by Scott Derrickson. Starring Benedict Cumberbatch, Chiwetel Ejiofor, Rachel McAdams, Tilda Swinton, Mads Mikkelsen, Benedict Wong.
THE PLOT: Dr. Stephen Strange (Cumberbatch) is just about the finest neurosurgeon New York has to offer. He just might also be the most arrogant, which means that when his top-of-the-range sports car goes careering off a cliff late one night, you won’t find many gasps of anguish from the audience.
Waking up to find his life-saving, life-defining hands are now effectively useless, Strange goes slightly bonkers trying to find a cure, eventually finding himself at the feet of a mystic (Swinton) in the depths of Katmandu. And that’s when ‘The Karate Kid’ on LSD kicks off. Which is handy, because disgruntled ex-employee (Mikkelsen) of said temple is on a rampage to do some evil planetary overlord’s bidding and bring the world to its knees…
THE VERDICT: It is, of course, perfect casting, Cumberbatch having pretty much cornered the market right now when it comes to the oddball intellectual look. The fact that he looks like the bastard child of Tilda Swinton and Tilda Swinton means casting David Bowie’s Taylor Durden as his master and mentor here makes perfect sense too. But what of the film itself, the latest in a long line of highly lucrative and generally rather fine Disney-Does-Marvel blockbusters?
At heart, ‘Kung Fu Panda’ as directed by Christopher Nolan, ‘Doctor Strange’ hits all its marketing marks, and can’t be faulted on the techno-wizardry (just about justifying 3D), the cad-to-spiritual-riches plot line (think Tony Stark meets ‘The Matrix’), and, yep, smart casting all the way down the line.
The flaws? Well, despite all the eye-popping visuals and the comic relief of Cumberbatch’s sardonic doc, there is the somewhat inevitable smell of over-familiarity here, as though we’ve seen this reluctant superhero tale many, many times before. And even at just under the two-hour mark, this is another Marvel epic that feels a tad too long for its own good.
But, minor squabbles, people. ‘Doctor Strange’ does everything it says on the bottle. And a little more.
RATING: 4/5
Review by Paul Byrne

TRAIN TO BUSAN (South Korea/Light House/118mins)
Directed by: Sang-ho Yeon. Starring Yoo Gong, Soo-an Kim, Yu-mi Jeong, Dong-seok Ma, Woo-sik Choi.
THE PLOT: Seok Woo (Yoo Gong) and his young daughter Soo-an (Soo-an Kim) board the Korean high speed train to traveql from Seoul to Busan, where Soo-an’s mother lives. As the train pulls out of the station a young woman boards showing some unusual symptoms, and it is not long before a zombie outbreak takes over the train, and shines a spotlight on the true personalities of the people on the journey to safety.
THE VERDICT: ‘Train to Busan’ screened at the Cannes Film Festival earlier this year, Our of Competition in the Midnight Screenings selection, and it is easy to see why. Director Sang-ho Yeon’s first live action movie is a high-speed race for survival that does not shy away from violence, but has some truly touching moments. Already tipped for US and French remakes, ‘Train to Busan’ is the most thrilling zombie flick you will see this year.
Yoo Gong leads the cast as Seok Woo the uptight father of Soo-an, a man who does not have time for his family as he is too focused on his job. Gong is strong in the role and obviously has fun with the action elements of the film. Soo-an Kim’s character feels more like a plot point and motivation for Seok Woo for most of the film, but she has some truly wonderful moments during the final act of the film, which show off her skills as a young actress. The rest of the cast features Yu-mi Jeong, Dong-seok Ma, Woo-sik Choi, Sohee and Eui-sung Kim.
Sang-ho Yeon’s screenplay follows the zombie movie conventions we have come to expect from the genre, but the addition of the train makes the film feel more urgent and frightening. The carriages in the train provide safe harbour or rooms of death, and it is as the characters make their way through the train that their fate is sealed. The screenplay also sheds a light on the arrogance of some of the characters, as they would rather throw others to the wolves than take the risk of falling foul of their humanity. There are times when the story seems to run out of steam, but there are some of the most thrilling and heartbreaking zombie transformations ever seen on screen in ‘Train to Busan’.
As director Sang-ho Yeon keeps the action going for most of the film, starting the zombie outbreak early, and without pages and pages of dialogue explaining what happened. We are as much trapped on the train as the characters are, and it is in their race to survive that the thrills of the film come clear. There are times when the story stumbles slightly, particularly in the final act, where things begin to feel rather drawn out and slow. The set pieces are thrilling and fast paced, and these are some of the most terrifying zombies we have seen on the big screen since ’28 Days Later’; fast and focused.
In all, ‘Train to Busan’ is a non-stop thrill ride that runs out of steam from time to time. The performances and relationships between the characters are strong, and there are plenty of characters to root for, and plenty to hate. ‘Train to Busan’ breathes new life into the zombie film genre, and makes survival thrilling, touching and often heartbreaking.
RATING: 4/5
Review by Brogen Hayes

LO & BEHOLD: REVERIES OF THE CONNECTED WORLD (USA/Club/98mins)
Directed by Werner Herzog
THE PLOT: In his new documentary, acclaimed filmmaker Werner Herzog casts his eye over something that we use every day and take for granted; the internet. Over the course of the film, Herzog looks at the Internet’s creation, its uses and dark side, as well as taking a look as to what the future may hold for us as we become ever more reliant on the internet both as a form of communication and as a way to automate our lives.
THE VERDICT: Although Werner Herzog’s film are beloved by fans of oddball filmmaking, there are times when Herzog himself is as famous as the stories he tells. The man has eaten his shoe as part of a dare, shot a film about ancient cave paintings in 3D and turned his hand to acting [‘Jack Reacher’, ‘Rick & Morty’, ‘Parks & Recreation’] and narrating [‘Go the F**k to Sleep’], but all of this aside, there is something very special about the way that Herzog looks at what most people consider to be the ordinary, and this skewed and interesting point of view is in full effect in ‘Lo and Behold: Reveries of the Connected World’.
When you consider that many of Herzog’s films are concerned with communication – or the lack thereof – it is hardly surprising that he has turned his eye to the Internet. Over the course of ‘Lo & Behold: Reveries of the Connected World’ – which takes its name from the first word ever communicated between computers; “Lo” – Herzog takes us through the birth of the internet, and reminds us of the fears associated with it – hacking, loss of identity, addiction, abuse – as well as the good that it has brought to the world, including games that have created gene therapies, self driving cars and education. The main question that Herzog asks is “how do we keep [the internet] running? How do we guard it?” but of course becomes more experiential and absurd as he takes a leaf from Philip K. Dick’s book and asks whether the internet is capable of dreaming of itself.
Through interviews with internet pioneers Ted Nelson and Leonard Kleinrock, Internet Protocol Designer Bob Kahn, Roboticist Sebastian Thrun, Astronomer Jay Lockman, Entrepreneur Elon Musk, and internet addicts Tom and Chloe, as well as convicted hacker Kevin Mitnick, and the family of a girl named Nikki who died in a horrific car crash; the pictures of which were leaked online, Herzog pulls apart the role that the internet plays in our society, and the risks that come with our reliance on it, before turning his eye to the future and where it seems that the service is going. There are times when Herzog’s narrative seems unnecessarily doom laden, but what becomes clear is that a scepticism of the internet and those that use it is probably wise. The question that Herzog keeps bringing up is one of love, and it seems clear that this basic human need is something that the internet can never give us, even as it simplifies our lives.
In all, there is plenty to giggle at in ‘Lo and Behold: Reveries of the Connected World’, including Herzog volunteering to go on a one-way trip to Mars, but there is plenty to also make us think more about the internet; something we reply heavily upon in our every day lives, and which many of us trust implicitly. Herzog has made another film that makes audiences think about the world around them, and this is when the filmmaker is at his absolute best.
RATING: 4/5
Review by Brogen Hayes