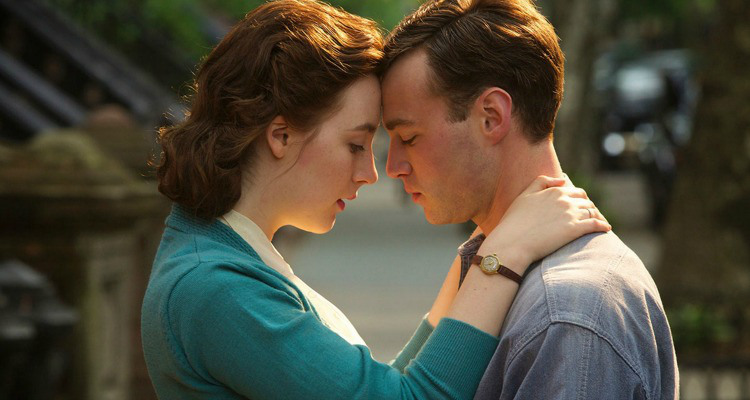 BROOKLYN (Ireland | UK | Canada/12A/111mins)
Directed by John Crowley. Starring Saoirse Ronan, Domhnall Gleeson, Emory Cohen, Emily Bett Rickards, Julie Walters, Jim Broadbent.
THE PLOT: In the 1950s, Eilis Lacey (Saoirse Ronan) emigrates from Enniscorthy to Brooklyn. Initially homesick, Eilis struggles to make friends in the big city, until she meets Tony (Emory Cohen), a young Italian man who she quickly falls for. When tragedy strikes and Eilis returns home for a visit, she is forced to choose between the life she left behind and her new one at the other side of the world.
THE VERDICT: Although perhaps best known for ‘Intermission’, ‘Brooklyn’ is not the first time that director John Crowley has delved into the world of gentle drama; he also directed ‘Is Anybody There?’ in 2008. With ‘Brooklyn’, Crowley has cemented his place as an Irish filmmaker on the world stage, and created a moving and warm look into the life of an Irish immigrant in the US.
Saoirse Ronan is wonderful in the leading role; both feisty and overwhelmed, with plenty of charm and wit. It is mostly through Ronan’s eyes that we see the film, and her homesickness and grief at leaving her home are writ large across her face. Domhnall Gleeson has a small role as Jim Farrell, one of the men who Eilis must choose between, the other, Tony, is played by Emory Cohen with a gentle charm. The rest of the cast is made up of Jim Broadbent, Brid Brennan, Emily Bett Rickards and Julie Walters in a fine turn as an over bearing Irish ‘mother’ to a boarding house full of young women in Brooklyn.
Colm Tóibín’s novel was adapted for the screen by Nick Hornby, who has drawn out the grief and the heartbreak of leaving home and everything you know behind, and blended in some honest truths. The screenplay deals with the concept of homesickness, and the conflict within Eilis as she tries to reconcile her feelings at wanting to get away and live her own life with her loyalty to her mother.
As director, John Crowley has created a slow and gentle film, and coaxed a stellar performance from Saoirse Ronan. The film does feel a little messy at times, as it jumps through time quite regularly, and from time to time, does not show how relationships between the characters have changed, only that they have. That said, the film is beautifully designed, and Ronan is at the top of her game, ably carrying this emotional and heartbreaking story of love and loss.
In all, ‘Brooklyn’ is a film about leaving your old life behind and starting a new one. The themes of love and grief are carefully explored here, and Ronan is on beautiful form in the leading role. There are times when the film jumps around in time a little too much, but the final effect is moving, endearing and heart warming.
RATING: 4/5
Review by Brogen Hayes

HE NAMED ME MALALA (United Arab Emirates | USA/PG/88mins)
Directed by Davis Guggenheim.
THE PLOT: “There is a moment when you have to choose whether to be silent or to stand up”. So says Malala Yousafzai who, in October 2012, at the age of 15, was shot in the head on a schoolbus, for daring to speak publicly about the rights for young women to be educated, under Taliban rule in her native Pakistan. The world watched as Malala recovered from her injuries, and didn’t give up her crusade. For the first time, Malala gets to tell her story on screen, and audiences get a peek behind the famous face, into her every day life.
THE VERDICT: The first thing that strikes you on watching He Named Me Malala, is just how remarkable this young woman is; not only was she shot in the head and recovered, but she has no problem talking to world leaders about issues she is familiar with, with a unique insight. Ask her to talk about boys, or the possibility of asking someone on a date however, and you are reminded just how young Malala Yousafzai really is, and what an incredible life she has led.
The film begins by explaining its title – Malala was named after a teenage girl named Malalai who, according to legend, encouraged the Afghan army not to give up in their fight against British troops in the 1880 Battle of Maiwand – which goes a long way to pointing out the similarities between Malala and her namesake. This is a subject that comes up time and again and, although many in Pakistan – where Malala’s book is banned – believe that she is a character, or someone who mindlessly repeats the words of her father, the film goes a long way to dissuade audiences from that notion, and stress that everything Malala has done in her young life was her choice.
From here, the film shines a light on the new life that Malala and her family find themselves living; from adjusting to life in the Western world, the effect that taking time off school has on Malala’s grades and her relationship with her parents and brothers. What emerges is a picture of a startlingly ordinary young woman who squabbles with her brothers and struggles to make friends in an unfamiliar world, who is also a world figure, beautifully eloquent and engaging.
Director Davis Guggenheim – who won an Oscar for 2007’s ‘An Inconvenient Truth’ – carefully balances the film to give a greater insight into the injustices that Malala speaks out about, her life as a public figure and her personal life with her family. The tales of the past are told through animated sequences that are beautifully done, with words being shown as light, and this is mixed with documentary and newsreel footage of Malala in her various roles as activist, sister and daughter. There is the feel, from time to time, that He Named Me Malala is a film aimed at teenagers to try and get them interested in activism, but Malala is such a fascinating person, this is hardly an issue.
In all, ‘He Named Me Malala’ is a look behind the scenes of one of the most famous activists of today, the youngest recipient of the Nobel Peace Prize and a young woman who could not be silenced with a bullet. The film is carefully constructed to give background to the public face of Malala, and does so incredibly well.
RATING: 4/5
Review by Brogen Hayes

SCOUTS GUIDE TO THE ZOMBIE APOCALYPSE (USA/15A/93mins)
Directed by Christopher Landon. Starring Tye Sheridan, Logan Miller, Joey Morgan, David Koechner, Halston Sage, Cloris Leachman.
THE PLOT: We open on Otto The Janitor (or thereabouts), messing around in the school lab when he unleashes a, well, zombie apocalypse just as best friends Ben (Sheridan) and Carter (Miller) try their luck at the liquor store before heading out into the woods for the major scout promotion of their buddy Augie (Morgan). Both know they’re getting a little too old for scouts, but Ben doesn’t quite have the heart to have Augie be the only remaining member of Scout Leader Rogers’ (Koechner) troop. The pull of pretty young girls – and, in particular, Carter’s sister, Kendall (Sage) – is proving pretty darn strong though.
Not that such growing pains really matter when your sleepy town is suddenly overrun with zombies, something the trio only discover after Ben and Carter’s latenight search for a secret party downtown. Soon, they’re hooking up with stripper Denise (Morgan) as they fight for survival, determined to rescue the oblivious Kendall and co at the all-night rave before the American military wipe out the town…
THE VERDICT: Just out in time to miss Halloween, ‘The Scouts Guide To The Zombie Apocalypse’ is the perfect blend of Superbad meets ‘Shaun Of The Dead’, and it really deserves to be one of the breakout hits of the year. As it stands, it’ll probably get buried in the mix, and find itself a cult favourite in years to come.
So, do yourself a great, big, fat favour, and go see it on the big screen while you can.
It’s not difficult to see what drew the likes of David Koechner (a man with a nose for smart comedies) and Cloris Leachman (think Betty White with tattoos) would be drawn to Christopher Landon’s clever and very often hilarious script. Having cut his fangs writing a bunch of Paranormal Activity sequels (and directing 2014’s ‘The Marked Ones’), Landon hits that rich vein between horror and comedy here, and he hits it hard. There are scenes here that are Farrelly Brothers-worthy, and every bit as funny.
The casting is spot-on too, with Tye Sheridan (‘Mud’, ‘Joe’, ‘The Tree Of Life’) clearly bound for Hollywood glory. Playing Scott Summers/Cyclops in next year’s ‘X-Men Apocalpyse’ – should help seal the deal.
A perfectly-formed little comedy horror.
RATING: 5/5
Review by Paul Byrne

KILL YOUR FRIENDS (UK/18/103mins)
Directed by Owen Harris. Starring Nicholas Hoult, Craig Roberts, Ed Skrien, James Corden, Georgia King, Edward Hogg, Tom Riley, Rosanna Arquette.
THE PLOT: Stephen Stelfox (Nicholas Hoult) is an amoral, arrogant and manipulative A&R man in the 1990s. Determined to find the next big thing – despite hating music – Stephen is willing to take down anyone who gets in his way… Often literally.
THE VERDICT: Based on John Niven’s book of the same name, ‘Kill Your Friends’ is the story of sex, drugs and rock and roll, but not on the part of the bands this time, on the part of the people behind the music, signing the bands. It is clear that Nicholas Hoult had a whale of a time playing the rather horrible Stephen, and this fun is infectious. While there is very little to actually like about this character, it is hard not to root for this violent anti-hero as he fights for his slice of the pie. Hoult is manic and manipulative, and has rarely been better.
The rest of the cast is made up of Ed Skrien, Craig Roberts, James Corden, Georgia King, Edward Hogg, Tom Riley, Jim Piddock and Rosanna Arquette in a blink and you’ll miss it role. They all do well with what they are given, but they definitely take their cues from Hoult here, as he curses, snorts and exploits his way through the film.
John Niven’s book was inspired by experiences he had working in the music business in the 1990s, and there is a feeling that there is something real about the entire film. The script stumbles, however, in too closely following the structure of a novel, and relying a little too heavily on Hoult’s admittedly necessary (but not that necessary) and entertaining voice over.
As director, Owen Harris makes sure the audience is painfully aware of just how dangerous the music business can be. The performances are great, but Harris never manages to quite get past the screenplay’s stumbles, no matter how many great songs – Beetlebum, Six Underground, Smack My B**ch Up – he manages to squeeze into the film. Add to this an entertaining character who seems to learn nothing through the film, other than new and inventive ways to get rid of the competition, and it seems that this film is trying just a little too hard to be Brett Easton Ellis.
In all, ‘Kill Your Friends’ is a highly entertaining film with many problems. Hoult is fantastic, but the deeper parts of the plot are not developed properly and although the audience may well find themselves rooting for this unscrupulous leading character, we are not always sure why. Still, the nostalgia created by the 90s soundtrack is definitely part of the gory, violent and amoral fun.
RATING: 3/5
Review by Brogen Hayes