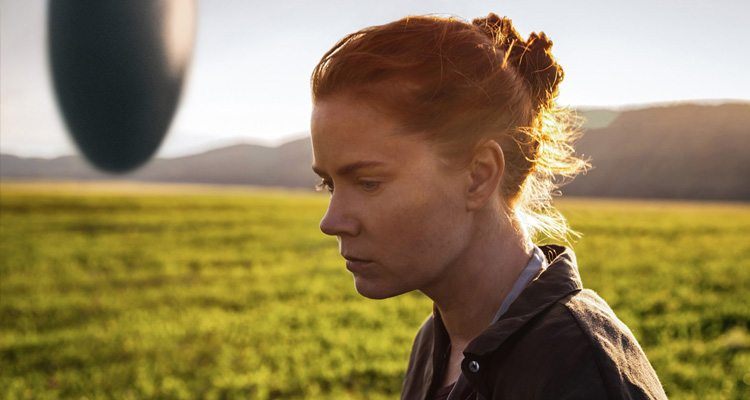 ARRIVAL (USA/12A/116mins)
Directed by Denis Villeneuve. Starring Amy Adams, Jeremy Renner, Forest Whittaker, Michael Stuhlbarg, Mark O’Brien
THE PLOT: When 12 alien craft arrive on Earth at different pints across the globe, the first thing everyone wants to know is why they are here. Language specialist Louise Banks (Amy Adams) is drafted into the arrival site in Montana to try and translate the alien language. All is not so simple however, and Louise and scientist Ian Donnelly (Jeremy Renner) have to first learn the alien language before they can begin to ask questions.
THE VERDICT: Based on the short story ‘The Story of Your Life’ by Ted Chiang, ‘Arrival’ marks the first foray into science fiction by director Denis Villeneuve – who previously brought us ‘Prisoners’, ‘Enemy’ and ‘Sicario’ – but will not be his last as he is currently working on a new version of ‘Blade Runner’. Those familiar with Villeneuve’s style will not be disappointed with ‘Arrival’; a film more about understanding than action.
It comes as no surprise that Amy Adams is on strong form as Louise Banks, and more than able to carry the film. Any emotion that the audience experiences comes from Adams’ performance, and although it may seem as though we do not learn much about the character – other than her dedication to her work – all becomes clear as the film moves forward. Jeremy Renner is a nice counterpoint to Adams, with their chemistry and respect for one another evident on the screen. Renner has considerably less to do than Adams, and seems to be there to back her up, but they are strong together on screen. The two are backed up by Forrest Whittaker, Michael Stuhlbarg, Tzi Ma and Mark O’Brien.
Eric Heisserer’s screenplay – adapted from Ted Chiang’s short story – focuses on the unsettling beauty of Montana and the fact that this is where the aliens chose to land. The script cleverly shows the audience much of the vital information in the story, rather than telling us, meaning that we are along for the journey with Louise Banks, and learning as she does. As well as this, this style of storytelling makes for a satisfying cinematic experience, even as we know we ill not quite get all the information until the closing moments of the film. As well as this, there is a serious twist to proceedings that is foreshadowed well, and although thus may not come as a surprise to the more astute audience members out there, it makes the film more one about communication than conflict.
As director Denis Villeneuve ramps up the unsettling feel of the film, but also keeps the beauty of the co-operation and the location evident, and the humanity on both sides of the species divide is all too real throughout ‘Arrival’. Villeneuve paces the film extraordinarily well for an alien arrival film that is not an action flick, and although there are very few set pieces throughout, ‘Arrival’ is a film that is full of suspense and intrigue, and keeps moving for all of its almost 2 hour running time. There are times when it looks as though ‘Arrival’ is going to way of ‘Contac’t, but this is quickly avoided, and although the closing moments of the film border on the twee and saccharine sweet, it is hard to pick this apart since we have been told all along that this is where it is going… It just gets there with a little sci-fi twist. Jóhann Jóhannsson’s score and Bradford Young’s beautiful cinematography enhance to action on screen, and reinforce the eerie feel of the film.
In all, ‘Arrival’ is an eerie, unsettling film about communication and language. Adams and Renner are on strong form and work well together, the script is smart and Denis Villeneuve’s direction is top notch. Those wanting a crash bang wallop alien flick need not apply, but if beautifully shot, eerily unsettling flicks about worlds beyond ours are your thing, then your film has… um… arrived.
RATING: 5/5
Review by Brogen Hayes

MOSCOW NEVER SLEEPS (Russia | Ireland/15A/101mins)
Directed by Johnny O’Reilly. Starring Evgenia Agenorova, Rustam Akhmadeyev,
Lyubov Aksyonova, Ieva Andrejevaite, Maria Armas
THE PLOT: ‘Moscow Never Sleeps’ follows several people on the day of Moscow’s City Day holiday, as they go about their daily lives; an ailing celebrity who wants to live life on his own terms, a young singer who is torn between two lovers, a teenage girl trying to find the strands of her family and a young man making a choice between the past and the present.
THE VERDICT: Taking a leaf out of the book of such films as ‘Magnolia’ and ‘Crash’, ‘Moscow Never Sleeps’ is a film that follows individual people as we learn how they all connect together. This is an interesting concept for a film, but without a strong statement to be made, ‘Moscow Never Sleeps’ feels like it never truly wakes up.
The cast of the film do well in their roles, even though none of them are truly given a lot to do. There is the feeling that each of the characters learns something throughout the film, but without a protagonist or a strong message, the performances never quite get going. The cast features Alexey Serebryakov, Evgenia Brik, Yuriy Stoyanov, Mikhail Efremov, Lubov Aksenova, Oleg Dolin and rising star Anastasia Shalonko.
‘Moscow Never Sleeps’ is written and directed by Irish man Johnny O’Reilly, we decamped to Moscow in the early 1990s. As someone who is both part of, and removed from Moscow and Russia as a whole, O’Reilly’s eye for the city is an interesting one, but the city that is the backdrop for all of these stories never feels as though it is cohesive, and even though these characters are all connected, it does not feel as though the city is. The dialogue in the film is fine, and there are some stories that are stronger than others and, once again, without a throughline, ‘Moscow Never Sleeps’ feels bitty and unfinished.
As directed Johnny O’Reilly gets strong performances from his actors, and the scenes work well enough as stand alones but it is bringing this tale together that the film stumbles. There is no political, physical or emotional event to say why this day is different for all of the characters in the film – apart from the fact that it is a national holiday – and the lack of connection is a problem for the film as a whole.
In all, ‘Moscow Never Sleeps’ explores characters in an interesting way but some of the characters are more engaging than others, and although all of the performances in the film are good, it would have been more rewarding to spend time with fewer stories that were properly fleshed out.
RATING: 3/5
Review by Brogen Hayes

THE LAND OF THE ENLIGHTENED (Belgium | Ireland | Netherlands | Germany | Afghanistan/15A/87mins)
Directed by Pieter-Jan De Pue. Starring Gholam Nasir, Khyrgyz Baj, Noor, Zulfu, Koko Ewas
THE PLOT: Child soldiers in Afghanistan patrol the deserts of the country, acting as bandits, while dreaming of the day that US troops finally pull out of their land.
THE VERDICT: ‘The Land of the Enlightened’ is a strange film to say the least. Documentary and fiction blend together to try and tell a story, but this ends up being spotty and confusing to the audience. As well as this, jumping between the kids and the US troops adds nothing to the story. Voice over tells the audience that Afghanistan is – according the myth and legend – God’s Garden that he gifted to the Afghan people, but they treat it as anything but. Drugs and ammunition flow freely here, as the children barter for everything they want in life, and run free and as wild, like a modern day version of Lord of the Flies.
There is a story to be told at the heart of ‘The Land of the Enlightened’, but the really interesting tale is that of the gang of child bandits. We never learn who they are, how they ended up in this situation or where their parents or guardians are, so it is hard to root for these drug running, violent kids. The plot is a mess, jumping from US troops shooting seemingly at nothing, to voiceover about Afghan myth, to these kids killing livestock and squabbling over the cooked animal’s brains.
In all, there is nothing really to learn from ‘The Land of the Enlightened’. There are times when a story could take place, and people about whom the audience is curious, but director Pieter-Jan De Pue never expands these, and seems to be happy enough just watching people drift around the Afghan wastelands, and squabble over a land where everyone is simply trying to survive. This ‘Lord of the Flies’-esque film simply does not answer the questions that it poses, and feels drifting and without a purpose.
RATING: 1/5
Review by Brogen Hayes