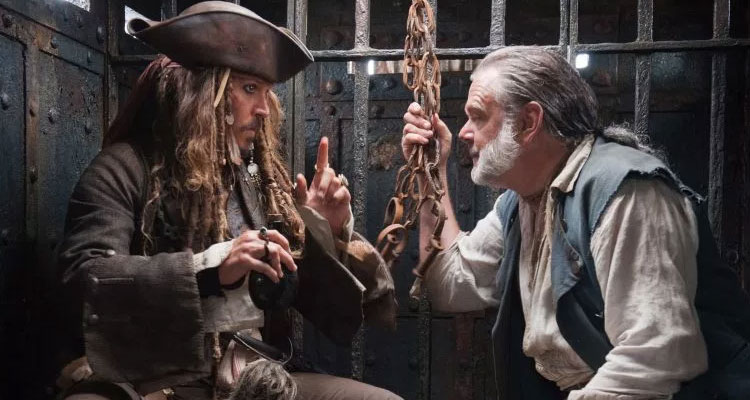 PIRATES OF THE CARIBBEAN: SALAZAR’S REVENGE (USA/12A/129mins)
Directed Joachim Ronning, Espen Sandberg. Starring Johnny Depp, Geoffrey Rush, Javier Bardem, Brenton Thwaites, Kaya Scodelario.
THE PLOT: A rebel without a crew, Captain Jack Sparrow (Depp) is in need of some luck. That it happens to be bad luck should hardly be surprising, as teenager Henry Turner (Thwaites) – son of living dead adventurer Will Turner (a brief opening cameo from living dead actor Orlando Bloom) – unwittingly unleashes an old nemesis, pirate slayer Armando Salazar (Bardem), on his tail. The race to find the Trident of Poseidon is on, with happily, richly retired Captain Hector Barbossa (Rush) dragged into a find-or-death bargain with the vengeful, hateful Salazar. Everybody’s got a curse to shake, and pretty much everyone blames Sparrow for their misfortune. Except, perhaps, bright young thing, Carina Smyth (Scodelario, channeling Keira Knightley when she was full of hope and dreams), a woman of science who, naturally, keeps getting condemned a witch by those bastard British colonists…
THE VERDICT: Despite many, many odds – being the fifth film in a trilogy – ‘Salazar’s Revenge’ turns out to be something of a hoot.
Largely, cleverly, a remix of 2003’s debut outing, ‘The Curse of The Black Pearl’, all the ingredients are here for a rollicking good time. A beautiful baddie in the jigsaw-shape of Javier Bardem’s vengeful ghost Captain Salazar, the big-budget, big ocean, National Geographic vistas (both above and under water), the reluctant young, feisty lovers, and the return of Depp’s Indiana Richards turn.
Still, for a good panto, you need more than just a loveable hero – you need a baddie you’d happily bring home to shock mother. And Bardem, unsurprisingly, fits the bill deliciously, his Salazar sure to give at least one kid per screening a nightmare or two. Nice.
RATING: 4/5
Review by Paul Byrne

THE RED TURTLE (France/Belgium/Japan/PG/80mins)
Directed by Michael Dudok de Wit. Starring the motion-capture performances of Emmanuel Garijo, Tom Hudson, Baptiste Goy, Axel Devillers, Barbara Beretta.
THE PLOT: Shipwrecked on a tropical island, an unnamed man manages to source fruit and water to survive, and is soon building a raft. Setting sail, a mysterious attack from below batters the raft asunder, and the man is forced to swim back to shore. Only to repeat the entire process again. And again. Eventually, the source of the attacks, a large red turtle, is spotted by the man, and when he happens upon the turtle on the island’s beach, he decides to take revenge…
THE VERDICT: Although ‘The Red Turtle’ is from the mighty Studio Ghibli, it plays far more like a European animated offering, in the vein of ‘The Man Who Planted Trees’ or even Biggs line-drawn beauties.
Actually the work of Dutch-born filmmaker Michael Dudok de Wit, who studied animation in England before serving time with London’s Richard Purdum Productions in the 1980s and then the Folimage studio in France. It was here that he produced the 1994 short ‘The Monk And The Fish’ (about a friar’s desperate pursuit of a fish through abstract landscapes), before moving to England and producing the Oscar-winning 2000 short ‘Father And Daughter’ (about a woman’s lifelong yearning for her absent father). The shorts caught the eye of Ghibli, a major influence on de Wit, and they got in touch. Happy for de Wit to make his film in Europe, and to have total control over the production, Ghibli were keen to stress that this didn’t have to be a Ghibli production, so to speak.
That the resulting film has its own particular style and pace is proof of that, and testament to Ghibli’s pure love of animation. Exploiting the brand has never been one of their weaknesses.
There will be some who will find de Wit’s film a little too slow and fable-esque, especially given that there’s no dialogue throughout, but, if you’re willing to let yourself go, and float down stream here with ‘The Red Turtle’.
RATING: 4/5
Review by Paul Byrne

THE OTHER SIDE OF HOPE (Finland / Germany/12A/100 mins)
Directed by Aki Kaurismaki. Starring Sakari Kuosmanen, Sherwan Haji, Simon Al-Bazoon
THE PLOT: Wikstrom (Sakari Kuosmanen) seems to have it all. He’s a businessman who in one swift stroke decides to not only quit his job as a travelling salesman, but also his marriage. Instead, he wants to run a restaurant business. He takes over the running of The Golden Pint, a local restaurant that has seen better days. Even the staff seem stiff and bored. At the other end of the scale is Khaled (Sherwan Haji). Waking up in a coal pit, he’s a Syrian refugee who has just arrived in Finland seeking asylum. He’s looking for his sister, but until then he has to go through the immigration process along with the Iraqi refugee he befriends, Mazdak (Simon Al-Bazoon). In time, the paths of Wikstrom and Khaled will pass…
THE VERDICT: Finnish auteur Aki Kaurismaki’s latest dramedy is very much wrapped up in that distinct Finnish humour of his. He has a very dry, deadpan sensibility when it comes to his writing. Characters seem to inhabit a world where the boredom of daily routine is the norm, but he finds a way to inject warm humour and pathos into the most absurd of situations. There are certainly some absurd situations here, like the day that Wikstrom decides to be trendy. He turns The Golden Pint into Imperial Sushi, with comical results that have a Fawlty Towers touch to it. Basil would be proud. That one scene alone is worth the price of admission.
For the first two acts, Kaurismaki builds up two separate storylines. Khaled’s story is touchingly human, as he navigates his way around the Finnish immigration system. His own story is marred by tragedy, having lost most of his family to a missile in war-torn Aleppo. His journey across Europe is a familiar one, even facing persecution from local thugs who show their ignorance/indifference by mistaking him for a Jew. Khaled is a lost soul trying to fit in to his new home, which makes his eventual run-in (or rather punch-up) with Wikstrom a decisive moment for both men.
Kuosmanen and Haji do solid character work here, no doubt helped along by Kaurismaki’s intelligent and witty script. There’s a fine line between comedy and drama. If there’s too much of either, then the script will come out muddled. Kaurismaki is deft at keeping that balance though, moving towards a conclusion that is satisfying… but also leaves you wanting more. Kaurismaki must feel that many things in life can be laughed at – and he’d be right there. A sense of humour is essential in getting through any adversity. ‘The Other Side Of Hope’ is classic Kaurismaki – funny, poignant and accessible at a very human level. If you want an alternative to Captain Jack Sparrow this week, then seek out this little gem.
RATING: 4/5
Review by Gareth O’Connor