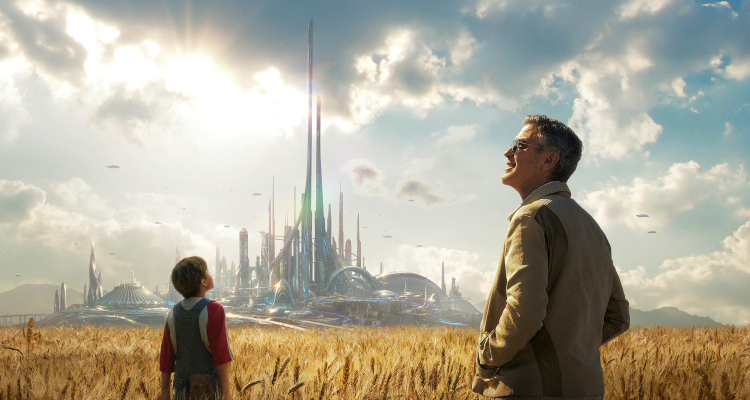 TOMORROWLAND (USA/PG/130mins)
Directed by Brad Bird. Starring George Clooney, Britt Robertson, Hugh Laurie, Thomas Robinson, Raffey Cassidy, Kathryn Hahn, Pierce Gagnon, Judy Greer.
THE PLOT: The adult Frank Walker (Clooney) seems to have lost his faith in tomorrow. That was yesterday, when the future “was different; the future was brighter”; today, Frank has gone full Boo Radley, hiding away inside his isolated, fortified, hi-tech house.
The young Frank Walker (Robinson) was obsessed with learning to fly. Or, given that his primetime childhood was the 1960s, learning to jet pack, thanks largely to his mum’s old Electrolux vacuum cleaner. Bringing his invention along to the 1964 New York World Fair, the young Frank sees his not-quite-finished jet pack dismissed by grumpy if curious judge Nix (Laurie), but admired deeply by the young Athena (Cassidy). So much so, she sneaks Frank in behind the curtain, to where the shiny, happy, slick Tomorrowland is being built.
Cut to 45 years later, and that same childlike wonder is clearly in Texan teenager Casey Newton (Robertson), a stargazing daydreamer who will stop at nothing – including sabotage – to keep the nearby NASA rocket launch site from being demolished. Her undeniable passion for a space-age future brings her to the attention of Athena – who hasn’t aged a day, and who reckons this might just finally be the one to spark Frank Walker back to believing in the future and thus help save Tomorrowland from becoming a Scientology wet dream.
THE VERDICT: Akin to Christopher Nolan’s INTERSTELLAR, Tomorrowland sees Brad Bird embracing his beloved retro-future for yet another rollicking rocket ride (following 1999’s THE IRON GIANT and 2004’s even more towering, perfect, poptastic Pixar pic, THE INCREDIBLES) – and again, he makes us believe in that there might just be a satellite of love out there.
You know it’s a big deal when you get to feck with a major studio’s logo, but then again, this is Disney now celebrating Disney then, a synergy motherload that, if they’re lucky, will hit like PIRATES OF THE CARRIBBEAN. If they’re unlucky, it’ll miss like The Haunted Mansion, another Disney theme park favourite that got the big-screen, big-star treatment.
TOMORROWLANS will probably land somewhere between the two, being a little too cerebral for full-on fan fever, but sweet enough to benefit from solid word-of-mouth. Beyond Bird’s typically tantalising direction, and a nifty script that manages to pull all the space-time continuum craziness together, this is a well-cast film. Clooney, as expected, does a damn fine Clooney, the Robinson boy is spot on as Clooney’s Mini-Me, Cassidy is A113 as the bastard child of Mary Poppins and BLADE RUNNER’s Rachael, whilst as the teenage Casey, Britt Robertson has all the quiet energy and wry grit of a slightly younger Jennifer Lawrence.
And if all that doesn’t grab you, near the end, you do get to see one of Hollywood’s most famous humanitarians throw a young girl to her very splattery death. Nice.
RATING: 4/5
Review by Paul Byrne

POLTERGEIST (USA/15A/93mins)
Directed by Gil Kenan. Starring Sam Rockwell, Rosemarie DeWitt, Kennedi Clements, Saxon Sharbino, Kyle Catlett, Jared Harris, Jane Adams, Susan Heyward, Nicholas Braun, Karen Ivany, Patrick Garrow.
THE PLOT: With the Great Recession biting hard, young couple Eric (Rockwell) and Amy (DeWitt) have to downsize if they’re going to provide for their three kids. And that means moving into a slightly ramshackle and rundown old house, right on the abandoned outskirts of Illinois. Not that their youngest daughter, Maddy (Clements), is disappointed – on their very first tour of the house, she manages to make some new invisible friends. When anxious middle child Griffin (Catlett) stumbles upon Maddy talking to the living room TV, he’s not exactly delighted to hear his little sister say, “They’re here”. They being, Maddy informs her brother, “the lost people”. Suddenly, Griffin has plenty of reason to feel paranoid. And so too do the rest of the family, as the lost people make their presence felt…
THE VERDICT: You can tell you’re dealing with at least good intentions on a remake when you see people like Sam Rockwell and Rosemarie DeWitt toplining. These are solid character actors who really won’t want to besmirch their good name with a lame, half-ass Hollywood rehash. And so it proves here, Rockwell and DeWitt not the only good things about Fox’s reboot of the 1982 haunted house hit.
Back then, POLTERGEIST was just what you might expect when you put Tobe Hooper (the director of the original, and the best, TEXAS CHAINSAW MASSACRE) with producer Steven Spielberg (the director of pretty much every 40- and 50something’s childhood). A hard double-act to follow, but here, director Gil Kenan – who cut his teeth on MONSTER HOUSE and CITY OF EMBER – manages to take a well-worn classic and find new inroads, new thrills, new twists and a few new taser turns.
This is the godfather of PARANORMAL ACTIVITY – and so many other pale imitations – taking its crown back. With style and panic.
RATING: 4/5
Review by Paul Byrne

A FULLER LIFE 80mins (IFI)
Directed by Samantha Fuller. Starring Samuel Fuller, Jennifer Beals, Robert Carradine, Joe Dante, Bill Duke, Clarke Duke, James Franco, William Friedkin, Mark Hamill.
THE PLOT: Based on the full-on filmmaker’s posthumous 2002 autobiography A Third Race, this documentary by Sam Fuller’s daughter Samantha charts his life more than his work. Chapter after chapter of Fuller’s book is read aloud by various associates and admirers of the man who brought us such American New Wave hits as The Naked Kiss (1964) and Shock Corridor (1963) and later favourites, such as 1980’s The Big Red One. His daughter is more interested in the life than the work though – and so, we hear of Fuller’s days as a WWII infantryman, his days as a newsboy, and a scriptwriter, before Hollywood finally succumbed…
THE VERDICT: Perhaps because the Fuller family don’t actually own Samuel Fuller’s films, this loving portrait of the filmmaker as a man rather than an artist will ultimately only be of real interest to real fans. And even then, there will be nothing new to savour here, other than the mild thrill of having mildly famous people read out pages from a 13-year-old autobiography.
Still, as family affairs go in the Hollywood game, this is an undeniably affectionate and sometimes affecting love letter from a daughter to a legendary father. Which is mildly ironic, given that A FULLER LIFE is about as far removed from its subject’s notorious “bold style” of filmmaking.
RATING: 3/5
Review by Paul Byrne

A GIRL WALKS HOME ALONE AT NIGHT (USA/TBC/101mins)
Directed by Ana Lily Amirpour. Starring Sheila Vand, Arash Marandi, Marshall Manesh, Mozhan Marnò and Dominic Rains.
THE PLOT: In the Iranian town of Bad City, the lonely, cruel and desperate townspeople are unaware that there is a vampire in their midst. Clad in a hijab and riding a skateboard, The Girl (Shiela Vand) stalks the residents and exists in solitude, until she meets the lonesome Arash (Arash Marandi).
THE VERDICT: Perhaps not surprisingly, A GIRL WALKS HOME ALONE AT NIGHT is the first vampire Western to come out of Iran, what may surprise viewers, however, is how dark, beautiful and atmospheric this film is, and how universal the story actually is. Although the film is set in Iran, A GIRL WALKS HOME ALONE AT NIGHT could actually be set anywhere in the world, and such is the film’s wonderful charm.
Sheila Vand is mesmerising in the lead role; her curious eyes often seem to fill the screen and although she is not actually the central character in the film, and we learn little about her, she hovers over the whole affair like a ghoul. Arash Mirandi swings between patient and kind, and cruel and opportunistic in the film, but audience sympathy lies with his character, as he is the most innocent and open of the characters. The rest of the cast is made up of Marshall Manesh as Arash’s father Hossein, Mozhan Marnó as Atti and Dominic Rains as Saeed.
Ana Lily Amirpour’s screenplay is one that is not weighed down by dialogue and exposition. Instead, the audience is invited to go on this highly stylised but engaging journey with the characters, as their town’s influence changes due to the presence of one person. Beautifully shot in black and white, the film drips with rich atmosphere and, while there are gory and violent scenes, these are turned beautiful through the black and white cinematography.
As director Amirpour fills the film with tension and a dark atmosphere, while allowing The Girl to take moments of stillness and display odd, twisted kindness to the people she deems worthy of her protection. The film is also an awkward ‘teen’ romance, and the relationship between The Girl and Arash is gentle and rather sweet, making this the film that TWILIGHT wishes it could have been. That said, there are moments when the film’s pacing drags its heels, meaning the still atmosphere begins to stagnate.
In all, A GIRL WALKS HOME ALONE AT NIGHT is a wonderfully dark, twisted and romantic tale with a killer soundtrack and oodles of style. The cinematography and abandoned feel of the town heighten the whole affair, but some dodgy pacing means the film suffers from time to time.
RATING: 4/5
Review by Brogen Hayes

MOOMIN ON THE RIVIERA (Finland/France/G/80mins)
Directed by Xavier Picard, Hanna Hemila. Starring the voices of Russell Tovey, Tracy Ann Oberman, Nathaniel Parker, Stephanie Winiecki, Ruth Gibson, Philippe Smolikowski, Dave Browne.
THE PLOT: They may look like your average hippopotamus, but the Moomins, we are assured by patriarch Moominpappa, are in no way related to that sub-Saharan mammal. Even if, despite walking on their hindlegs, they look darn like ‘em. After a brief encounter with some pirates, the Moomins decide to go on a holiday, leaving Moominvalley behind as they set sail for the French Riviera. Planting themselves in the royal suite of a fancy hotel without realising just how much it’s going to cost, the Moomins soon befriend the Marquis Mongaga (Smolikowski), whilst Snorkmaiden (Winiecki) finds herself the object of affection for wealthy playboy Clark (Browne). Much to the chagrin of Moomin (Tovey), who heads off to camp on the beach with Moominmamma (Oberman). And that’s when things get mildly interesting.
THE VERDICT: A gentle Finnish creation akin to Hayao Miyazaki’s Barbar – or is Maurice Sendak’s Peppa Pig? – there’s an undeniable charm to the Moomins, first created by Swedish-speaking Finnish illustrator and writer Tove Jansson in 1945. It’s worth noting that, over 48 years, there were nine books, five picture books and a comic strip released. Later, The Moomins inspired numerous TV series, films and, naturally enough, a theme park in Naantali, Finland.
So, you know, these rotund little fellas know what they’re doing. They just don’t do anything particularly notable here, their Riviera adventure a little more Mr. Bean’s Holiday than Mr. Hulot’s. Still, the little ‘uns could very well love it. And you have to admire the sweet little trick of having one character ask his cousin to take his place in the story, as he’s off to get married.
RATING: 3/5
Review by Paul Byrne