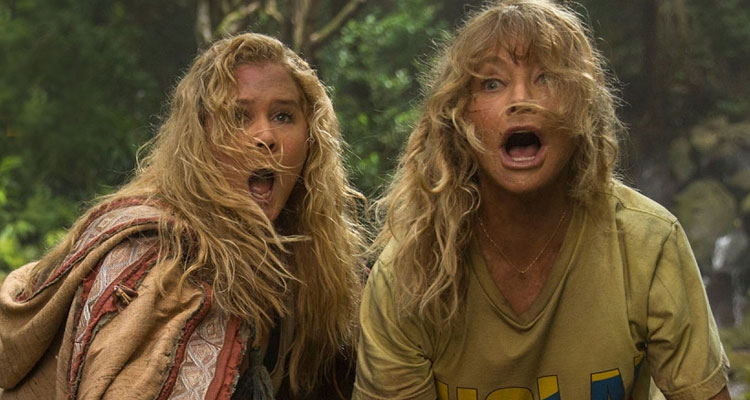 SNATCHED (USA/15A/90mins)
Directed by Jonathan Levine. Starring Amy Schumer, Goldie Hawn, Ike Barinholtz, Joan Cusack, Wanda Sykes
THE PLOT: After she is dumped by her boyfriend, Emily (Amy Schumer) can’t find anyone to take his spot on her dream holiday to Ecuador, other than her over protective and paranoid mother Linda (Goldie Hawn). Not long after the two arrive in Ecuador, they are kidnapped by violent gangsters, and must find a way to survive.
THE VERDICT: ‘Snatched’ is written by Katie Dippold, a writer who has made a name for herself in writing scripts for female-led comedies, including ‘The Heat’ and the recent ‘Ghostbusters’ reboot. The trouble with ‘Snatched’ is that it relies on one joke, an annoying basic botch lead character and criminally underuses some great actors.
The cast is led by Amy Schumer, who makes Emily a basic, bratty and selfish character; the kind of character she usually sends up in her TV sketch show. The joke quickly wears thin with Emily, and it is hard to shake the feeling that Emily is a character that is aimed at making young millennials laugh at the older millennials who have never quite got their lives together. Goldie Hawn does not fare much better as the overprotective Linda, who seems only to be on board to bicker with Schumer. The rest of the cast features Ike Barinholtz as Emily’s agoraphobic brother Jeffrey; a fully annoying and bratty character that has very little to redeem him. Also featuring in ‘Snatched’ are Wanda Sykes as Ruth, a character that talks far too much, and Joan Cusack as Barb, a character who does not talk at all, which seems like a horrible underuse of a wonderful actress.
Screenwriter Katie Dippold seems to have had the idea of the kidnapped behaving more badly than the kidnappers, and this is the main basis for the film; a joke that wears thin very quickly. Also the desperation of Emily as a character makes it hard for the audience to relate to her, and makes her feel as though she simply could not exist in the real world. The jokes do not land for much of the film, and the overall feel of the film becomes drawn out and tiresome very quickly.
Director Jonathan Levine never manages to get the pacing of ‘Snatched’ moving, leaving it feeling drawn out and overly long. The comic timing of the film is also lacking, leaving characters feeling more crass than comedic, and never manages to shake off the slow, annoying feel of the film.
In all, ‘Snatched’ is simply not funny, and ultimately feels tiresome and boring, and offensive, although not inclusively offensive. The central joke of the film wears thin very quickly, and the rest of the laughs are sadly missing although the holes in the film for the jokes are obvious and glaring. ‘Snatched’ should have been smart, funny and over the top, but it fails at every single hurdle.
RATING: 2/5
Review by Brogen Hayes

KING ARTHUR: LEGEND OF THE SWORD (USA/12A/126mins)
Directed by Guy Ritchie. Starring Charlie Hunnam, Jude Law, Eric Bana, Aidan Gillen, Djimon Hounsou
THE PLOT: After his family is murdered in a violent coup, young Arthur (Charlie Hunnam) escapes to Londinium and makes a life for himself in back streets of the city. When the King of England Vortigem (Jude Law) becomes afraid for his throne after a mysterious sword in a stone appears at Camelot when the water recedes, Arthur, as well as all other men his age, are rounded up to try and pull the sword, and prove they are the true King of England so Vortigem can do away with them forever. After Arthur reveals himself as King, he must face his past, and fight for his future.
THE PLOT: It seems that cinema has always been fascinated with the Arthurian Legend, and there have been many adaptations of the tale over the yeas. Although the last high profile version of the story was in 2004, there have been many smaller productions in the intervening years before Guy Ritchie felt it was time to put his spin on the tale. The trouble is that ‘King Arthur: Legend of the Sword’ feels as though it is several movies smashed together, and has serious problems with tone, performance and energy.
The cast of ‘King Arthur: Legend of the Sword’ features some seriously familiar faces, including Jude Law, Charlie Hunnam, Aidan Gillen, Freddie Fox, Djimon Hounsou and Eric Bana, but none of them seem to know which film they are in, and struggle with creating their characters, the energy of the story and the tone of the film.
The screenplay for ‘King Arthur: Legend of the Sword’ was written by Joby Harold, Guy Ritchie and Lionel Wigram, and was apparently considerably rewritten by producer Wigram and director Guy Ritchie. The end result has the feeling of ‘Lord of the Rings’ meets ‘Snatch’, but in the worst possible way. The anachronistic dialogue and accents of the characters feel completely out of place with the magical elements of the tale, and the most fun moments come when the film forgets to take itself so seriously, but these moments are few and far between.
As director Guy Ritchie has created a dark, gloomy and CGI heavy film that is a tonal mess. The magical elements do not sit with the more typical “Guy Ritchie” moments in the film, and feel as though they come from two different stories. The characters are badly realised and performed, as it seems that the actors are struggling to marry the Cockney and mythical tones of the film together.
In all, ‘King Arthur: Legend of the Sword’ is dark, gloomy and a tonal mess. There is very little fun to be had with the film, and any of the laughs that are had feel entirely unintentional. The legend of King Arthur is a fascinating tale, but there is little to celebrate with Guy Ritchie’s messy and uninspiring film. Oh and the less said about the David Beckham cameo, the better.
RATING: 2/5
Review by Brogen Hayes