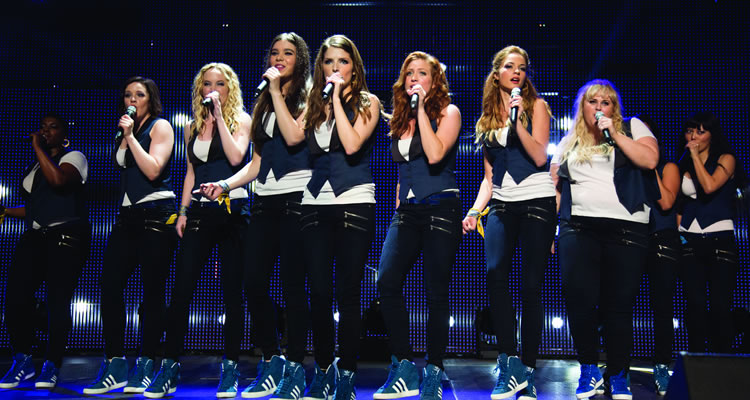 PITCH PERFECT 2 (USA/12A/115mins)
Directed by Elizabeth Banks. Starring Anna Kendrick, Rebel Wilson, Hailee Steinfeld, John Michael Higgins, Elizabeth Banks, Birgitte Hjort Sorensen, Flula Borg, Alexis Knapp, Anna Camp, Ben Platt.
THE PLOT: After a wardrobe malfunction for Fat Amy (Wilson) during a performance for President Obama reveals a little too much down under of the self-elected leader of The Barden Bellas, the ensuing Muffgate scandal propels the all-girl a capella group being suspended by the governing body’s leading lights, Gail (Banks) and John (Michael Higgins). Worse, their position on the world stage is going to be taken by the European champions, Das Sound Machine, a highly efficient and sharply choreographed outfit that may very well have been created by Kraftwerk in a lab. And so, it’s off to world championships in Copenhagen, to do battle with what Amy likes to call “a bunch of Deutschbags”.
THE VERDICT: The first outing having proved a surprise if not exactly blockbusting hit, it’s a welcome surprise to find that the second Pitch Perfect offering is even better than the 2012 original. That this also marks the directorial debut of the always-watchable Elizabeth Banks is also a welcome surprise – this woman knows funny, and now she can teach other people how to be funny too.
Indeed, there’s much to like-verging-on-love about PITCH PERFECT 2 – the Christopher Guest-esque shenanigans boasting a cast who are all present and very correct in their roles, a plot that gives them a lot of room to be funny, and gags that come smart and fast. In fact, everything here is in pretty much perfect harmony. Hurrah!
RATING: 4/5
Review by Paul Byrne

CLOUDS OF SILS MARIA (France | Switzerland | Germany | USA | Belgium/15A/124mins)
Directed by Olivier Assayas. Starring Juliette Binoche, Kristen Stewart, Chloë Grace Moretz, Lars Eidinger, Johnny Flynn, Angela Winkler.
THE PLOT: Maria (Juliette Bioche) finds herself facing the fact that she is growing older when she is approached to star in the same play that made her famous as a 20 year old actress, only this time she is to play the part of the older woman, and allow a younger actress to play the role she made famous. Struggling to learn her lines and to find a place where she belongs in her career, Maria’s frustrations become evident as she argues with her personal assistant Valentine (Kristen Stewart).
THE VERDICT: There is something familiar about CLOUDS OF SILS MARIA, with Birdman only just in our collective rear view mirror, here comes another film about an actor trying to find where they belong in their career as they grow older. That said, CLOUDS OF SILS MARIA was screening at festivals around the world while BIRDMAN was still being made, and there is also something of ALL ABOUT EVE and SNSET BOULEVARD about the film, which makes this film, effectively a two hander between Binoche and Stewart, a fascinating one.
Juliette Binoche is on fantastic form here as Maria, and allows the character’s fear about where she belongs now she is growing older to be the lynchpin of the entire film. Kristen Stewart is perhaps the best she has ever been, and gives a wonderfully honest performance as a young woman who sees the world in a different way than her older employer, and the chemistry between the two is wonderful. Elsewhere, Chloe Grace Moretz embraces the young tabloid hungry starlet with aplomb, although there are some of her scenes that ring somewhat hollow.
The story, written by Olivier Assayas and based on an idea by Juliette Binoche, blends together fiction and reality cleverly, so the film feels like life imitating art imitating life. The dialogues between Binoche and Stewart as they run lines for the film feel honest and relatable, and there is a healthy dose of awareness of her own myth on the part of Stewart, as Valentine hammers many points on the nose that were true in Stewart’s own personal life. This doesn’t seem to be coincidence, however, as Stewart lobbied for the part having first been offered the role of Moretz’s young ingénue.
Olivier Assayas directs with care, making the dialogue heavy film feel real and honest, with the interactions between the women at the centre of the film taking centre stage, but never overwhelming the film, and allowing the audience to learn more about the characters through their interactions with one another. Just as things take a turn for the predictable, a mystery is introduced to the film, which turns the story on its head.
In all, CLOUDS OF SILS MARIA contains powerful performances from Binoche and Stewart, whose chemistry and ease with one another makes the film work. There is plenty to ponder here, and enough comedy to stop the film from sinking into a depressive tale about an aging actress. The comparisons with BIRDMAN, ALL ABOUT EVE and SUNSET BOULEVARD stand, but Olivier Assayas’s film tells the story in a new and engaging manner.
RATING: 5/5
Review by Brogen Hayes

LAMBERT & STAMP (USA/IFI/117mins)
Directed by James D. Cooper. Starring Kit Lambert, Christopher Stamp, Roger Daltry, Pete Townsend, Terence Stamp, Irish Jack, Robert Fearnley-Whittingstall.
THE PLOT: Charting how young enterpreneurs Chris Stamp and Kit Lambert who, having become managers of West London group The High Numbers, set out to make a film about them. Only for The High Numbers to turn into The Who. And go on to become one of the biggest bands in the world.
Talking to Stamp and surviving Who members Roger Daltrey and Pete Townsend, just how The Who became one of the biggest bands in the world, and what role their co-managers played in that, are explored here…
THE VERDICT: The jigsaw of the swinging ‘60s continues to have more pieces than even the most dedicated lifer could handle, and the idea that we’re now making documentaries about those at the side of the stage rather than actually performing on it doesn’t exactly make the heart skip a backbeat. And yet, making his feature debut, director James D. Cooper has unearthed a pretty fascinating story, shining a light on a time when the idea of rock gods being created as an art project was first beginning to take hold. Lambert and Stamp had no real intention of rock stardom for their four likely lads; this was pure theatre, Leo Burnett-meets-Andy Warhol. It was all merely Lambert and Stamp’s gateway into film, a cinematic and scientific experiment that would be their celluloid calling card. The Who began life as Monkees, as Boyzone, as a bunch of boys playing the role of pop idols. That they would become rock gods was a surprise to all, including Daltrey and Townsend.
RATING: 4/5
Review by Paul Byrne

THE TRIBE (Ukraine/The Netherlands/Club/132mins)
Directed by Miroslav Slaboshpitsky. Starring Grigoriy Fesenko, Yana Novikova, Rosa Babiy, Alexander Dsiadevich, Yaroslav Biletskly, Ivan Tishko, Alexander Oadchiy, Alexander Sidelnikov, Alexander Panivan.
THE PLOT: It’s Kiev, present day, and Sergey (Fesenko) quickly becomes a member of a student gang when he arrives at a boarding school for deaf kids. Leader of the gang is the woodwork teacher, who orchestratest the petty theft, prostitution, and whatever else will bring in some money. Sergey takes a leap up the ranks when one of the gang’s pimps is killed in an accident, taking over the deceased’s prostitutes – including Anna (Novikova), whom Sergey soon falls in love with. Despite the fact that she’s dating someone else, the two begin an affair, with Sergey determined that the two of them will break free and run away together. But, it may not be so easy…
THE VERDICT: A daring debut from young Ukranian filmmaker Miroslav Slaboshpitsky, THE TRIBE has a main cast who only speak in Ukranian sign language, and yet there are no subtitles, whilst the lenght of the single-shot takes here would have even David Lean tapping his watch. Right from the start, you know you’re watching art here. Thankfully, The Tribe also boasts a fine kick-ass script. Then again, it would have to, right?
Not that The Tribe is an easy watch. There’s an air of Haneke here, of Kubrick at his most clinical, with the masterful set pieces sometimes merely adding to the sense of voyeurism and even culpability, as the brutal beatings and sexual bullying unfold in the best possible taste, and light.
RATING: 4/5
Review by Paul Byrne