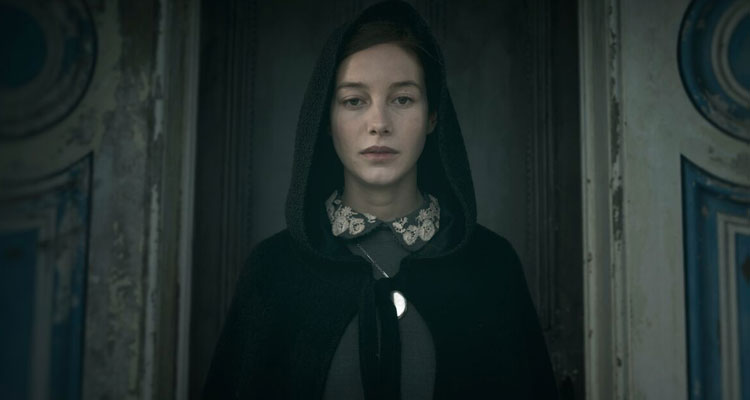 THE LODGERS (Ireland / 15A / 93 mins)
Directed by Brian O’Malley. Starring Charlotte Vega, Bill Milner, Eugene Simon, David Bradley.
THE PLOT: Ireland, 1920. With the War Of Independence not far away, tensions exist between the native Irish and the occupying British. Anglo-Irish twins Rachel (Charlotte Vega) and Edward (Bill Milner) live a secluded life in their family mansion. Regarded with suspicion by the locals, they believe that they are cursed to live and follow in the footsteps of their incestuous parents. They live by strict rules set down by otherworldly guardians who come out at night and are known only as The Lodgers. They must be in bed by midnight, they must not escape the house, they must not admit a stranger. But a stranger comes calling in the form of returning soldier Sean (Eugene Simon), to whom Rachel is attracted…
THE VERDICT: Director Brian O’Malley follows-up his eyecatching, full-on gorefest ‘Let Us Prey’ with something altogether different. The Lodgers is a moody, humourless ghost story about the legacy of evil and how it’s passed down through generations. David Turpin’s script sets up the twins early on, establishing their close relationship (though not too close) and a doom-laden prophecy that may or may not come true.
It’s a story that’s ripe for character development, but the film is disappointingly rather short on that. The twins are sketched in small brush strokes, lacking the greater depth that the story demands. Even less attention is paid to Sean and his budding romance with Rachel. It appears out of nowhere, as if they were lovers who hadn’t seen each other in years. A potentially fascinating backstory involving The Lodgers and how evil trickles through is merely hinted at, left to suggestion when it needs to be brought to the fore.
Technically, it’s a well-made film. There’s good use of the gloomy corridors and chambers of Loftus Hall in Wexford, adding to the gothic atmosphere. The mournful music by Kevin Murphy, Stephen Shannon and David Turpin hints at impending doom. The performances are decent too. However, it’s hard to shake off a familiar feeling that it’s a clear case of style over substance. Too many psychological horror films rely on that old chestnut – oily, black eels to create a sense of unease (e.g. the under-rated ‘A Cure For Wellness’). O’Malley falls back on this cliché.
There are some eerie visual metaphors for drowning and ghostly figures, but there’s no real attempt to connect them to the story that is unfolding. Just another pale shape in the dark etc. If more attention had been paid to the story rather than the cinematography, then it could have been a more balanced affair. It’s also uncertain as to who this film is for. It’s not scary enough for horror fans, too eerie and artistic for mainstream audiences. ‘The Lodgers’ is something of a curio, which could be embraced by some viewers. Just not this one.
RATING: 2 / 5
Review by Gareth O’Connor

MOM AND DAD (USA / TBC / 85 mins)
In short: Demented
Directed by Brian Taylor. Starring Nicolas Cage, Selma Blair, Anne Winters, Zackary Arthur, Lance Henriksen.
THE PLOT: The Ryans seem like your average American nuclear family. However, Brent (Nicolas Cage) and wife Kendall (Selma Blair) have grown apart from their kids, teenager Carly (Anne Winters) and tween Josh (Zackary Arthur). Unsatisfied with how their lives have turned out, Brent and Kendall go about their daily routines. Except for the fact that today is no ordinary day. Either there’s something in the water or parental protective instincts have got re-wired in an instant, prompting parents everywhere to react violently, even murderously, towards their children. With societal structures collapsing and the nuclear family going into meltdown, Carly and Josh will have to do what it takes to survive…
THE VERDICT: ‘Mom And Dad’, the latest film from ‘Crank’ co-director Brian Taylor, is a gleefully demented and admirably irresponsible piece of filmmaking. Throwing all good taste out the window, Taylor launches you full throttle into a suburban nightmare fuelled by random violence. It’s parents vs children in a battle royale, which determines who has the guts to go for the guts. It’s far more effective in depicting the troubled underbelly of family life than last year’s weak, confused ‘Suburbicon’.
Taylor’s tight, witty script packs a lot into a streamlined running time, taking the time to occasionally flesh out the characters via flashbacks. This is particularly welcome in understanding how the Ryans tick. At one point, Brent bemoans the fact that he is older and now just ‘Dad’ rather than Brent. He obviously didn’t get the memo that your own life ends when you have kids (sort of). Kendall has her own unfulfilled dreams, but has passed the running of the house to her live-in maid. How they interact with their precocious kids is important in understanding what transpires later on, when events go off the rails and into frantic, action-packed ‘Home Alone’ territory.
This is where the film comes into its own, with the performances turning on a dime and all manner of kitchen utensils come into use. Taylor cranks the adult performances up to 11 here, but it works well given the storyline. Blair’s switch comes very suddenly and subtly, while Cage hints that something is a bit off about Brent early on. Cage has a lot of fun here, playing into audience expectations of his rock-n-roll persona, while making Brent something of a sympathetic character (it’s his favourite film of the last decade). Winters and Arthur more than hold their own as the kids, resourceful and as strong as their parents.
Taylor goes a little too far in some scenes (e.g. the disturbing hospital scene) and perhaps not far enough in others. Showing parents standing outside a school window like patient zombies is a great, suspenseful set-up but then decides not to follow-up on that. However, Taylor gets the tone of the film just right, prompting you to laugh inappropriately no matter how crazy the story gets (and it gets really crazy at the end). He clearly wants you to be in on the joke as much as he is. For that alone, ‘Mom And Dad’ comes recommended. It’s a domestic horror that would sit comfortably in a double bill with the similarly subversive Better Watch Out. Forget the kids, worry about the parents. It’s all their fault, right?
RATING: 3.5 / 5
Review by Gareth O’Connor

GRINGO (Australia | USA/15A/110mins)
Directed by Nash Edgerton. Starring David Oyelowo, Joel Edgerton, Charlize Theron, Sharlto Copley, Amanda Seyfried.
THE PLOT: Harold (David Oyelowo) has worked hard all of his life, and from the outside his life seems to be perfect. When he travels to Mexico with his shady bosses Elaine (Charlize Theron) and Richard (Hoel Edgerton) however, he quickly realises that his job is on the line, he is drowning in debt and his wife (Thandie Newton) is about to leave him. Seeing a chance to start a new life, Harold fakes his own kidnapping with the hope of cashing in on the insurance policy the company has on him. Little does he realise that there are a lot of ulterior motives going on, and Harold’s life may be more in danger than he first thought.
THE VERDICT: Having made a career for himself playing roles such as Dr Martin Luther King Jr in ‘Selma’, D.A. Lawrence in ‘A Most Violent Year’ and Louis Gaines in ‘The Butler’, it is surprising and utterly refreshing to see David Oyelowo turn his hand to comedy in its darkest, blackest form, and come out as the best thing in a muddled movie.
It is clear that Oyelowo is having the time of his life playing Harold, who he plays as a sweet and gentle character driven to the edge of his patience when everything goes wrong for him. Oyelowo makes sure that Harold is a rounded, relatable character, then adds the manic comedy on top, making Harold an incredibly successful character. Elsewhere Charlize Theron returns to dark and twisted comedy with Elaine, an unscrupulous woman who has no problem stepping over people to get what she wants, and Joel Edgerton plays Richard, a horrible person who, of course, has managed to do well. The rest of the cast features Thandie Newton – who is wasted in her role – Paris Jackson in her film debut, Amanda Seyfried, Harry Treadaway and Sharlto Copley.
The screenplay, written by Anthony Tambakis and Matthew Stone tries to be a screwball black comedy, and on some levels it works, but in bringing in what feels like a million subplots, the writers soon find themselves contending with plot holes, characters that definitely do not need to be there and a manic feel that seems to come from the panic to make the script work, rather than the action on screen.
Director Nash Edgerton – yes, Joel’s brother – does well with the first half of the film, but struggles with the pacing throughout, making it feel drawn out and overly long. The film takes far too long to get where it is going, and Edgerton often struggles to bring everything together in a way that makes any kind of narrative sense. There are characters that do not need to be in the film, and so clutter it up, and there are times when the audience – as well as Harold – are left wondering just what is actually going on.
In all, ‘Gringo’ is a film worth seeing just for David Oyelowo’s wonderful, zany, screwball performance. The rest of the film struggles under the weight of drawn out pacing, a muddled script, plot holes and silliness for the sake of it.
RATING: 2.5/5
Review by Brogen Hayes