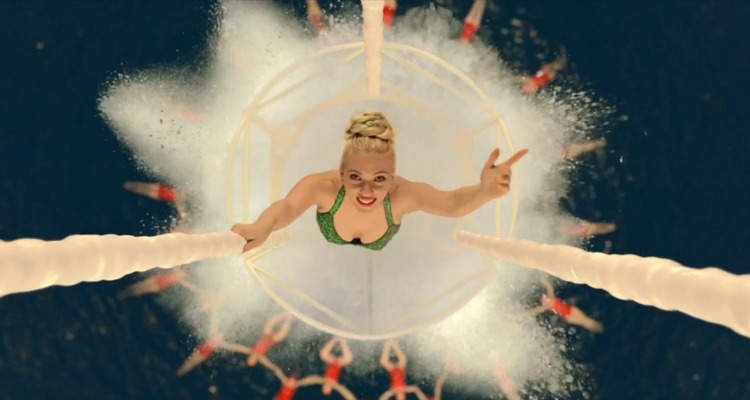 HAIL, CAESAR! (UK | USA/12A/106mins)
Directed by Ethan and Joel Coen. Starring Josh Brolin, George Clooney, Tilda Swinton, Scarlett Johansson, Channing Tatum
THE PLOT: In 1950s Hollywood, Eddie Mannix (Josh Brolin) works as a ‘Fixer’ for Capitol Studios. It’s Mannix’s job to make sure the studio retains its reputation, but between negotiating a portrayal of Jesus in the upcoming ‘Hail Caesar’ with religious heads, making a gentrified star of Western star Hobie Doyle (Alden Ehrenreich) and covering up the pregnancy of DeeAnna Moran (Scarlett Johansson), Mannix is considering a job change. The sudden abduction of Baird Whitlock (George Clooney) – star of “Hail Ceasar” – makes everything more complicated, especially with reporters Thora and Thessaly Thacker (Tilda Swinton) on the hunt for their next big stories.
THE VERDICT: The Coen Brothers turn their eye back to the underbelly of Hollywood – after 1991’s ‘Barton Fink’ – but this time, in trying to tell the story of a man holding a Hollywood studio together, the filmmakers seem to get lost in loving homage to the Golden Age of Hollywood, and forget to tell an actual story.
Josh Brolin does his best with the character of Eddie Mannix, and while he has some hilarious lines, and is the presence that holds the film together, he actually does not have a lot to do, other than move from one scene to the next. George Clooney amps up the absurdity as the kidnapped Baird Whitlock, Scarlett Johansson has fun with a thick-accented, seemingly innocent starlet, Channing Tatum dances up a storm as Burt Gurney and Tilda Swinton plays fast talking, nosy twin reporters. The rest of the cast is littered with familiar names, including Jonah Hill, Frances McDormand, Alison Pill and Alden Ehrenreich. The trouble is that while each of the cast does their best with their roles, they are let down by a meandering and incoherent script.
Written, as per usual, but Joel and Ethan Coen, Hail, Caesar! seems to be more concerned with making sure the details are right in this Hollywood homage, than telling an actual story. Dance sequences and synchronised swimming showstoppers abound – the latter lovingly created in the style of Busby Berkeley – but these literally stop the story from moving forward. With Mannix trying to hold so many plates in the air, and the audience learning virtually nothing about this central character – the entire affair descends into a bitty, beautiful mess.
As directors, the Coens have once again coaxed wonderful performances from their cast – although the casting of Tilda Swinton as twins feels a little stunty; perhaps trying to outdo Wes Anderson for casting her as an elderly lady in ‘The Grand Budapest Hotel’!? – and each gives their best to the role. The trouble is that in trying to pay homage to days gone by, and so many real life people – such as Hedda Hopper, Gene Kelly, EJ Mannix and Esther Williams – that the film needed a tighter edit to make it coherent.
In all, ‘Hail, Caesar!’ looks wonderful, sounds great and has a fantastic cast, but they are let down by a storyline that is muddled, messy and incoherent.
RATING: 2.5/5
Review by Brogen Hayes

TRUTH (USA/15A125mins)
Directed by James Vanderbilt. Starring Cate Blanchett, Robert Redford, Topher Grace, Elisabeth Moss, Bruce Greenwood, Stacy Keach, John Benjamin Hickey, Dermot Mulroney, Dennis Quaid.
THE PLOT: It’s 2004, and Mary Mapes (Blanchett), the acclaimed, award-winning producer of the top American news show “60 Minutes”, stumbles across evidence that suggests that US President George W. Bush – currently running for re-election – may have dodged combat during the Vietnam War by getting drafted into the National Guard.
With the show’s veteran presenter Dan Rather (Redford) quickly onboard, Mapes pulls together an investigative team to try and confirm the reports, finally receiving confirmation from former Texan National Guard lieutenant colonel Bill Burkett (Keach). But there are forces afoot to shoot them down…
THE VERDICT: Hot on the heels of the Oscar-winning ‘Spotligh’t comes another true-life drama of a newsroom daring to turn whistle-blower on an American institution. Based on Mary Mape’s 2005 memoir, this time, it’s not the Catholic Church and their fondness for children but the even more biblical Bush dynasty. That the shocking revelations don’t quite go David’s way this time will prove something of a rug-puller for those unfamiliar with the original 2004 scandal, and ‘Truth’ certainly leaves an odd after-taste.
Nonetheless, it’s all done in the best possible taste, with heavyweights Blanchett and Redford doing what heavyweights Blanchett and Redford do. The casting of the latter is almost cheeky, given his leading role in 1976’s Nixon-nixing ‘All The President’s Men’. That ‘Truth’ – which debuted in Toronto in September – hasn’t really garnered any awards heat reflects its ultimate lack of a kill. And director Vanderbilt’s killer instinct.
RATING: 3/5
Review by Paul Byrne

HITCHCOCK/TRUFFAUT (France | USA/TBC/79mins)
Directed by Kent Jones. Starring Alfred Hitchcock, Francois Truffaut, Martin Scorsese, David Fincher, Wes Anderson, Richard Linklater.
THE PLOT: In 1966, film director and former critic François Truffaut published the book “Cinema According to Hitchcock”. Fifty years later, filmmakers including David Fincher, Wes Anderson and Richard Linklater discuss how the book and Hitchcock’s work influenced their careers, while director Kent Jones examines just how the conversations between the filmmakers took place.
THE VERDICT: ‘Hitchcock/Truffaut’ is an engaging and fascinating documentary; to have such established and different filmmakers come together to talk about the career of Alfred Hitchcock is engaging enough, but to have this paired with the audio footage of the now famous interviews with François Truffaut makes for a cinematic treat.
At the time when Truffaut interviewed Hitchcock, he set out to remind audiences that the filmmaker was much more than a light entertainer, as he had come to be considered. Now, conversely, Hitchcock is regarded as a master filmmaker, but is perhaps not in the public consciousness as he could be. This is why ‘Hitchcock/Truffaut’ feels fresh and new, even as it takes a look back at films of the past.
Throughout the film, filmmakers including Martin Scorsese, James Grey, Peter Bogdanovich, Olivier Assayas, Kiyoshi Kurosawa, Wes Anderson and Richard Linklater discuss the films of Hitchcock, through the lens of Truffaut’s interviews and books. These discussions are then interspersed with footage from Hitchcock’s film, along with clips from the interviews with Truffaut. One thing becomes clear very quickly; these filmmakers had their opinions of Hitchcock changed – one way or another – on reading Truffaut’s works. In keeping the list of interviewees comparatively short, director Kent Jones keeps the audience engaged with the discussions, while choosing respected filmmakers in their own right lends weight to the discussions on screen.
Kent Jones paces’ Hitchcock/Truffaut’ well, and never allows discussions of certain scenes or ideas in Hitchcock’s work to become drawn out or too involved. This gives the film a light feel and this, coupled with the respect the interviewees obviously have for Hitchcock, makes the film feel engaging and light, and stands to remind audiences just why Hitchcock was so successful and revered. As well as this, the film allows Hitchcock to speak for himself, giving an insight into the mind that made films including ‘Vertigo’, ‘The Birds’ and ‘Psycho’.
In all, ‘Hitchcock/Truffaut’ is for old fans and new ones alike; this is a fascinating documentary about one of the great filmmakers of all time, whose work is dissected and revered in by filmmakers still working today. The film is light and engaging, and reminds audiences of the power of Alfred Hitchcock’s work.
RATING: 4/5
Review by Brogen Hayes