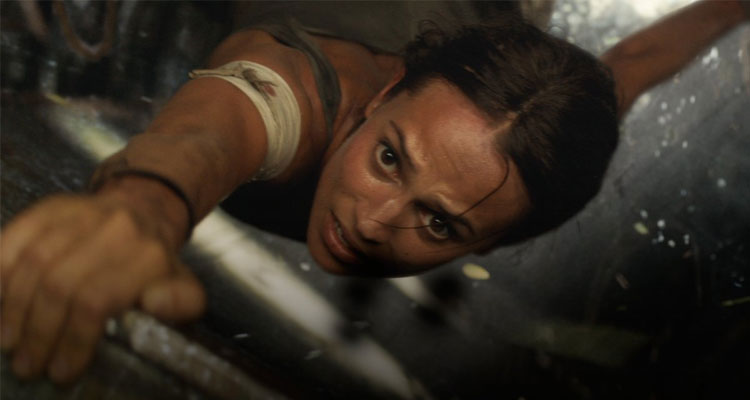 TOMB RAIDER (UK | USA/12A/112mins)
Directed by Roar Uthaug. Starring Alicia Vikander, Walton Goggins, Dominic West, Kristen Scott-Thomas, Derek Jacobi.
THE PLOT: Seven years after her father goes missing seeking a mythical tomb, Lara Croft (Alicia Vikander) finds a clue to his whereabouts, and goes searching for him. When she arrives on the island where her father was last seen, however, Lara discovers that she is not the only one seeking answers, and so begins a race against time to save her father, and the world.
THE VERDICT: It has been 15 years since movie fans last saw Lara Croft on the big screen. Played by Angelina Jolie, the early 00s version of Lara Croft was less than successful, but with the games still being played by millions, it is not surprising that Ms Croft has been brought back to the movies, this time played by Oscar winner Alicia Vikander. The trouble with the first franchise was a general lacklustre feel, and although the adventure has been ramped up for this new outing, there is a definite lack of fun to be had with the film.
As mentioned, Alicia Vikander takes on the role of Lara Croft, and although there is little doubt that she is a great actress, it is tough to say that Vikander is enjoying herself here. It is hard to shake the idea tthat Vikander took the role of Lara Croft to gain some distance between herself and the more serious roles she is known for, but this does not mean that she is right for the role. Vikander runs, fights and quips with the best of them, but there is a twinkle in her eye that is missing, as well as the feeling that she is enjoying herself. The rest of the cast features Dominic West as Lara’s father, Walton Goggins as villain Mathias Vogel, Daniel Wu, Kristen Scott-Thomas, Derek Jacobi and Nick Frost. Goggins and Scott-Thomas are sorely underused in their roles, and although Nick Frost brings the humour, it is too much to expect him to carry it through a film that is not in, for the most part.
The screenplay, written by Geneva Robertson-Dworet and Alastair Siddons makes sure that is borrows liberally from the feel of ‘Indiana Jones’, but too much time is spent establishing the worlds that Croft lives in, then finds herself in for the film to feel like it is a lot of fun. As well as this, conflicts are resolved too easily, character actions are not always believable, and for a character that has lasted for over 22 years in various media, Lara Croft feels bland and far less entertaining and relatable than she should.
Norwegian director Roar Uthaug does his best to make ‘Tomb Raider’ a fast paced and exciting film, but too much time is spent getting bogged down in details. When the actual tomb raiding finally does happen it is definitely the most entertaining and exciting part of the film, but the mystical and adventurous feel soon gives way to the same old conflicts, just in a place that has been lost for a very long time.
In all, ‘Tomb Raider’ is nowhere near as much fun as it should be. Alicia Vikander does her best, but feels miscast in the film, while Walton Goggins and Kristen Scott-Thomas are sorely underused. Without the campy tongue in cheek feel of ‘Indiana Jones’, the high stakes action of ‘Mad Max: Fury Road’ or the fleshed out, relatable characters of ‘Wonder Woman’, ‘Tomb Raider’ feels like a pale imitation of all three, without ever reaching greatness on its own.
RATING: 2/5
Review by Brogen Hayes

PETER RABBIT (UK / Australia / USA / G / 94 mins)
Directed by Will Gluck. Starring James Corden, Domhnall Gleeson, Rose Byrne, Margot Robbie, Daisy Ridley, Sam Neill.
THE PLOT: Peter Rabbit (James Corden) is an adventurous, free-spirited rabbit that lives in an idyllic countryside setting with his siblings including Flopsy (Margot Robbie) and Mopsy (Daisy Ridley). They’re watched over by kindly artist Bea (Rose Byrne). They regularly ‘liberate’ vegetables from Old Mr McGregor’s (Sam Neill) garden, as in a sense it’s rightfully theirs. When the cranky old farmer dies of natural causes, his nephew Thomas (Domhnall Gleeson) comes to take over his farm. Thomas is a city boy looking for relaxation after having a very public meltdown in his toystore job in London. He’s not going to get much relaxation, as it’s soon hate at first sight between Peter and Thomas, followed by a declaration of war…
THE VERDICT: Look away, Beatrix Potter purists. The 2018 take on ‘Peter Rabbit’ is a fully modernised take on her much-loved, rebellious and rascally rabbit. Dusting off Potter’s best-selling 1902 children’s book, Director Will Gluck and co-screenwriter Rob Lieber have given the character a modern CGI-animated sheen. This isn’t a twee children’s animation that you might see on TV on a Bank Holiday morning (hinted at in the opening scene). It has more in common with ‘Tom & Jerry’ and ‘Bugs Bunny’ than Potter, but surprisingly it actually works.
Blending live action footage shot in Australia and the UK with some fluidly-realised CGI rabbits and other animals, the film has a playful, anarchic spirit from the get-go. Expertly-voiced by Corden, he’s a character that is thankfully bearable. When Thomas arrives, the film really takes off though as the new farmer and the rabbit try to outwit each other with electrified fences, explosives and all manner of booby-traps. Gleeson literally throws himself into the role with gusto, channelling that General Hux sneer to good effect. He becomes both a human pincushion and a pinball, bounced about the house with seemingly no harm done. This being a family film, it’s all done in the best possible taste.
Well, almost. This reviewer could have done without overly modern touches like the rapping birds or the animal house party. A little more subtlety in Gluck’s direction wouldn’t have gone amiss either. The human performances are pitched a little too high, as if everyone was aware they were in a live action cartoon of sorts and need to over-emphasise things. Maybe the actors were all jacked up on sugary treats at the craft service table in between shots. That said though, if you go along with it then there’s a lot of fun to had in Peter Rabbit. It’s funnier than it looks and has a sweet centre which is hard to resist. At a tight 94 minutes, it doesn’t outstay its welcome either. ‘Peter Rabbit’ is a funny bunny, rather than a bunny boiler.
RATING: 3 / 5
Review by Gareth O’Connor

UNLESS (Canda / Ireland / 15A / 90 mins)
Directed by Alan Gilsenan. Starring Catherine Keener, Matt Craven, Hannah Gross, Chloe Rose, Abigail Winter.
THE PLOT: Writer and translator Reta (Catherine Keener) has reached a point in her life where she’s content. In a long-term relationship with Tom (Matt Craven), she also has three daughters – Norah (Hannah Gross), Christine (Chloe Rose) and Natalie (Abigail Winter). This peaceful family life is shattered when she discovers that her eldest, Norah, has left her boyfriend and apparently also her family to live on a Toronto street corner. Refusing to communicate with anyone, all she has to offer is a single word – goodness – that is written on a piece of cardboard. As time passes, Norah comes to terms with just what is happening and how it will affect this seemingly happy family…
THE VERDICT: Having worked on television documentaries in recent years, Irish director Alan Gilsenan returns to narrative fiction for the first time since 2004 with ‘Unless’. This Canadian-Irish co-production is a low-key, observational drama about the potential disintegration of a family unit. Adapted by Gilsenan from Carol Shield’s novel, it takes a long, hard look at how parents can fail their (adult) children and vice versa.
When a young woman with her whole life ahead of her abandons everything she knows for no apparent reason to live rough on the streets and in a women’s shelter, her family is incredulous. Is it a quarter-life crisis? Is she mentally ill? Is there some deeper purpose at her silent protest and request for people to engage with this concept known as goodness? The answer only really comes in the last few minutes. It goes some way to explain the events that have unfolded, but not in a fully satisfying manner.
While there’s an earnestness and sensitivity to what happened, it’s only done so in a fleeting manner. A bit more exposition here would have helped, just to get into Norah’s fragile mindset. That said though, there’s an affecting quality to the film thanks to the ever-excellent Keener and the pale, emotive Gross. With Norah being an adult, Reta can’t force her off the streets, so it becomes a story of gradual acceptance rather than rejection. Gilsenan packs some big themes into a short running time – about family, humanity and faith while keeping his characters in check. While it doesn’t fully live up to its ambitions, ‘Unless’ is still an interesting and resonant film.
RATING: 3 / 5
Review by Gareth O’Connor