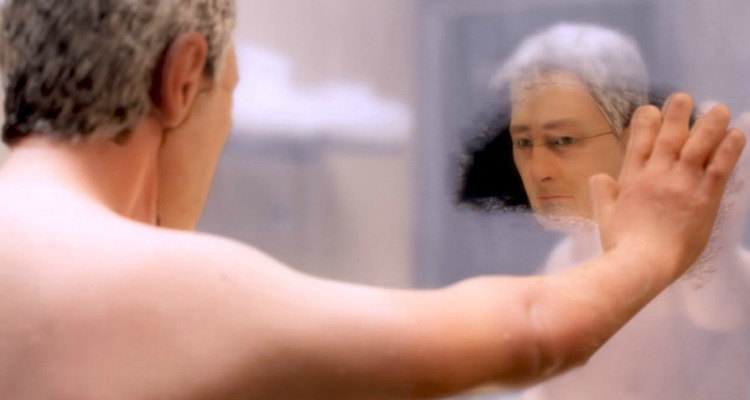 ANOMALISA (USA/15A/90mins)
Directed by Charlie Kaufman and Duke Johnson. Starring David Thewlis, Jennifer Jason Leigh, Tom Noonan.
THE PLOT: Michael Stone (David Thewlis) reutrns to Cincinatti to give a conference on customer service. While there, he dredges up old memories from the past, and thinks he finds kinship in Lisa (Jennifer Jason Leigh). The trouble is that Michael sees no differences between the people in his life, and it is not long before Lisa begins to blend into the background.
THE VERDICT: Funded through Kickstarter, ‘Anomalisa’ first began life as a 40 minute short film before being expanded into a feature length story. ‘Anomalisa’ is based on a play written by Charlie Kaufmann – under the pen name Francis Fregoli – and examines issues surrounding mental health, and the problems that we cause for ourselves.
‘Anomalisa’ is entirely stop motion animated, and this lends an air of unreality to the story, one without which the film would possibly not have worked as well. David Thewlis, Jennifer Jason Leigh and Tom Noonan – who voices every other character in the film but Michael and Lisa – are fantastic in bringing these characters to life, and making them feel rounded and whole. The voices lend depth to the emotion on screen, and Tom Noonan’s performance as “Everybody Else” is similar enough to underline the issues that Michael is facing, but different enough to make sure the audience doesn’t laugh at this device.
‘Anomalisa’ is the first film to be written by Charlie Kaufmann since 2008’s ‘Synecdoche, New York’. Kaufmann makes sure that the dialogue in the film feels natural and warm, while setting the film in the sterile and unsettling location of a hotel makes the story that little bit more surreal. The idea that Michael is suffering from mental health issues is brought to the screen through the puppets all having the same face and voice, but the audience is left to make their own assumptions about the character, and just how he found himself in this situation. There is no big realisation at the end of the film; Michael simply returns to the life that stifles him and makes him miserable, without actually dealing with any of the issues he is facing… As so many do.
Directors Duke Johnson and Charlie Kaufman allow the audience to forget that we are watching an animated film, by making the performances so believable, the setting so realistic and the mystery surrounding Michael utterly intriguing. The film appears to be set in the late 1990s or early 2000s, as mobile phones and the technology we so heavily rely on now is notably absent, which gives the film a feeling of familiar warmth, without feeling jaded or overdone.
The sets created for ‘Anomalisa’ are beautifully realised in painstaking detail, making the world of the film feel much bigger than the hotel, like there is an entire world outside the shot on screen, waiting to be explored.
In all, ‘Anomalisa’ is a stunningly beautiful film, realised in exquisite detail. The story is an examination of the disappointments in life, with a layer of paranoid delusion laid over the top. There is little in the film that answers the questions raised, but this is why it works as it does not preoccupy itself with exposition and explanation focusing instead on telling a truly engaging story. David Thewlis, Jennifer Jason Leigh and Tom Noonan bring the world to life with their voice work, and although the film does not try to tie itself up in a happy ending, there is no doubt that ‘Anomalisa’ is a special, beautiful and engaging anomaly.
RATING: 5/5
Review by Brogen Hayes

TRADERS (Ireland/16/90mins)
Directed by Rachael Moriarty, Peter Murphy. Starring Killian Scott, John Bradley, Peter O’Meara, Nika McGuigan, Barry Keoghan, Tom Davis, Olwen Fouere, Laurence Kinlan, David McSavage.
THE PLOT: Having recently been let go from their high-paying jobs, three ex-co-workers quickly become two after a swift econicide drive straight into a tree, laving Harry Fox (Scott) and Vernon Stynes (Bradley) more than a little shaken. And desperate.
For numbers whizz Vernon, one of his new money-making schemes piques the increasingly desperate Harry’s ear – an online site, Traders, where you anonymously stake money for a low-budget gladiator battle in a remote spot. Once you’ve both dug the grave first, of course.
THE VERDICT: A movie that’s so very nearly brilliant, ‘Traders’ is one of those rather cool high-concept outings that give the likes of Quentin Tarantino a major hard-on.
Only trouble is, this hard-on doesn’t quite sustain its 90-minute duration, with the odd clang of untruth gradually drowning out that early solid groove.
Not that you can fault the cast, Scott playing to his Paddy Wahlberg strengths, and ‘Game Of Thrones’’ John Bradley (you’ll know him as Samwell Tarly) utilising his trademark pubescent Oliver Hardy sensitivity. It’s just that, the rush of ‘Fight Club’ or ‘Battle Royale’ is absent, and Moriarty and Murphy (who have worked together for 20 years) don’t quite have the chops to go all Haneke on our heads either.
What you’re left with is an intriguing, well-crafted Kafkaesque fable that satisfies without ever delivering that crucial killer punch.
RATING: 3/5
Review by Paul Byrne

THE DIVERGENT SERIES: ALLEGIANT (USA/12A/121mins)
Directed by Robert Schwentke. Starring Shailene Woodley, Theo James, Jeff Daniels, Naomi Watts, Miles Teller.
THE PLOT: After the death of Jeanine (Kate Winslet), Evelyn (Naomi Watts) puts those loyal to her on trial, while ordering that all gates through the wall to the rest of the world stay closed. Of course, Tris (Shailene Woodley) and her friends are not going to stand for this so after freeing Tris’ brother Caleb (Ansel Elgort) they set out to find out just what is happening outside the city they now know is Chicago. What they find is not quite what they expected, and it soon becomes clear that the leader of this new world David (Jeff Daniels) has more in mind than saving the residents of Chicago from themselves.
THE VERDICT: As with most film series aimed at teens and based on books, Veronica Roth’s final instalment in the ‘Divergent’ series – ‘Allegiant’ – has been split into two films. This first film shares a title with the book – with the final film being titled ‘Ascendant’ – but like most single story books split into two films, ‘Allegiant’ struggles with having too much exposition and not enough doing.
Shailene Woodley, Zoe Kravitz, Naomi Watts, Theo James, Miles Teller and Ansel Elgort all return to the roles they have played throughout the series, and while they do not bring much new to the film, they give solid performances throughout. Jeff Daniels is the major newcomer to the series with the role of David, and although he is an imposing presence, he is never truly given the chance to be menacing or truly intimidating.
From what we see in ‘Allegiant’, it seems that Noah Oppenheim, Adam Cooper and Bill Collage’s screenplay is vastly different to the story told in Veronica Roth’s novel, although the bones of the story remain the same. The screenplay is rather uninspired in terms of dialogue, and gets tangled up in itself toward the end of the second act, but it is just enough to keep the story moving and the audience engaged, while leaving enough unanswered questions that the final film will be able to pick up.
Director Robert Schwentke keeps the fun and the curiosity going through most of the film, but it is when adults come together to bicker politics that the film becomes too caught up in minutiae and begins to slow down. The pacing of the first and final acts of the film is strong, and it is in the fast paced action sequences that ‘Allegiant’ thrives, but the interpersonal relationships with the threat of a new war on the horizon drags the film down.
In all, ‘Allegiant’ is a film concerned with setting up the one that comes after it. The cast do fine and the action sequences are fun, but the politics and rhetoric often overwhelm the fun to be had in the film, dragging it to a crawl. ‘Ascendant’ is sure to be action packed and thrilling, but ‘Allegiant’ is a step down from the fun and engaging films the ‘Divergent’ series has offered so far.
RATING: 3/5
Review by Brogen Hayes

KUNG FU PANDA 3 (USA/China/PG/95mins)
Directed by Alessandro Carloni, Jennifer Yuh. Starring the voices of Jack Black, Dustin Hoffman, Bryan Cranston, Angelina Jolie, J.K. Simmons, Jackie Chan, Seth Rogen, Lucy Liu, David Cross, Kate Hudson, James Hong.
THE PLOT: Facing the task of picking up where his old master (Hoffman) left off, Po (Black) must teach his motley crew of kung fu cats – Jolie’s Tigress, Chan’s Monkey, Rogen’s Mantis, Cross’ Crane and Liu’s Viper – the fine art of kicking the crap out of people whilst remaining calm and centred inside. If that weren’t enough for Po to be getting on with, his estranged father, Li (Cranston), suddenly turns up. Only trouble is, Po has an adopted father, Mr Ping (Hong), and, naturally, his beak is bent out of shape.
Oh, and then then the real baddie, Kai (Simmons), shows up. Just to throw some kung fu crazy into the family soap opera…
THE VERDICT: One of those rare beasts, being a sequel to a sequel, and a DreamWorks Animation franchise to boot, but actually rockin’, ‘Kung Fu Panda 3’ is surprisingly good.
Surprisingly because an overweight panda who does martial arts is a one-joke concept, and yet, thanks to one smart script, and a cast largely made up of highly grateful former box-office champs, this is one fun movie.
And it looks great too.
Not that everyone here should give us anything less than damn good, Yu and Carloni having been involved in the franchise from the very start. This is no ‘Ice Age’ flog though, and ‘Kung Fu Panda 3’ is no slog to watch either, the jokes coming just as fast as the tidy, top-of-the-range animation.
Or maybe I’m just getting soft in my old age…?
RATING: 4/5
Review by Paul Byrne

THE WITCH (USA/UK/Canada/Brazil/15A/92mins)
Directed by Robert Eggers. Starring Anya Taylor-Joy, Ralph Ineson, Katie Dickie, Harvey Scrimshaw, Ellie Grainger, Lucas Dawson, Bathsheba Garnett.
THE PLOT: It’s the mid-17th century (or thereabouts), New England, and a family of seven have been excorcised from their Puritan church and community after a little religious difference of opinion. Deciding to go it alone out on a farm deep in the wild, the man of the house (Ineson) is far better belting out the scripture than he is harvesting the land. And given that he and his stern wife (Dickie) have four kids, and a new baby, living off the fat of the land is somewhat crucial.
Not that food is the family’s main concern when that newborn suddenly vanishes…
THE VERDICT: Once you get over the fact that everyone sounds like Andy Kershaw here, there’s something beautiful beating at the heart of Robert Eggers arty horror flick.
Only trouble is, there isn’t much in the way of scares.
Being far more Paul Thomas Anderson than Roger William Corman in his approach, Eggers – making his debut here – is meticulous in his re-creation of a Puritan New England. And it would be hard to fault ‘The Witch’ for that attention to authentic detail, but Eggers’ film becomes more like an exercise in history than horror as this ostensibly arthouse offering unfolds.
Not that the cast don’t give it their all here, with Anya Taylor-Joy being particularly notable, whilst you’re constantly aware of the fact that Eggers has done his homework here. Production designer on a plethora of shorts and Jay Stern’s 2013 feature Spirit Cabinet, Eggers shows all the signs of being a serious filmmaker here.
Let’s just hope that next time out, he has a little fun too.
RATING: 2/5
Review by Paul Byrne