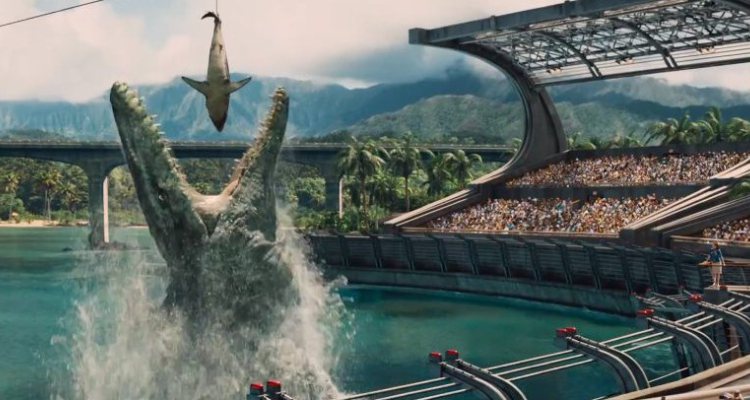 JURASSIC WORLD (USA/12A/124mins)
Directed by Colin Trevorrow. Starring Chris Pratt, Bryce Dallas Howard, BD Wong, Ty Simpkins, Nick Robinson, Vincent D’Onofrio.
THE PLOT: 20 years after the disastrous events of JURASSIC PARK, the park is finally open to the public, but the public are growing weary – ‘No-one’s impressed by a dinosaur any more’ complains park operations manager Claire (Bryce Dallas Howard). To rejuvenate interest in the park, the team have genetically engineered a dinosaur to be bigger louder and with more teeth, but the team soon learn that they have created an intelligent killing machine bent on staying at the top of the food chain.
THE VERDICT: Blockbuster season is on us again; with Mad Max: Fury Road barely in our rear view mirror, JURASSIC WORLD roars into cinemas this week, bringing with it a healthy dollop of nostalgia, some new thrills and a bigger, scarier monster.
Bryce Dallas Howard leads the show as Claire, a control freak who sees the park an enterprise, seemingly forgetting that the creatures on Isla Neblar are living, breathing animals. Much like Richard Hammond – RIP – she wears white throughout the film, her wardrobe dishevelling as she becomes more and more of a bad ass. Chris Pratt plays Owen; a former Marine who was brought into try and train the Raptors. Pratt is as wild as Howard is tame and, for the first half of the film, behaves like a typical misogynist. Thankfully this mellows as the film goes on. The kids in peril – there always have to be kids in peril – are played by Ty Simpkins and Nick Robinson, Vincent D’Onofrio turns up as a character rather similar to the ill-fated Nedry and BD Wong returns as Dr Wu.
The story, written by Rick Jaffa, Amanda Silver, Derek Connolly and Colin Trevorrow, is really remarkably similar to that of Jurassic Park, only this time the park is open. The dialogue, sad to say, is filled with exposition and is rather clunky, but there are plenty of callbacks to the original for the fans in the audience, but even these become too much after a while. The relationship between Howard and Pratt’s characters is troubling to begin with – misogyny flies across the screen whenever they are together – but as the peril becomes more perilous, this evens out, with Howard getting her moment of glory in the end. Why she kept her heels on for the entire film is beyond explanation though. As well as this, there often feels like there is a little too much going on in Jurassic World, with the threads of story not always fitting together well, too much set up and exposition and a rather silly subplot turning up every now and again. That said, there are plenty of giggles to be had, and a couple of conventions get, if not quite turned on their head, then gently angled in a different direction.
It’s hard to imagine how director Colin Trevorrow made the journey from SAFETY NOT GUARANTEED to JURASSIC WORLD, and although he manages his job competently for the most part, there is very little evidence on screen that the film was not directed by Speilbergbot 3000 or similar. The dinosaurs suffer slightly through the overuse of CGI – one of the things that made the original film feel tangible and real was the use of animatronics – and as per usual, the 3D does little for the film as a whole.
In all, JURASSIC WORLD struggles under the weight of expectation from the original film, but there is plenty of fun to be had with the film. The dinosaurs are bigger and cooler, there are enough – although sometimes too many – callbacks to the original to make the film feel like part of the Jurassic Park universe and the final set piece is as big, silly and nostalgic as you could hope.
RATING: 3.5/5
Review by Brogen Hayes

LET US PREY (UK/Ireland/18/92mins)
Directed by Brian O’Malley. Starring Liam Cunningham, Pollyanna McIntosh, Bryan Larkin, Hanna Stanbridge, Douglas Russell, Niall Greig Fulton, Jonathan Watson.
THE PLOT: It’s a gloomy night in deepest, darkest Scotland, and a hard rain is plainly about to fall. That it should fall on a smalltown cop shop makes for a convenient gathering of sinners and suckers, the arrival of a mysterious stranger (Cunningham, in full Man In Black mode) sparking off flashbacks for everyone there to their darkest hour. No one, not even the doctor called in to look after a convulsing prisoner, is safe, as each of their pasts comes back to not only haunt them but to cleverly finish each one of them off. The only soul that seems safe is new cop on the beat Rachel (McIntosh), and she soon finds herself having to go full Ripley to survive this night of fire and brimstone…
THE VERDICT: Bejiggers and bejapers, we Irish are getting awful good with our scary movies and super creeps. Must be something to do with the recession. Our inner demons are bursting out, LET US PREY following hot on the bloodied heels of Ivan Kavanagh’s recent offering, THE CANAL. The fact that there’s a generation of young Irish filmmakers more than happy to embrace genre filmmaking shows just how far we’ve come. There’s no need to struggle with our national identity, our troubled history, or the dark arts of growing up in a strict Catholic smalltown. The black magic on offer here is universal, and all the more enjoyable for it.
Cunningham – a long-time collaborator with director Brian O’Malley – must have had a lot of fun doing so very, very little here (thus making his slow-moving shark all the scarier), whilst McIntosh – she with the child-bearing lips and unfortunate CV entries, such as LAND OF THE LOST, BURKE AND HARE and FILTH – does a fine job channelling Sigourney Weaver’s most famous character.
A slow, tantalising assault on the senses, Let Us Prey might slip into B-movie territory every now and then, but a little B-movie every now and then is good for the soul.
RATING: 4/5
Review by Paul Byrne

QUEEN AND COUNTRY (Ireland/France/Romania/15A/114mins)
Directed by John Boorman. Starring Callum Turner, Caleb Landry Jones, Pat Shortt, David Thwelis, Richard E. Grant, Vanessa Kirby, Brian F. O’Byrne, Sinead Cusack, Tamsin Egerton, Aime-Ffion Edwards.
THE PLOT: As the 9-year-old Bill Rohan cheers Adolf Hitler for blowing a hole in the side of his school, his face morphs into the 18-year-old Bill Rohan (Turner), called up for national service and sent to a training camp in Aldershot. It’s here he meets his conniving mentor, Private Redmond (a well-cast Pat Shortt), who informs him that everyone in the army “is trying to get away with something”. And so, along with his buddy Percy (Jones), the Carry On begins, countered with a little mysterious love intrigue from Bill, as he chases the elusive and mysterious ‘Ophelia’…
THE VERDICT: It’s been 30 years since honorary Irishman John Boorman (Surrey-born but Wicklow-based for decades) last visited his early years, 1987’s HOPE AND GLORY having charted the adventures of his 9-year-old self riding the topsy-turvy waves of World War 2. In QUEEN AND COUNTRY, we jump forward ten years, for a teenager’s experiences after he’s called up for National Service. Tellingly, those experiences are as much about women as they are about war. The signs are all there for the life ahead – living in the shadow of Shepperton Studios, the unfaithful mum, the anti-authority – and Boorman is clearly playing from the heart here.
If the end result is neither Terence Davies serene nor Mike Leigh misanthropic, being far too episodic for either, QUEEN AND COUNTRY does try to reflect another pivotal time in history, with Boorman’s remarkable later life clearly showing its roots here.
RATING: 3/5
Review by Paul Byrne

THE LOOK OF SILENCE (Denmark | Finland | Indonesia | Norway | UK/TBC/103mins)
Directed by Joshua Oppenheimer.
THE PLOT: Joshua Oppenheimer follows up his award winning film THE ACT OF KILLING with another uncomfortable look at Indonesia, post the genocide of 1965 which saw between 1 – 3 million people slaughtered for allegedly being communists. The Look of Silence follows an optometrist named Adi as he meets those responsible for the killings, during which his older brother died, and tries to ascertain the truth, while asking the men to accept responsibility for what they did.
THE VERDICT: In THE ACT OF KILLING, Oppenheimer confronted those responsible for the killings himself, asking them to tell him about the experiences and allowing the enormity and horror of their actions to dawn on them as the film was being made. This time, Oppenheimer accompanies Adi as he openly and fearlessly confronts the men responsible for his brother’s death.
Adi and Oppenhenimer are brave in their decision to approach an ongoing situation in such a manner, and the subjects of the documentary – the heads of the death squads and their families – are obviously uncomfortable about their actions. At first, they brag; cutting off a woman’s breast, taking a dismembered head into a café and drinking the blood of the slain so they did not go mad seem to be things that these men are proud of, but as Adi presses deeper, he is almost always shut down as it becomes clear that he is not making a film celebrating the murders, but questioning them. Oppenheimer allows the camera to linger on the faces of the killers, often pushing the boundary of comfort as they demand the camera be shut off.
As well as this, Oppenheimer studies Adi’s family; his brother was killed before Adi was born, but even now, almost 50 years after her son’s death, Adi’s mother still mourns his death. It is clear that the emotions of this woman – who muses that she must be about 100 years old – are incredibly close to the surface and, even as she states it is God’s place to punish the wicked, it is clear that the lack of closure, and the fact that her son’s killers roam free have not allowed her to grieve properly, and she is almost stuck in the past, at the moment of her son’s death.
Oppenheimer’s film blends the stories of the killers and the victims’ families together, but the message that comes from both sides is often the same; the past is past. This shows that Indonesia has never been given the chance to heal and, combined with interviews with the killers who brag about their gory work, it shows that the country has not yet accepted that the deaths of millions of people was not only unnecessary and unwarranted, but it has wounded the country in a way that it has not yet started to heal from.
In all, THE LOOK OF SILENCE is an intensely powerful but profoundly uncomfortable film to watch. Oppenheimer and Adi’s actions are brave and honest, and the film shines a light onto issues that have not yet been acknowledged, much less resolved.
RATING: 4/5
Review by Brogen Hayes