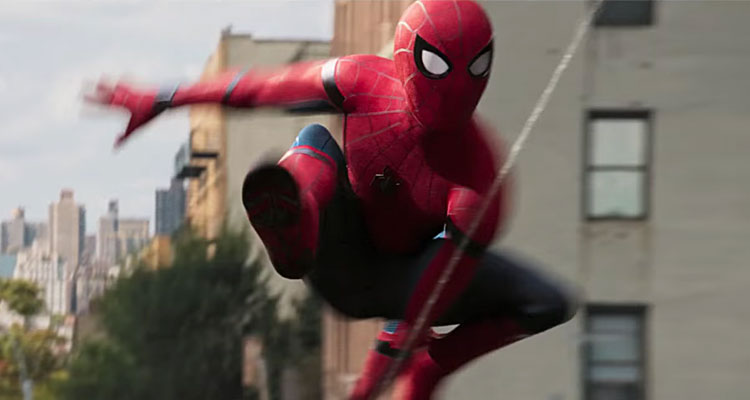 SPIDER-MAN: HOMECOMING (USA/12A/133mins)
Directed by Jon Watts. Starring Tom Holland, Marisa Tomei, Robert Downey Jr., Michael Keaton, Zendaya.
THE PLOT: Just after the events of ‘Captain America: Civil War’, Peter Parker (Tom Holland) finds himself at a loose end. Parker believed he would be called up to join missions with the Avengers, but when this does not happen, he finds himself chasing down an illegal arms trader who seems to be selling weapons made from Chitauri technology. Of course, since Parker is just 15, things don’t always go according to his plan and turning his back on mentor Tony Stark (Robert Downey Jr), puts Parker even more directly in the path of the villain known as Vulture (Michael Keaton).
THE VERDICT: This new incarnation of the web-slinging superhero – this time out, played by Tom Holland – is the third version of the character to grace the big screen in the past 15 years, after Tobey Maguire and Andrew Garfield had their turns. The good news is that ‘Spider-Man: Homecoming’ is not the superhero origins story we have already seen twice on screen in 10 years, but a new tale about the rookie superhero that is lighthearted, but somehow manages to be not quite as much fun as the big screen Spideys that have gone before.
Tom Holland leads the cast as Peter Parker/Spider-Man, and makes the character less of an outcast than we have seen before, while also making Parker charming, witty and plucky, even if he does not always think his plans all the way through. Michael Keaton takes on the role of Adrian Toomes / Vulture and obviously has a lot of fun playing the bad guy; hamming it up at every opportunity. Also in the cast are Robert Downey Jr as Tony Stark – mentor to the young Parker – Jon Favreau as Happy Hogan, Marisa Tomei, Zendaya, Tony Revolori and Donald Glover, whose presence appears to be a nod to the fan-fuelled rumours that he was to take over the role in 2012.
Jonathan Goldstein, John Francis Daley, Jon Watts, Christopher Ford, Chris McKenna and Erik Sommers screenplay does, at times, feel as though there were a lot of hands holding pens during the writing of the film, and although there is fun to be had with the film, there are times when ‘Spider-Man: Homecoming’ does feel rather laboured and drawn out. On the other hand, it is great to see a Spider-Man story on the big screen that does not feel familiar, that plays with the morality of being a hero and the difficulty of being a kid with super powers in a world that has already accepted the adult crime fighters. There are surprisingly few laughs throughout ‘Spider-Man: Homecoming’ – with what few there are to be had coming from Michael Keaton – and although the web slinging scenes are fun, the fight scenes go on just that little too long.
As director Jon Watts tries his best to create a balance with the rookie superhero and the adventure sequences in the film, and there are times when he succeeds at this. There are others, however, when the pacing of the film struggles and all the web sliging in the world doesn’t seem to be able to kick start it again. As well as this, the final sequence in the film is rather less than climactic, although Spider-Man’s morals come into play again when he is faced with a tough choice, and this is an interesting turn for the character. The cast work well together, particularly Holland, Keaton and Jacob Batalon, who plays Parker’s school friend Ned, but at this point, the shine has well and truly gone off Spider-Man as an on-screen presence, and it would perhaps have been wiser to allow him to be a supporting character in the Avengers films for a while, before giving him his marquee status again.
In all, there is fun to be had with ‘Spider-Man: Homecoming’, and audiences can breathe a sigh of relief that this is not another Spidey origins tale, but there is some of the magic missing when it comes to this big screen outing of your friendly neighbourhood Spider-Man that not even Michael Keaton hamming it up can replace.
RATING: 3.5/5
Review by Brogen Hayes

SANCTUARY (Ireland/15A/86mins)
Directed by Len Collin. Starring Amy-Joyce Hastins, Tara Breathnach, Christopher Dunne, Kieran Coppinger and Charlene Kelly
THE PLOT: Larry (Kieran Coppinger) and Sophie (Charlene Kelly), two young people with intellectual disabilities, slip away from a group outing to the cinema and, with the help of their carer Tom (Robert Doherty), spend the afternoon together in a Galway hotel. Little do the two young lovebirds know that everyone outside the walls of their sanctuary is looking for them.
THE VERDICT: Based on a play by the Galway-based Blue Teapot Theatre Company, and adapted from one of the Company’s plays, ‘Sanctuary’ is not only sweet and funny, but it touches on issues faced by some of the most invisible people in Irish society today.
The cast do a great job with their roles, although it is probably fair to say that these are not the strongest actors ever seen on screen, there is a warmth to the characters and a genuine believability to their performances. The cast features Stephen Marcus, Amy-Joyce Hastins, Tara Breathnach, Christopher Dunne, Kieran Coppinger and Charlene Kelly.
Screenwriter Christian O’Reilly adapted the screenplay from his own stage play, and allows the cast to develop their characters on screen, and it is clear that the stories we see, the vignettes and little moments, are gleaned from their own experiences. There are many touching moments, some laugh out loud funny ones and, as the film goes on, some darker moments that not only give context to why these two young lovebirds cannot be alone together, but the way they are viewed – or ignored – by the world that they live in.
As director, Len Collin allows the film to take on the feel of a caper, and obviously has fun in allowing the actors to interact with one another on screen. There are times when the timeline of the film feels a little garbled, which leads to the running time feeling rather drawn out, but there are some genuinely touching, funny and moving moments throughout the film.
In all, ‘Sanctuary’ is a lovely, ambitious project that is full of charm and a good story that actually discusses issues, albeit slightly superficially. There is plenty to commend ‘Sanctuary’ however, not least the fact that it brings people who are so often overlooked in society to the front and centre of the film.
RATING: 4/5
Review by Brogen Hayes