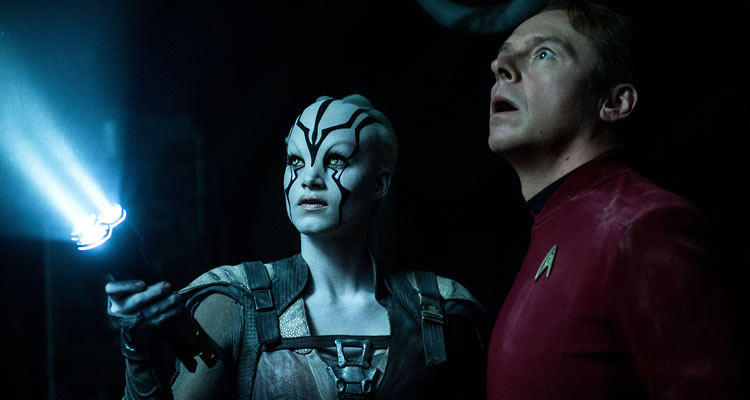 STAR TREK BEYOND (USA/12A/120mins)
Directed by Justin Lin. Starring Chris Pine, Karl Urban, Zoe Saldana, Zachary Quinto, Simon Pegg, Idris Elba, Sofia Boutella, Anton Yelchin.
THE PLOT: “It’s easier than you think to get lost”; three years into their five-year mission through space, the crew of the USS Enterprise set out on a rescue mission from Federation Starbase Yorktown. Deep in a nebula cutting off radio contact, the Enterprise is attacked leaving Captain Kirk (Chris Pine) and his closest cohorts stranded on an unknown planet, struggling to find a way back home.
THE VERDICT: One of the most anticipated blockbusters of summer 2016 is finally here, and the good news is that giving the screenplay to certified fanboy Simon Pegg – and co-writer Doug Jung – and direction to ‘Fast & Furious’ alum Justin Lin means that ‘Star Trek Beyond’ is fun, action packed and touches on just the right amount of humour.
The cast are all back for this new instalment; Chris Pine, Zoe Saldana, Karl Urban, Zachary Quinto, Anton Yelchin, Simon Pegg and John Cho all reprise their roles – it’s rather heartbreaking to see Yelchin get a huge amount of screentime in this outing, since the film was not only to be his last Star Trek flick, but is also dedicated to him – and they are joined by Idris Elba, Shohreh Aghdashloo, Sofia Boutella and Danny Pudi. All do well in their roles, with Elba making Krall menacing and frightening, Simon Pegg delivering his best Scottish accent and most humourous lines to date, Sofia Boutella bringing some fun and much needed new blood as Jaylah and Anton Yelchin obviously having fun with his action packed role.
Screenwriters Doug Jung and Simon Pegg have learned from the problems with ‘Star Trek Into Darkness’ and made the story of ‘Star Trek Beyond’ smaller, for the most part. There is plenty of action and comedy, which are carefully balanced, and this new story fits well with the films that have gone before. Moving the action to deep space was a stoke of brilliance, as was separating the characters throughout the film so the audience gets to see some new dynamics at work. The dialogue is fun throughout – and there is even a nod to one of Pegg’s past projects in the film – and difficult situations are dealt with tactfully and respectfully.
As director, Justin Lin brings the energy of his previous work to ‘Star Trek Beyond’, making the two hour running time zip past, and keeping the audience engaged as we see familiar characters thrown into something well outside their comfort zone. The pacing is strong and the comedy well timed, with the nods to the past 50 years of ‘Star Trek’ subtle but warm. There are times when the film struggles to maintain that warmth, however, and by the time the villain’s motivation is given it’s almost… almost too late. That said, there is a lot of fun to be had with ‘Star Trek Beyond’, particularly the final set piece, which is only marginally too long.
In all, ‘Star Trek Beyond’ learns from the mistakes of ‘Star Trek Into Darkness’, with Simon Pegg and Doug Jung delivering a strong script full of heart, comedy and warmth. Justin Lin ramps up the action throughout the film and the cast do well in their roles, with franchise newcomer Sofia Boutella easily stealing the show. Issues arise with keeping the audience engaged and the final set piece feeling drawn out, but ‘Star Trek Beyond’ is as fun as it should be.
RATING: 4/5
Review by Brogen Hayes

THE BFG (UK | Canada | USA/PG/115mins)
Directed by Steven Speilberg. Starring Mark Rylance, Bill Hader, Jemaine Clement, Ruby Barnhill, Rafe Spall, Rebecca Hall.
THE PLOT: “Don’t get out of bed. Don’t go to the window. Don’t look behind the curtains” Sophie (Ruby Barnhill) reminds herself every night during Witching Hour – which she alone knows comes at 3am – but the night she can’t help herself is the night she sees something that changes her life forever; a giant. The BFG (Mark Rylance) snatches Sophie from her home at the orphanage and takes her to Giant Country, where he shows her all manner of marvellous things, but there are more giants than the big friendly one, and the two new friends must come up with a plan to stop them from eating human beings.
THE VERDICT: ‘The BFG’ is based on the children’s book of the same name by Roald Dahl, and transports the audience back to the time that is was published in 1982. Of course, this is a world created by Roald Dahl, so while we may remember the time, director Steven Spielberg has been sure to make The BFG look like a world created by Dahl; magical, strange and just a little bit scary.
Ruby Barnhill leads the cast as Sophie, and does incredibly well with the role. Sophie is precocious, demanding and curious, and while she makes The BFG’s life better, it is she who learns a multitude from him. Barnhill makes Sophie a strong central character and ones who fans of the film will find themselves wishing they could trade places with, so they too can go on their own adventure. Mark Rylance towers over the rest of the film – both literally and figuratively – as the big friendly giant. Rylance has fun with the BFG’s idiosyncratic and charming way of speaking, his emotion and warm heart, making him the heart and soul of this film as well. The rest of the cast features Rebecca Hall, Rafe Spall, Jemaine Clement, Bill Hader, Adam Godley, Daniel Bacon and Penelope Wilton who gets a promotion from her role as Harriet Jones, Prime Minister in ‘Doctor Who’, to Queen of England in ‘The BFG’.
The screenplay, written by Melissa Mathison, is incredibly faithful to Roald Dahl’s book, keeping in all the wonderful turns of phrase from the BFG himself, the resolution and crucially, keeps it set in England. There are times where the film feels a little trite, but this could be the fault of an audience jaded by big stories playing out in a big way. Director Steven Speilberg not only coaxes great performances from his actors, but keeps the tone light and charming, as well as pacing the almost 2 hour running time well that the lags in energy feel like mere dips, as opposed to crashes. As well as this Speilberg puts his trademark sense of wonder and nostalgia onto the film that will skim over kids heads, but will certainly make adults nostalgic for the time they first read Dahl’s book.
Elsewhere, the design of the film is smart, with ‘The BFG’ using ordinary objects in extraordinary ways, and although we may have seen better CG in other projects, ‘The BFG’ is realised well and any imperfections can be ignored since the character is so endearing, and he is supposed to look a little otherworldly after all.
In all, ‘The BFG’ is a fun film for the whole family. Adult fans of Roald Dahl will be swept away in a wave of nostalgia and fun, and younger fans and newcomers will be delighted at the detail used in bringing this story to the screen. The cast are strong, with Mark Rylance standing head and shoulders above the rest as the warm, gentle and thoroughly human BFG. There are issues with pacing from time to time, however, and at 115 minutes, the running time does feel a little long.
RATING: 4/5
Review by Brogen Hayes

CHEVALIER (Greece/TBC/105mins)
Directed by Athina Rachel Tsangari. Starring Giannis Drakopoulos, Kostas Filippoglou, Yiorgos Kendros, Panos Koronis, Vangelis Mourikis.
THE PLOT: A group of Greek fishermen, faced with the long and boring journey back to Athens, come up with a game to see who is the best among them. Named Chevalier after the Chevalier ring that is the prize, then men judge one another on absolutely everything; from the way they walk to the size of their penis, the ay they talk to their cholesterol levels.
THE VERDICT: The premise of ‘Chevalier’ is an interesting one, and one that has plenty of room for comedy and sharp observations, and although this is touched on throughout the film, the expectation that this game will ramp up into something competitive and explosive is never truly lived up to.
The cast of the film is made up of Yiorgos Kendros, Panos Koronis, Vangelis Mourikis, Nikos Orphanos, Makis Papadimitriou, Yorgos Pirpassopoulos and Sakis Rouvas, and while we get to know a little about each of the characters throughout the film, none of the actors are truly given a chance to round out the characters so that they feel real. There are moments of greatness but these are swiftly undermined by the film feeling drawn out and slow.
Screenwriters Athina Rachel Tsangari and Efthymis Filippou appear to have set out to show just how ridiculous a throwaway game can get, when it is mixed with confined quarters and strong egos, but even though there are times where the film falters on the edge of drama, explosion or something more than a game to break the monotony, the drama never comes and the film feels more like it peters out, rather than ends satisfactorily.
As director Athina Rachel Tsangari keeps the first half of the film moving quickly, but as son as it becomes clear that this game is not going to divide the group, and even though each man is taking it seriously, ever really damage friendships or relationships, the energy of the entire film drops. There is a feel that there was an attempt to make Chevalier an absurd and over the top film but, apart from a scene where penis measuring becomes personal, this absurdity is never capitalised upon.
In all, ‘Chevalier’ feels rather like a wasted opportunity. Under stronger direction, this could have been a film that examined the dynamics of a group when faced with competition, but as it stands, the film is underwhelming and lacks energy.
RATING: 2/5
Review by Brogen Hayes