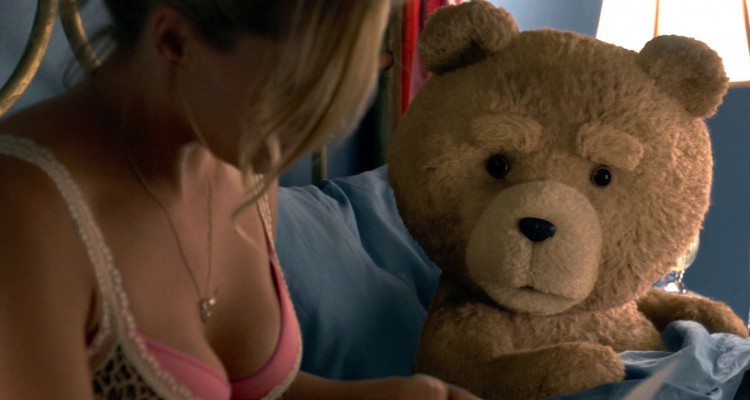 TED 2 (USA/16/115mins)
Directed by Seth MacFarlane. Starring Seth MacFarlane, Mark Wahlberg, Amanda Seyfried, Sam Jones, Morgan Freeman, Liam Neeson, Tom Brady.
THE PLOT: After Ted (Seth MacFarlane) marries the beautiful but ditzy Tami-Lyn (Jessica Barth), it only takes one short year for the two to start having troubles. Convinced that a baby would solve their problems, the two start chasing down possible sperm donations or adoption, unaware that they are drawing Ted to the State’s attention. When Ted is deemed to not be an actual person, Ted, John (Mark Wahlberg) and their lawyer Samantha (Amanda Seyfried) team up to fight for Ted’s recognition and human rights.
THE VERDICT: TED, released in 2012, was a surprise hit, and surprisingly funny, even though the jokes, the swearing and the novelty had just about worn off by the end of the film. This week, Ted is back with a sequel, and although there are a couple of giggles in there, this is not the film to put the shine back on this foul mouthed talking teddy bear.
Seth MacFarlane and Mark Wahlberg reprise their roles as Ted and his best friend John, respectively. They still talk in over the top Boston accents, get high and try to offend as many people as possible, so nothing has changed there. Jessica Barth returns in an expanded role as Tami-Lyn, although she is never given a chance to round out her character. Amanda Seyfried does fairly well as stoner lawyer Samantha, making the character sweet and fun, with a serious side. Cameos abound in the film, with Patrick Stewart, Morgan Freeman, Sam J. Jones, Tom Brady, Liam Neeson and John Slattery all turning up at some point.

Seth MacFarlane, Alec Sulkin and Wellesley Wild’s screenplay has some funny moments – Amanda Seyfried finally addresses the fact that she has eyes of similar size to Gollum – but the laughs are few and far between. Although there is a story here that has merit, it is almost totally ignored for whole sections of the film, for more gags and silly situations to be forced in. In fact there are times when the entire film seems to be made up of vignettes and stand alone scenes, rather than allowing these to form a cohesive film. As well as this, the villain turns out to be the one from Ted, with almost the exact same motivations and resolution as the first film.

As director, it is clear that Seth MacFarlane is trying to hark back to the Golden Age of Classical Hollywood cinema with TED 2 – think the musicals of Gene Kelly and the comedies of Marilyn Monroe – but with a lot more swearing. This works at times, but since the film feels like gags stuck together with a story, this never quite works. The performances are fine, but the direction and actors are hampered by a script that never really allows them to play a character, only a caricature.
In all, there are a couple of giggles in TED 2, and it is clear that MacFarlane is trying to hark back to the classical age of Hollywood cinema, but the joke is over, the novelty has worn off and the whole thing feels a little familiar. Fans will love it but there is very little here for the non-fan. Oh, and the post-credits scene is not really worth the wait.
Rating: 2/5
Review by Brogen Hayes

LOVE & MERCY (USA/12A/121mins)
Directed by Bill Pohlad. Starring Paul Dano, John Cusack,Paul Giamatti, Elizabeth Banks, Jake Abel.
THE PLOT: Based on the real life of Brian Wilson – legendary musician and founder member of The Beach Boys – Love and Mercy is not only a look at musical genius, but also an examination of power and control, and misdiagnosed mental illness.
THE VERDICT: There is little doubt that Brian Wilson has had an incredible career, and a tumultuous personal life, and for the first time, this is portrayed on the big screen in LOVE & MERCY.
Both Paul Dano and John Cusack take on the role of Brian Wilson, at different stages in his life. Dano plays Wilson during The Beach Boys years, and not only nails the look and passion of the character, but also the confusion of a man on a slow descent into undiagnosed mental illness. Dano plays Wilson as a man obsessed with music and perfection in the same, and it is perhaps this that leads to his mental troubles being ignored for so long. John Cusack takes on the role of Brian Wilson in the 1980s, when his mental struggles had been acknowledged but wildly misdiagnosed, and he was under the thumb of a controlling and bullying doctor; Eugene Landy (Paul Giamatti). There are times when it doesn’t feel as though Dano and Cusack are playing the same character, but when ti clicks, it truly works. Elizabeth Banks plays Melina Ledbetter, a woman who dated Brian Wilson in the 80s, only to find herself pushed away by Landy and fighting for Wilson’s autonomy. Paul Giamatti brings the creepy, overpowering and controlling Eugene Landy to life in a terrifying and calm performance. The rest of the cast is made up of Jake Abel, Kenny Wormald, Joanna Going and Brett Davern.
The story, written for the screen by Oren Moverman and Michael A. Lerner blends together Brian Wilson’s life in the 60s and 80s, showing his slow descent into mental illness, his strength as a musician and the personal struggles that he went through in his life. The story is carefully woven together, with single moments or lines of dialogue allowed to hint at a deeper and darker back story that is enough for the film to keep going, and for the audience to get the picture but remain curious. There is both the feeling of Lenny Abrahamson’s FRANK to the film, as well as parallels to the final years of Michael Jackson, in that Wilson is shown to be a man for whom music is his redemption, yet is under the thumb of a controlling scam artist who is more interested in making money than helping his patient.
Incredibly, LOVE & MERCY is director Bill Pohlad’s second feature behind the camera – he has an impressive career as a producer though – and he tells Wilson’s story with tact and seeming honesty. The highs of Wilson’s joy at recording Pet Sounds contrast wonderfully and heartbreakingly with his desperation to get out from under Landy’s control but being powerless to do so. The film is beautifully shot and carefully edited to give a creeping sense of fear and powerlessness.
In all, LOVE & MERCY is a careful examination of mental health, power, control and genius. Dano shines as the younger Brian Wilson, and when Cusack hits the right notes, he’s powerful. Elizabeth Banks shows her talent for drama and Giamatti is truly unnerving as Eugene Landy. Love and Mercy is one for the fans of Brian Wilson, but is carefully and wonderfully put together, to tell a story of genius and heartbreak.
RATING: 4/5
Review by Brogen Hayes

SONG OF THE SEA (Ireland/Denmark/Belgium/Luxembourg/France/PG/93mins)
Directed by Tomm Moore. Starring Brendan Gleeson, David Rawle, Lisa Hannigan, Fionnuala Flanagan, Lucy O’Connell, Jon Kenny, Pat Shortt, Colm O’Snodaigh, Liam Hourican, Kevin Swierszcz, Will Collins.
THE PLOT: Young Ben (voiced by Rawle) lives on a remote island off the coast of Ireland with his great, big, strong dad (Gleeson) and his annoying, irritating little baby sister, Saoirse (O’Connnell). She can’t speak; Ben reckons he can’t be heard. The main reason why Ben thinks his little sister is annoying and irritating though – other than the simple fact that she’s a girl – is that he blames her somewhat for the disappearance of their mother shortly after Saoirse’s birth. When Saoirse turns six, she finds a shell horn belonging to her mother, and it leads her a white fur coat, and into the sea – where, miraculously, the little girl turns into a seal. When the two siblings are sent to live with their grumpy grandmother (Flanagan) in the city, the sea keeps calling them, with a group of Faeries informing Ben that he must find that white fur coat again, so that his sister can sing the Song Of The Sea, and finally lead them home. And so the two young kids head out on an epic search…
THE VERDICT: As with Cartoon Saloon’s debut feature, 2009’s THE SECRET OF KELLS, there’s no denying the beauty of the animation in SONG OF THE SEA. And as we got into the Celtic mystic once again, there’s no denying the script lacks that certain kick.
With a gameplan that’s far more Mayazaki than Mickey Mouse (MY NEIGHBOUR TORTORO, along with Mike Newell’s Into The West, were major influences here), this little Irish animation studio upstart is clearly happy taking the long road to success. It may mean that the profit margin on THE SECRET OF KELLS didn’t begin to trickle in until six years after its initial release, but for these Kilkenny cats, it would seem quality beats Quick Ratio casino cash-ins every time.
It’s an admirable approach, but it’s clear that Cartoon Saloon still have some way to go. The glowing reviews (especially abroad) and golden rosettes (the Oscar nomination, the recent IFTA for Best Irish Feature) help the brand, as does the meticulous, glorious 2D animation, but, as with TTHE SECRET OF KELLS, the script here would make John Lasseter punch a limited edition Plush Buzz Lightyear Tampax Dispenser. This is THE LITTLE MERMAID for vegans. That potent mix of slapstick and soppiness that Pixar (and, lately, the Lasseter-led Disney) manage so well – the quick-fire wit, the winks to the audience, the punch to the gut – are largely absent here, and you end up with a film that parents would like their children to love. Rather than a film that children would simply love. Less Klimt, more Krusty The Klown.
Still, there’s a good message here – never trust your granny. Ever.
RATING: 3/5
Review by Paul Byrne

THE REUNION (Sweden/Club/88mins)
Directed by Anna Odell. Starring Anna Odell, Anders Berg, David Nordstrom, Erik Ehn, Fredrik Meyer, Sandra Andreis, Kamila Benhamza, Niklas Engdahl.
THE PLOT: At a 20-year school reunion, late arrival Anna Odell (Odell) is clearly not happy with her former classmates. Anna was bullied in school. And she wants everyone to be reminded of that fact tonight, standing up to give a speech that outlines the childhood cruelty that made her schooldays a misery. Unsurprisingly, such rain on this anniversary parade doesn’t go down to well with her former classmates, and Anna soon finds herself being ejected, rejected once more. But, hey, this is all just a staged drama organised by Anna Odell, and she soon has her real former classmates around, to watch the drama unfold, so she can guage their reactions. Some are happy to take a walk down misery lane with Anna, whilst others – usually those higher up the school food chain – refuse to engage. So, Anna tracks them down, eventually confronting the bully who most made her early years torture…
THE VERDICT: Hey, it’s Swedish, it’s a family gathering, gone horribly wrong, around the dinner table – man, that got my heart racing there. Until about 10 minutes into this self-indulgent, so-so sad-sack movie that simply reminds you just how incredible Thomas Vinterberg’s FESTEN (1998) really is.
Very much Anna Odell’s movie, the Swedish artist not only writing and directing but taking on the lead role too, THE REUNION feels more like art installation than movie. The fact that Anna Odell plays a character called Anna Odell adding to the fact.
One of those movies that you can, at a push, admire but not actually enjoy, THE REUNION makes you want to go out and punch a schoolkid. Wonder what Odell would make of that…?
RATING: 2/5
Review by Paul Byrne