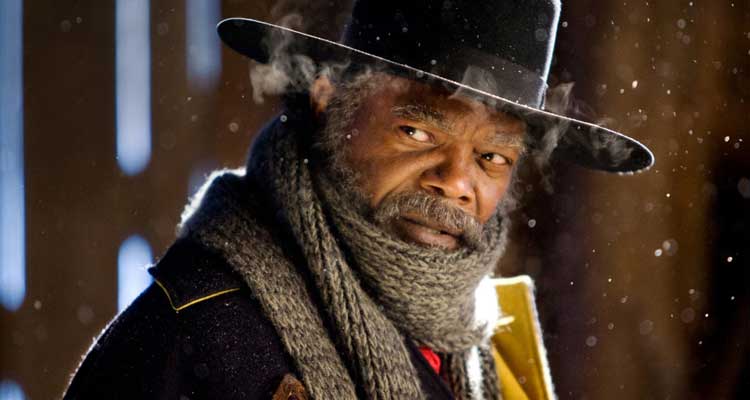 THE HATEFUL EIGHT (USA/18/167mins)
Directed by Quentin Tarantino. Starring Kurt Russell, Samuel L. Jackson, Jennifer Jason Leigh, Bruce Dern, Walter Goggins, Damián Bichir, James Parks, Dana Gourrier, Zoe Bell, Michael Madsen, Tim Roth.
THE PLOT: In the middle of a bitterly cold Wyoming winter, and with a blizzard on the way, two bounty hunters and a wanted woman take shelter in a cabin in the mountains. When they get there, however, they find the place already filled with travellers hiding out and, although the bounty hunters have a shaky alliance, this is about to be tested in a room full of opinionated, dangerous and reprehensible people.
THE VERDICT: The eighth film by Quentin Tarantino – seemingly he counts the two ‘Kill Bill’ films as one – has been dogged with trouble since before shooting even began. An early version of the script was leaked in January 2014 causing Tarantino to temporarily drop the project before a live reading of the script convinced him to go ahead. Now that the film’s release date approaches, The Guardian reports that three UK cinema chains – Picturehouses, Cineworld and Curzon – will not be showing the film. Sigh. All of this before we even get to the film.
‘The Hateful Eight’ is populated with wonderful actors; some of whom have worked with Tarantino before – Samuel L. Jackson, Walton Goggins, Tim Roth, Kurt Russell, James Parks, Zoe Bell, Michael Madsen – and others who have not, including Demián Bichir and Channing Tatum. Most are given the chance to act the crap out of the movie and seem to have a whale of a time doing it, notably Tatum, Jackson and Goggins – but others have less of a chance, being reduced to nothing more than vessels for dialogue. Oh and Tim Roth sadly seems to be doing an impersonation of Christoph Waltz in ‘Inglourious Basterds’.
The screenplay for ‘The Hateful Eight’ is laden down under what must be hundreds and hundreds of pages of dialogue. This starts the film off well, with exposition being handled carefully and plenty of backstory to the main characters being given. By the second and third time we hear the same stories however, The Hateful Eight becomes repetitive, puerile and rather boring. Add to this the fact that it is difficult to root for any of the main characters – I know, I know; ‘hateful’ – and the audience begins wondering why we are watching this film at all. By the time the final shootout eventually happens, it is difficult to care whether any of the characters survive. The final half hour of the film strays close to Tarantino’s smart, slick and quick style of filmmaking, only for the bloated script to overwhelm proceedings once more.
As director, Tarantino seems to have been influenced by the Westerns of both small and big screen in the 60s and 70s, and wants to pay homage to a genre that he loved. The trouble is that The Hateful Eight so obviously was created by a filmmaker who stubbornly insists on paying homage to the greats of the past that his film feels egotistical and backward looking, while trying to be contemporary and fun. A combination that does not work, and that’s before we add in the racism and repeated and unnecessary use of over the top violence for the sake of gore, and the oft-repeated use of one of the most offensive terms for African American people.
In all, ‘The Hateful Eight’ is bloated, overly long and self-indulgent. Tarantino seems determined to bring back a style of filmmaking that has long since died out, without wondering why this change happened in the first place. Showing film company logos from the 70s is one thing, but there is little understanding here of what made these over the top Westerns great in the first place, and there seems to be no-one able to reign Tarantino in, edit the film tightly and cut the self-indulgent homage that feels more like pastiche. ‘The Hateful Eight’ feels like a vanity project from a 15-year-old boy who was told once that he writes great dialogue.
RATING: 1/5
Review by Brogen Hayes

A WAR (Denmark/15A/115mins)
Directed by Tobias Lindholm. Starring Pilou Asbæk, Tuva Novotny, Dar Salim, Søren Malling, Charlotte Munck, Alex Høgh Andersen.
THE PLOT: Claus (Pilou Asbæk) is a company commander stationed in Afghanistan. When one of his men is killed by stepping on a landmine he ventures out into the field to try and keep morale up, as his wife Maria (Tuva Novotny) struggles with the couple’s three children at home in Denmark. After Claus makes a split second decision under fire, he finds himself back home under a cloud of suspicion.
THE VERDICT: Director Tobias Lindholm returns with his second feature film – after 2013’s ‘A Hijacking’ – with another film about the two sides of conflict, while also examining the pressures of long distance relationships.
Once again, Pilou Asbæk leads the film, as he did with ‘A Hijacking’, and once again he alternates between fear and the courage of his convictions. Claus is a character the audience has faith in and can root for, since he so deeply cares for the welfare of those he is stationed with, as well as trying his best to support his wife and kids back home. All of this changes in the second half of the film as Claus suddenly becomes the one needing care and support, and this turn in story is where Asbæk excels. The rest of the cast is made up of Tuva Novotny, Dar Salim, Søren Malling, Charlotte Munck and Alex Høgh Andersen.
As screenwriter, Tobias Lindholm makes sure the audiences have a level of knowledge of the event that turns Claus’ life upside down that perhaps even Claus himself does not have. However, for the rest of the film we are learning information as Claus does, and swinging between empathising with a man who made a terrible choice in a difficult situation, and the troubles that his wife now faces with having him home but under a new threat.
As director, Lindholm allows the tension to ebb and flow through the first half of the film, then to build solidly through the second. The film is well paced, although it is not always clear where it is going to lead us, and the second part of the story is slower and more dialogue heavy than the action laden first hour. That said, the performances are strong, and it is always clear to the audience that Claus is the focus of the story, although perhaps his wife’s story is equally as interesting, and the choice to split focus for the first hour of the film makes sense, but does not necessarily work.
In all, ‘A War’ examines the terrible choice between sparing someone else’s life and saving your own. Pilou Asbæk is strong as ever, and the film makes for gripping viewing, but the split focus of the first hour of the film leaves the film feeling a little scattered, and the second hour of emotional dialogue does not necessarily fit with the feel of the rest of the film. There is certainly plenty to engage with in ‘A War’, it is just a shame the film feels rather messy at times.
RATING: 3.5/5
Review by Brogen Hayes

LAST HIJACK (Netherlands | Germany | Ireland | Belgium/12A/83mins)
Directed by Tommy Pallotta and Femke Wolting.
THE PLOT: Directors Tommy Pallotta and Femke Wolting take a look at the recent problem of Somalian pirates targeting freight and oil ships off the coast of the country. The difference is that this time, the story is told from the perspective of Mohammed, a man who is a seemingly proud to be a pirate.
THE VERDICT: The idea that inspires Last Hijack is an interesting one; to tell the story of the rise in pirate activity from Somalia from the perspective of the pirates. The trouble is that while the idea for the film is an interesting one, the execution leaves a lot to be desired.
Directors Tommy Pallotta and Femke Wolting focus on one man for the purposes of the film. Mohammed and his family are the focus of the film; his parents bemoaning the fact that their son does not know his children, cannot remember the names of his wives and should not be a pirate. Mohammed, on the other hand, recalls the days when he first “went to sea” and was hailed as a hero when he came home. As well as this, a radio presenter whose show is dedicated to cracking down on pirates is featured in the film. This is arguably the most interesting story featured, as this man is consistently harassed and threatened for the work he is doing, but other than a side note, he doesn’t really feature.
The film makes heavy work out of labouring the symbolism of the story through animated sequences where Mohammed transforms into a bird and attacks ships, and this animation is also used to tell stories from the past, such as Mohammed’s first time capturing a ship and the loss his family suffered from a landslide when he was a child. There is a hint that Mohammed learned his criminal ways from his father who used to rob from cars, but this is also quickly thrown to the side.
While the first half of the film talks to the pirates and the men who want to join them about their spoils, their reasons for attacking ships and the spoils of their activities, the second half turns its attention to Mohammed taking a new bride on the condition that he will stop going “to sea”. This is where the film loses focus and the audience interest, as it turns into a documentary about marital strife, rather than one about the cultural and economic reasons why these men turn to crime. As well as this, the film lacks resolution, as it just seems to stop in the middle of the story; we never know if Mohammed keeps his promise to turn away from piracy, or what happens when he inevitably does go back to sea.
In all, ‘Last Hijack’ has an interesting idea at its heart but lacks focus, making this film that could have been about the social and economic troubles in Somalia that force men to turn to crime into a documentary about a rather unlikeable man making criminal choices with little regard for the consequences. There was an opportunity here that was completely missed.
RATING: 2/5
Review by Brogen Hayes