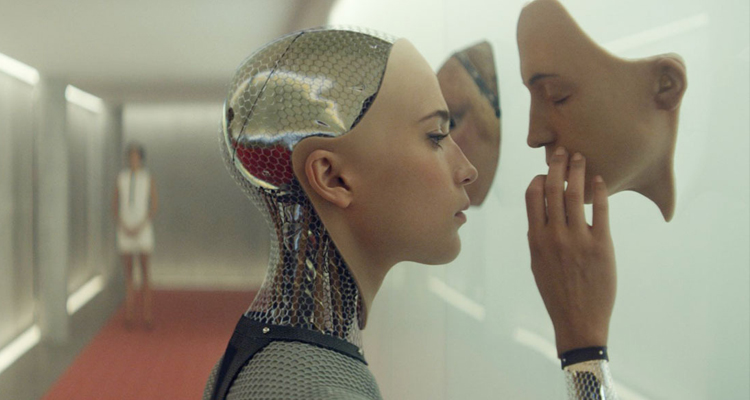 We review this week’s new cinema releases, including EX MACHINA, A MOST VIOLENT YEAR and THE GAMBLER…

EX MACHINA (USA | UK/15A/108mins)
Directed by Alex Garland. Starring Domhnall Gleeson, Oscar Isaac, Alicia Vikander.
THE PLOT: Caleb (Domhnall Gleeson), is a talented programmer who wins a staff lottery to spend a week with their reclusive CEO Nathan (Oscar Isaac). Once there, Caleb is drawn into Nathan’s world, and finds himself part of an experiment to prove a new brand of artificial intelligence.
THE VERDICT: It seems like it has been a long time since we have had a film about artificial intelligence, but as much as EX MACHINA presents itself as such, it is also a film about relationships, lies and manipulation.
Domhnall Gleeson continues his run of choosing great roles, with his turn as Caleb. Gleeson has shown, time and again, that he is capable of playing the every man, and does so again here. Gleeson easily makes Caleb the emotional heart of the film, and it is with him that our affection lies. Oscar Isaac treads a thin line between enthusiastic and creepy, incredibly well. Nathan turns from one of the guys, to megalomaniac within the blink of an eye, and it is the fact that Caleb is never sure how Nathan will react, that keeps the tension building in the film. Alicia Vikander rounds out the central trio as Ava, the AI creation that Nathan has built. Vikander keeps Ava curious and polite, but gives her enough emotion, innocence and warmth to keep her interesting. Vikander conveys gentle kindness through her body language and way of moving as Ava, and this grace adds a layer of humanity to the character.
The story, written by Alex Garland, feels familiar in some ways, and is definitely reminiscent of Pedro Almodovar’s THE SKIN I LIVE IN. There are times where it seems obvious where the film is going to end up, but through twists and turns along the way, it manages to keep the audience guessing. The notion of a soul is never expressly mentioned, but is obviously at the heart of the debates that Caleb finds himself in both internally, and outwardly.
As director, Alex Garland keeps the tension building nicely throughout the film. Since Gleeson’s performance is so strong, we utterly believe what he believes, but Garland also allows Isaac’s charm and confidence to put doubt into the film. The cinematography by Rob Hardy is both austere and beautiful, bare and abundant, and serves to underline the unsettling, disconcerting feel of the film.
In all, EX MACHINA is a tense and tightly wound sci-fi film that is as much about human emotion and feeling as it is about artificial intelligence and cruelty. Vikander, Gleeson and Isaac are a strong and mesmerising central trio, although there are times when twists, turns and sabotage are easy to see coming. Still, a strong directorial debut from veteran screenwriter Garland, which cements his place as a director to watch.
RATING: 4/5
Review by Brogen Hayes

MOVIES.IE’S ONE TO WATCH!
A MOST VIOLENT YEAR (USA/12A/125mins)
Directed by J.C. Chandor. Starring Oscar Isaac, Jessica Chastain, Albert Brooks, David Oyelowo, Alessandra Nivola, Elyes Gabel, Catalina Sandino Moreno, Peter Gerety, Christopher Abbott.
THE PLOT: New York City, 1981, and Abel Morales (Isaac) is signing on the dotted line, buying up the neighbouring property to the oil distribution business he inherited from his wife (Chastain) – and he’s got 30 days to close the deal. His business manager (Brooks) reckons it’s worth the risk, but just as they exchange congratulations, one of Abel’s drivers, Julian (Gabels), is being hijacked out on the freeway – and another of Abel’s Standard Oil trucks is being relieved of its $6,000 load. The hijacks have been going on for two years, and police officer Lawrence (Oyelowo) hasn’t yet solved the case. Being a little distracted by his building of a case against Standard Oil, with the charges being filed next week. The pressure is on, and Abel begins to slip under, as the hijackings continue, the law closes in, and the suspicion that it’s all an inside job begins to grow…
THE VERDICT: This is a movie that you know you’re going to love right from the opening scenes – the look, the feel, the characters, the set-up. From the get-go, A MOST VIOLENT YEAR plays like a great 1970s American movie. And it pretty much is. Give or take a decade or two.
Writer/director Chandor (who made his mark with MARGIN CALL) holds the reigns beautifully on a crime drama that would have been so easy to Tarantino the crap out of. The cast helps, of course, Oscar Isaac rarely better, and Chastain once again proving she’s the true heir apparent to Streep. The presence of the gravel-throated Albert Brooks instantly reminds you of his recent turn in Drive, and the comparison works well here. Know there’s a truckload of Oscar contenders vying for your pocket money right now, but amidst all the worthy posturing, A MOST VIOENT YEAR might just be the most satisfying of the bunch.
RATING: 4/5
Review by Paul Byrne

THE GAMBLER (USA/15A/111mins)
Directed by Rupert Wyatt. Starring Mark Wahlberg, Jessica Lange, Brie Larson, John Goodman.
THE PLOT: Jim Bennett (Mark Wahlberg) is a literature professor, with a sideline as a high stakes gambler. When his past debts come back to haunt him, it seems that Bennett is digging himself deeper and deeper into the red. With loan sharks out to get him, Bennett has no choice but to play to win.
THE VERDICT: THE GAMBLER, directed by Rupert Wyatt, is a remake of the film of the same name starring James Caan which, in turn is based on the Dostoyevsky novel. Mark Wahlberg steps away from the Wahlberg-ian roles of his past to play a verbose and intelligent literature professor. Wahlberg does well with the rhythms and seeming arrogance of the character, but it is in the softer, more vulnerable scenes that he falters.
Brie Larson plays Amy, a young student who starts off as the love interest in the piece but quickly descends into nothing more than a vehicle for exposition. Jessica Lange brings the frosty as Bennett’s wealthy but withholding mother, John Goodman has a great speech about being in the right position to tell people to fuck off, and Michael Kenneth Williams turns up as a loan shark and gangster.
William Monahan’s screenplay attempts to show how an intelligent person becomes bored when there is nothing to challenge them, and resorts to high stakes gambling for thrills. The trouble is that Bennett more often comes off as pretentious than an everyman, and makes decisions that the audience does not understand, for the sake of creating tension, and showing just how someone can come from privilege, but still end up self-destructive and despondent. Brie Larson’s character is quickly sidelined and, although John Goodman has a terrific monologue or two, all the to-ing and fro-ing between different debtors, and a rather clunky payoff, mean that THE GAMBLER sinks rather quickly.
As director, Rupert Wyatt creates an interesting and engaging first act for the film, but soon loses his way as Bennett becomes embroiled in a murky underworld. Plotlines run across one another without any apparent reason, and motivations for the cast are exceedingly unclear. It is only a matter of time before The Gambler sinks under the weight of its own ambition, and audience sympathy is quickly lost.
In all, THE GAMBLER is a film that tries to be something that it’s not. The film lacks the dark dealings of Monahan’s THE DEPARTED, the slick touch of Ocean’s Eleven, as well as motivation, clarity and audience empathy. Walhberg may be up for trying new challenges, and while he certainly tries here, THE GAMBLER is not the film it is trying to be, nor is it coherent, or remotely entertaining. Instead it is frustrating, muddled and unsatisfying.
RATING: 2/5
Review by Brogen Hayes