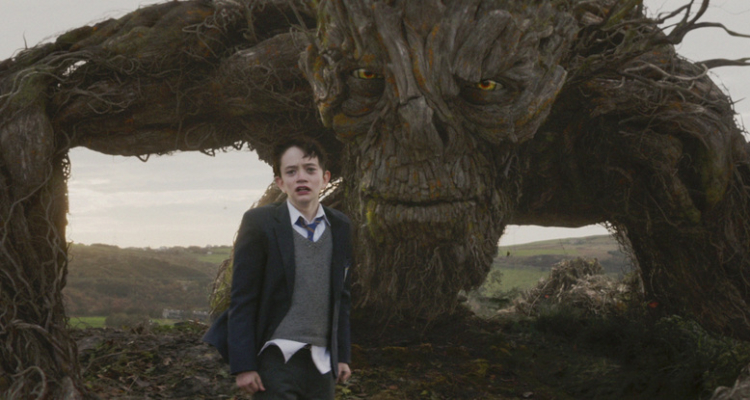 A MONSTER CALLS (Spain | USA | UK | Canada/12A/108mins)
Directed by JA Bayona. Starring Sigourney Weaver, Felicity Jones, Liam Neeson, Lewis MacDougall, Toby Kebbell
THE PLOT: As 12 year old Conor (Lewis MacDougall) struggles to come to terms with his mother’s terminal illness, a Monster (Liam Neeson) comes to call on him; “I have come to get you Conor O’Malley”. Although the monster is massive and intimidating, Conor refuses to be frightened, and as the Monster tells him three fables, Conor struggles with the knowledge that the Monster wants Conor to tell him the truth behind his recurring nightmare.
THE VERDICT: Based on the beloved and heartbreaking book by Patrick Ness, ‘A Monster Calls’ is a beautiful, heart rending and haunting tale of a young boy trying to come to terms with something that feels too big to fit into his world. Ness adapted the screenplay from his own novel, which in turn began life as an idea by writer Siobhan Dowd, who never got to finish her work as she died from cancer before she got started.
Lewis MacDougall leads the cast as Conor O’Malley, the young boy on whom the Monster calls. MacDougall is perfectly cast as the bewildered and raging pre-teenager, who desperately wants to understand just what is happening to his world. Filled with rage and desperate sadness, MacDougall ably carries the film, and makes Conor an everyman when it comes to grief and anger at the world; a character that audiences can utterly relate to. Felicity Jones plays Lizzy, Conor’s mother, and she makes the character warm but frail, as she tries to out a brave face on inevitability. Sigourney Weaver has a smaller role as Lizzy’s mother and Toby Kebbel plays Conor’s absentee father. Liam Neeson rounds out the cast as the voice of the titular Monster, bringing the character to life with all of his ferociousness, gentleness and wisdom.
Patrick Ness adapted the screenplay from his own novel, and does well in bringing the tale to the big screen. There are times when the film feels as though it is waiting for the Monster to return – as he does, time and again – as the structure of the story is built around the tales that he tells young Conor. This does not detract from the film as such, but it is noticeable that it does not follow the traditional structure of a feature film. Ness carefully treads the line between despair and rage, bringing the audience into the world with Conor, and allowing us to see how such a young kid deals with the biggest change he will ever experience. Isolation plays a huge part in the film, but it is carefully done in order to show the ways in which kids deal with problems too big for them to comprehend.
Director J.A. Bayona broke hearts with ‘The Impossible’ and scared audiences around the world with ‘The Orphanage’, so he is strong in the director’s chair for ‘A Monster Calls’. Bayona blends fear and anger, horror and mundanity throughout the film, while coaxing a wonderful performance from MacDougall, and making the world he lives in feel both fantastic and utterly normal. The pacing of the film dips slightly when the Monster is not on screen, but the animated sequences throughout the film are so beautiful, and the chemistry between the cast is so strong that it is easy for the film to claw this back when it needs to.
In all, ‘A Monster Calls’ is heart wrenching, haunting and filled with hope, and tells the most horribly mundane story in a simple, relatable and fantastic manner. Heart strings get tugged without the film ever feeling manipulative or overly sweet, and although there is horror at the film’s heart, that is where the spark of hope also lies, making ‘A Monster Calls’ a beautiful and special piece of work.
RATING: 5/5
Review by Brogen Hayes

SILENCE (Mexico | Taiwan | USA/15A/161mins)
Directed by Martin Scorsese. Starring Andrew Garfield, Adam Driver, Liam Neeson, Ciarán Hinds, Tadanobu Asano
THE PLOT: Based on Shusaku Endo’s acclaimed 1966 novel (which made it onto Japanese screens in 1971, courtesy of Masahiro Shinooda), ir’s 1643, and two young Jesuit priests, Rodriguez (Garfield) and Garrpe (Driver) are smuggled into Japan. Their mission, to find their MIA mentor, Ferreira (Neeson), the Colonel Kurtz of the piece having reportedly abandoned his faith, turned by Japan’s Edict of Expulsion, designed to ban and eradicate Christianity from its islands.
Anyone found worshipping a foreign deity could expect to face all kinds of medieval torture, but for Rodriguez and Garrpe, and their fresh peasant followers, such dangers are all part of the proving the faith.
Will our idealistic young Jesuits crack under the pressure? Or will they see the light? And is there any real difference between either option…?
THE VERDICT: I realise I’m in a very small minority here (I feel your pain, Rodriguez!), but, try as I might, I couldn’t quite bring myself to believe in ‘Silence’; this was a film that really, really tested my faith in Martin Scorsese.
By the end though, I just couldn’t muster up even a Christopher Moltisanti cheer.
Still, questioning my faith in Scorsese, I knew straight away that was a bad turn, given that the revered filmmaker is a far, far smarter man than me, and one who has, right from his days as an altar boy in St Patrick’s Cathedral in New York and through his darkest, most drug-fuelled days (I feel your pain, Robertson!), struggled to find the true meaning of our Lord in this god-forsaken world of ours.
And yet, I have to admit, the last 17 hours of this film kinda dragged for me. And I couldn’t get over the creeping sense that ‘Silence’ played like a student film that just got out of hand. Or worse, ‘Uncle Boonmee Who Can Recall His Past Lives’ meets ‘The Mission’.
So, forgive me, Father Marty, and everyone else who threw their heart and soul into this ambitious, stubborn, earnest exploration of man’s need for his own religion, for having the biggest god as your invisible best friend. Everyone else sees the Second Coming. I see Kurosawa’s ‘Father Ted’.
RATING: 3/5
Review by Paul Byrne

ASSASSIN’S CREED (UK | France | Hong Kong | USA/12A/108mins)
Directed by Justin Kurzel. Starring Michael Fassbender, Marion Cotillard, Jeremy Irons, Michael Kenneth Williams, Denis Ménochet
THE PLOT: Death Row inmate Cal Lynch (Michael Fassbender) has his sentence carried out, or so he thinks, until he wakes up in a facility in Madrid. Upon awakening, he is told be Sofia (Marion Cotillard) that he is to enter a machine named the Animus, to explore the memories of his ancestor Aguilar, an Assassin who gave his life to protect the fabled Apple of Eden from falling into the hands of the Knights Templar.
THE VERDICT: Based on a video game of the same name, ‘Assassin’s Creed’ reunites the director and two stars of last year’s ‘Macbeth’ – Fassbender, Cotillard and Kurzel – and attempts to break the curse of video games being turned into movies. The trouble is that issues arise in the film that cannot be addressed, and since the audience is a passive spectator rather than an active gamer, the narrative problems that arise are directly due to translation from small to big screen.
Michael Fassbender does fine in the dual role of Cal and his ancestor Aguilar. It is clear that the actor has a lot of fun with the action sequences in the film, but other than being a bit of a bad dude, we learn little about Cal and his motivations for taking part in the experimental DNA time travel. Marion Cotillard has very little to do as scientist Sofia, but as usual she is a magnetic presence on screen. Jeremy Irons gets to loom over everything as Rikkin, and the rest of the cast features Brendan Gleeson, Charlotte Rampling, Michael Jenneth Williams, Denis Menochet and Ariane Labed.
Michael Lesslie, Adam Cooper and Bill Collage sets itself alongside the timeline of the video game, and introduces new characters for the sake of movie storytelling. There is plenty in the film that feels as though it belongs in a video game, including some pretty terrible dialogue, and plotholes that undermine the emotional heart of the film, such as a man whose free will has been taken from him since he is living through the memories of his ancestor, fighting for the world to keep its free will. It seems that this particular niggle comes from the move from active gamer to passive audience member, but it is one that niggles nonetheless. As well as this, the central conceit of time travel through the memories of ancestors infused in our DNA is a weak one, one that does not work on screen the way it must have in the games, and it is difficult to come to terms with a central idea that makes little logical or emotional sense.
As director, Justin Kurzel seems to have focused on the physical rather than the emotional, and it is true that Michael Fassbender can pull some strong fight poses, but the way that the many set pieces of the film are shot means that it is hard to see the fight choreography at times, much less discern who is fighting whom. As well as this, the characters are thinly drawn, which may work for a video game where – again – the player is an active participant in the game, but it is hard to root for characters that we know little about, and others who are unapologetic killers who happen to have useful ancestors.
In all, ‘Assassin’s Creed’ is not quite as bad as many have feared, but it is a film that lacks an emotional heart, populated with thinly drawn characters and set pieces that are difficult to watch. There is talk of Fassbender wanting to make this franchise a trilogy, but in order to do so, there are big issues with ‘Assassin’s Creed’ that have to be fixed first.
RATING: 2.5/5
Review by Brogen Hayes