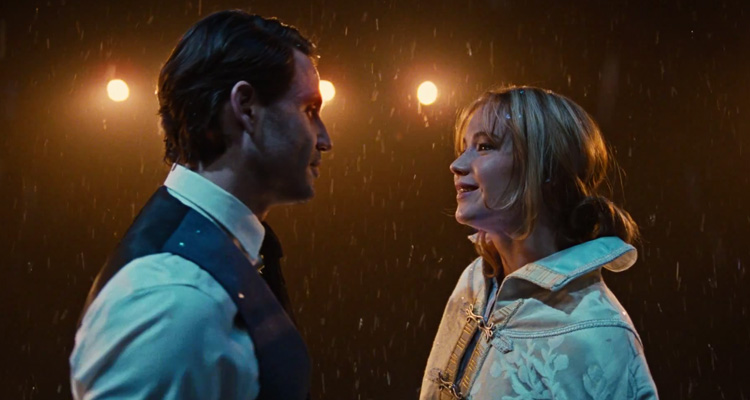 JOY (USA/12A/124mins)
Directed by David O. Russell. Starring Jennifer Lawrence, Bradley Cooper, Robert DeNiro, Elisabeth Rohm, Dascha Polanco, Isabella Rosselini.
THE PLOT: Even as a little girl, Joy Mangano (Jennifer Lawrence) always had a creative streak, and invented a quick release dog collar as a little girl, a design that was never patented. After having to clean up red wine and broken glass with her hands, Joy thinks up an idea for a self wringing mop but, while struggling to keep her family together and come up with the cash for this new product, Joy doesn’t quite tick all the boxes that she should.
THE VERDICT: The opening of ‘Joy’ tells the audience that the film is inspired by brave women, but this really makes it no clearer as to why we are treated to a two hour look at the life of a woman who went from struggling financially and creatively into a business mogul.
Jennifer Lawrence, as always, is wonderful as the overwrought but determined mother and entrepreneur at the centre of the film. Lawrence easily carries the emotional heart of the film, but even she cannot untangle the messy and manic plot of the movie. The rest of the cast is made up of Robert DeNiro, Elisabeth Röhm, Dascha Polanco, Bradley Cooper, Virginia Madsen and Isabella Rosselini. All do well with what they are given, but make no mistake; this is Jennifer Lawrence’s show, and she once again shows her versatility and capability by going from a film like The Hunger Games to this period drama about mops.
The story, written for the screen by director David O. Russell feels similar in part to that of ‘Silver Linings Playbook’; a child of a messy and chaotic family trying to make it on their own, although refreshingly, Lawrence is not playing a character that is diagnosable this time, instead everyone else just thinks she’s crazy. There is so much going on here that it is often hard to keep track of it all and when you do, find a reason to care other than Jennifer Lawrence making her character relatable.
As director, Russell coaxes another strong performance from Jennifer Lawrence, but since the audience has trouble investing in a product that is either in everyone’s homes or already surpassed by new technology, this feels less like the story of a strong and powerful woman and that of an ordinary and every day mop. The film is messily paced, with the actual idea for the mop coming almost as an afterthought of the family drama that envelops the title character.
In all, ‘Joy’ is the story of a woman who overcame all the odds to become a strong and powerful entrepreneur, but messy storytelling, messy pacing and far too much going on means that the audience finds it difficult to care about the future of the self-wringing mop, so the film goes from shiny and bright, to dull as mop water. However Lawrence and her performance go a long way to save the film from complete disaster.
RATING: 3/5
Review by Brogen Hayes

THE DANISH GIRL (UK|Germany|USA/15A/120mins)
Directed by Tom Hooper. Starring Alicia Vikander, Eddie Redmayne, Ben Whishaw, Amber Heard, Matthias Schoenaerts.
THE PLOT: In Denmark of the 1920s and 1930s, after being asked to model for his painter wife in women’s stockings and shoes, Einar Wegener (Eddie Redmayne) discovers something that was almost missing from his life. Creating the alter ego Lili, Einar begins to dress and live more and more as a woman, but struggles with the emotional and physical implications of realising he is no longer comfortable as a man until he finds a doctor who will carry out groundbreaking and dangerous surgery.
THE VERDICT: ‘The Danish Girl’ is based on the life of transgender pioneer Einar who went on to live as her authentic self Lili, and is an incredibly important story. The only trouble is that this incredibly sensitive topic is not handled as carefully as it could have been, with Einar/Lili coming off more as mentally ill than someone who knows that they were not meant to live in the body they have.
Eddie Redmayne is on fantastic form as Einar/Lili, bringing curiosity and strength to the role. Redmayne is wonderfully backed up by Alicia Vikander who makes Einar’s wife Greta curious, challenging and accepting of this unheard of struggle her husband is going through. Both work well on screen together and treat the story with the seriousness that it deserves, but struggle to break through the lack lustre script and odd musical cues. The rest of the cast includes Ben Whishaw, Amber Heard, Matthias Schoenaerts and Emerald Fennell.
Lucinda Coxon’s screenplay is based on David Ebershoff’s novel about Einar’s struggle as the first person to receive any kind of gender reassignment surgery. The film gives us a rounded feel for the pretty and gentle Einar before he realises his life is not what it should be, but his crisis with gender and decision to start living as Lili comes off as mental illness, with Lili being almost unable to articulate and explain herself and her crisis. Of course the film touches on the idea that doctors told Einar his feeling that he was not a man, but a woman and their reaction was to diagnose mental illness, but for all his protestations that there is nothing wrong with him, Einar goes through with painful and unnecessary treatments anyway. Perhaps the trouble stems from the fact that Einar/Lili’s medical records were destroyed in World War II – so we don’t know if he was actually intersex, as has been rumoured – or if the well intentioned choice to make the film as accessible as possible has flattened the impact and this film that should be a discussion about what it means to be transgender, and ends up an examination of a trans woman whose wife is much more interesting than she is.
Director Tom Hooper handles the story with his customary feel for the melodramatic, which strips some of the humanity and emotion from the incredible life of Einar and his accepting, patient and supportive wife. The film keeps an emotional distance from its subject, at turns painting Einar/Lili as confident and strong, then weak and emotional but never giving the audience the feeling that we know her. At the same time, the film completely skims over the emotion felt by Einar’s wife – other than one scene – at the transition she is going through at the same time. The final half hour, which focuses on Lili’s attempt to finally physically transition to female, suffers from a lack of detail and explanation, just as the rest of the film lacked emotional detail.
In all, ‘The Danish Girl’ is a film which, at its heart, has a truly important, moving and engaging story, but this is surrounded by vapid scenes – such as Lili figuring out how she should move her hands to adequately ‘pass’ – that give no insight into the characters’ emotions, responses and understanding of being what we know now to be transgender. There is no doubt that Redmayne and Vikander’s performances are strong, but the film somehow makes transgender people invisible, even as it tells the story of the first person to transition.
RATING: 2.5/5
Review by Brogen Hayes