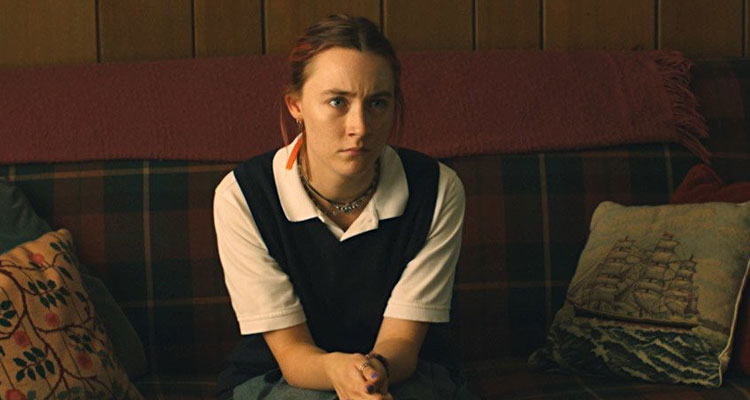 LADY BIRD (USA / 15A / 94 mins)
Directed by Greta Gerwig. Starring Saoirse Ronan, Laurie Metcalf, Tracy Letts, Lucas Hedges, Timothee Chalamet.
THE PLOT: Christine AKA Lady Bird (Saoirse Ronan) is 17 and lives in post-9/11 Sacramento, California. It may be the State Capital, but she dubs it ‘the Midwest of California’. She yearns to break free from the confines of her limited environment and move to the bright lights and big city of New York, where she hopes to attend college. Her parents Marion (Laurie Metcalf) and Larry (Tracy Letts) are polar opposites – tense and laidback respectively, but they both face difficult decisions regarding the family finances. Over the course of a few months, we follow Lady Bird as she deals with making the transition to adulthood, gaining and losing friends and the all-too-present need to connect with a boy, Danny (Lucas Hedges)…
THE VERDICT: Indie darling Greta Gerwig has fast carved out a reputation as a natural successor to Parker Posey – quirky yet accessible, old-school yet modern. As an actor and a writer, she’s created some wonderful girl-next-door characters, most notably with her offscreen beau and director Noah Baumbach. A turn to directing is a natural progression in her career, hence ‘Lady Bird’. Is it as good as all the advance word from the US has told us? Resoundingly, yes.
Sacramento-born Gerwig’s script is semi-autobiographical, so it’s to be taken with a pinch of salt. As she told Indiewire recently ‘nothing in the movie literally happened in my life, but it has a core of truth that resonates with what I know’. Whatever the origin of the story, it’s an excellent script which shows depth of character, a knowing sense of humour and attention to the growing pains of teenagers which John Hughes and Sofia Coppola have otherwise been able to successfully translate onscreen.
‘Lady Bird’ is very much a Gerwig creation, in that you can sense her directorial voice from the get-go. It’s not hard to imagine a younger Gerwig herself playing the character. She’s quirky, challenging accepted societal standards (notoriously in one particular scene) and wants a life less ordinary. Some critics have interpreted the film as being taken from Marion’s perspective, which is an intriguing viewpoint. This reviewer doesn’t quite agree, but acknowledges that Marion is an ever-present character. She wants her daughter to be the best version of herself, but has to accept that it’s time to let ‘Lady Bird’ discover the world for herself, stumbling along the way and hopefully learning from her mistakes.
She’s been good so many times before, but this is undoubtedly Ronan’s career-best performance – so far anyway. For a 23-year-old, she still has a long way to go in the industry, but she might find it hard to top this performance. She effortlessly tunes into Gerwig’s wavelength, making the character relatable, flawed, funny and with a wholly singular voice. There are many wonderful moments in the film when she just disappears into the character like any truly talented actor does. She’s well supported by veteran actor Metcalf and actor/playwright Letts, who play atypical parent roles – less of the nuggets of wisdom and more of the reality of life.
‘Lady Bird’ is a terrific and auspicious directorial debut for Gerwig. Like Coppola, she’s a strong female voice in an otherwise male-dominated sector of the industry. It’s proof enough that there should be more female directors in American cinema and more recognition for those who try to break the mould. In a year when women’s voices are rightfully growing louder and more distinct in American cinema, ‘Lady Bird’ is a resounding triumph. Sweet, funny and perceptive, it’s a coming-of-age tale that deserves all the accolades coming to it.
RATING: 4.5 / 5
Review by Gareth O’Connor

I, TONYA (USA / 15A / 119 mins)
Directed by Craig Gillespie. Starring Margot Robbie, Sebastian Stan, Allison Janney, Bobby Cannavale.
THE PLOT: Tonya Harding (Margot Robbie) did everything the hard way. It didn’t help that she had an overbearing, unsympathetic mother in LaVona (Allison Janney), who drove her to achieve great things in ice skating when she was young. LaVona even came to Tonya’s first date with Jeff (Sebastian Stan), a dim but earnest guy whom she later married. However, a pattern of physical abuse repeated itself and she had a fractious relationship with him. Then one day, Tonya’s rival / friend Nancy Kerrigan had her knee bashed in by an assailant. The spotlight is turned on Tonya straight away, with the Olympic skater forced to confront another unsympathetic audience…
THE VERDICT: ‘I, Tonya’ finally arrives on these shores, after scoring a number of awards and three Oscar nominations in recent weeks. Does it live up to the hype? Yes… and no. It very much fits the slot of the Oscar-nominated film that got lucky. In that sense, it’s a performance-driven film which otherwise masks a loosely-structured story. That’s not to say it’s a bad film by any means. It’s just that audience expectations shouldn’t be set too high for it.
There was a major media scrum over Harding in the 1990s, a sports scandal that caused shockwaves. However, she was unfairly vilified by the press after pleading guilty to hindering the prosecution of the real culprits. At least, that’s what this sympathetic portrayal of Harding is telling us. It works though and it’s hard not to be swept along with the story and feel some sympathy for her. Harding was something of an outsider, a young woman from a rough background who didn’t fit the image of sporting success that the Olympic Committee wanted to sell to the world.
Director Craig Gillespie, coming off two real-life films for Disney, has crafted a warts-and-all tribute to Harding and her battle for recognition. There’s no doubting her talent – she was a complete natural on the ice. The film flits over the course of decades and the key characters in Harding’s story. Gillespie tries to cover too much here, with the result that the narrative structure is loose and lacking focus. Zeroing in more on ‘the incident’ would have helped, as well as giving a proper voice to Kerrigan.
However, the flawless performances make up for this. Robbie once again loses herself in an unflattering character, which pushes her considerable range and taps into some of that anarchic Harley Quinn vibe. There’s no faulting Janney’s award-winning performance either, by turns funny and kick-in-the-nuts blunt. Even Stan’s dim-bulb husband comes across as goofy and likeable, while keeping his questionable behaviour in check. There’s a lot to enjoy here, as long as you don’t pick too much at the faults. ‘I, Tonya’ wobbles occasionally, but it’s worth seeing for the performances alone.
RATING: 3 / 5
Review by Gareth O’Connor