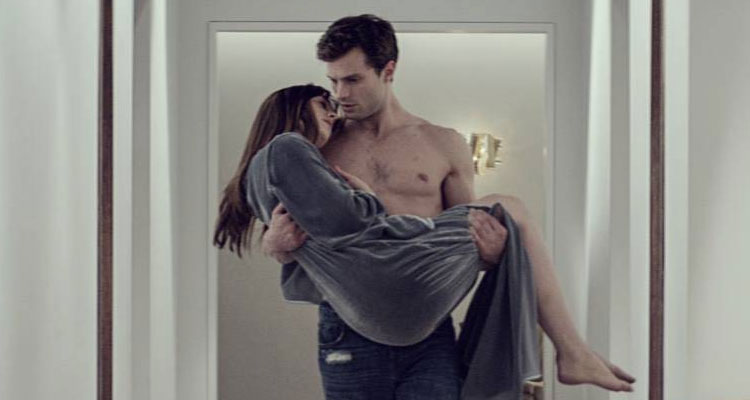 We review this week’s new cinema releases, including the highly anticipated FIFTY SHADES OF GREY…

FIFTY SHADES OF GREY (USA/18/125mins)
Directed by Sam Taylor-Johnson. Starring Dakota Johnson, Jamie Dornan, Jennifer Ehle, Eloise Mumford, Victor Rasuk, Luke Grimes, Marcia Gay Harden, Rita Ora, Max Martini.
THE PLOT: In her Laura Ashley hand-me-downs and practical duffel coat, 21-year-old English Lit student Anatasia Steele (Johnson) looks somewhat out of place in the penthouse office of billionaire tycoon Sebastian Grey (Dornan), the former interviewing the latter as a last minute favour when her bubbly flatmate Kate (Mumford) falls sick. Almost immediately, the mind games start, the notorious bachelor teasing the lip-biting Ana about his need for control. Christian wants to do some very unchristian things to Ana, and it doesn’t take long for the expensive gifts to arrive.
The tease begins. He doesn’t do the girlfriend thing. She, so far, hasn’t done anything. And Ana soon realises that a relationship with Sebastian Grey comes with ropes attached. So, as the very dirty dancing begins, our little Sinderella is never truly comfortable with being live-in weekend lover no.16 – especially with Sebastian pushing her to sign a detailed contract over what can and cannot happen in his leather-bound play-room.
THE VERDICT: Basically S&M for the M&S brigade, Fifty Shades Of Grey is largely soft porn without the money shots, but with plenty of the predictable set-ups. This could have been written by Edna Krabappel.
It’s Bridget Jones meets American Psycho, it’s In The Realm Of The Senses reimagined by Andy McNab. It’s a film that sees worthy, horny director Sam Taylor-Johnson trying to mould E.L. James’ bland words into Girl With The Dragon Tattoo, but, thanks perhaps to the author’s constant presence on set, we’ve ended up with Girl With The Tramp Stamp.
Then again, what do you expect when the film’s source is one of the worst-reviewed novels in recent years? It may have sold over 100 million copies since its release in 2011, but Fifty Shades Of Grey is an erotic novel written by, at heart, Dan Brown in crotchless knickers.
It will, of course, do monster business at the box-office this weekend, fading fast once the hen party audience have had their fill. There’ll be more giggles than swoons though.
No Secretary, no Shame, the only truly shocking thing about Fifty Shades Of Grey is that it expects us to believe that there’s a virgin in Seattle. Still, at least it has inspired me to finally write my own novel, and I’m going straight for the commercial kill. It’s all about the owner of Supervalu seducing one of his checkout girls, making her grab him by the meat department. Look out for Unexpected Item In The Baggage Area at a bookshop near you this summer…
RATING: 1/5
Review by Paul Byrne

LOVE IS STRANGE (USA | France | Brazil | Greece/TBC/94mins)
Directed by Ira Sachs. Starring Alfred Molina, John Lithgow, Marisa Tomei
THE PLOT: Having been together for decades, George (Alfred Molina) and George (John Lithgow) finally get married. Not long afterwards, George is unceremoniously fired from his teaching job at a Christian school, and the newlyweds find themselves having to sell their home and couch surf with friends and family. Of course, this cannot be a permanent solution, but it takes a toll on all involved.
THE VERDICT: LOVE IS STRANGE is one of those quiet little affecting movies, one that is not all song and dance, but about the characters and their world. Alfred Molina and John Lithgow are simply wonderful in their roles as the newly wed septuagenarians; watching them, it is easy to believe that these men know one another intimately, have seen one another at their best and at their worst, and love each other unconditionally. The chemistry is gentle, yet believable, and their performances are nuanced, warm and ultimately, heartbreaking in their sincerity.
The rest of the cast is made up of Marisa Tomei, Cheyenne Jackson, Charlie Tahan and Darren E. Burrows. Each is skilfully directed by Ira Sachs, and makes their performance believable and relatable. Speaking of Sachs’ direction, there is barely a moment that feels unauthentic, so well does he weave the story together. Much of the action and pivotal moments take place off screen, which allows the characters to digest, deal with and accept events alongside the audience. There are times, however, when it would have been less frustrating for the audience to have questions answered on screen, but there is a feel of authenticity created by having these moments happen outside the world of the film; life changing moments are often experienced alone, and it is in talking about them, telling people about them or simply carrying on that character is formed.
The story, written by Sachs and Mauricio Zacharias, is painfully simple, but it is in this simplicity that the genius of the film lies; this is not a tale about marriages, friendships or relationships ending, it is simply an examination of the everyday frustrations that happen, and the way that the characters in the film deal with them. Christos Voudouris’ cinematography makes New York beautiful and light, a telling contrast against the emotional struggles at the heart of the film.
In all, LOVE IS STRANGE is a warm and heartbreaking look at what happens to people when things don’t go as planned. Molina and Lithgow are outstanding as the central couple, and the supporting cast carry the tone and feel of the film well. That said, however, leaving important events to goo unseen is both a weakness, and one of the film’s greatest strengths.
RATING: 4/5
Review by Brogen Hayes