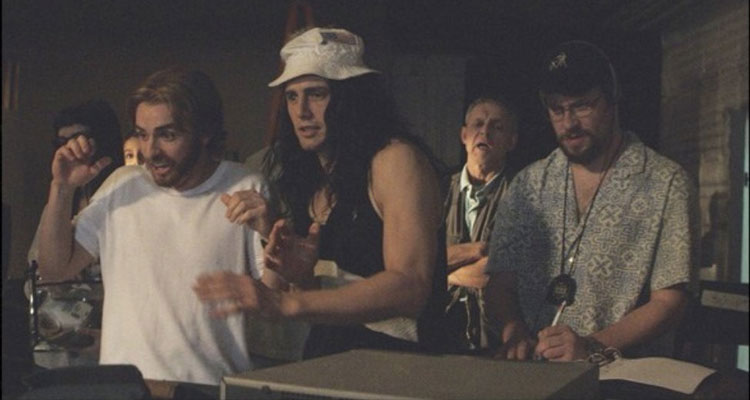 THE DISASTER ARTIST (USA / 15A / 104 mins)
Directed by James Franco. Starring James Franco, Dave Franco, Seth Rogen, Alison Brie, Josh Hutcherson, Zac Efron.
THE PLOT: San Francisco, 1998. Wannabe actor Greg (Dave Franco) meets the flamboyant, out-there Tommy (James Franco) at an acting class. Tommy has his own idea of Method Acting, being expressive and true to life – well, his life anyway. The two become firm friends and decide that it’s time to hit the bigtime and move to Los Angeles, where nearly everyone is an actor. While Tommy is faced with constant rejection at auditions, Greg has potential. It’s at this point that Tommy decides to throw caution to the wind and make his own movie with Greg. With apparently limitless funds and constant optimism, they set out to make The Room. It’s not an easy shoot, with Tommy clashing with script supervisor Sandy (Seth Rogen). This apparently bad movie might be good after all…
THE VERDICT: ‘The Disaster Artist’ is an affectionate tribute to the unfailing spirit of Tommy Wiseau, the creator of The Room – what’s been called the worst film of all time. He’s a spiritual successor to another Hollywood dreamer/loser, Edward D. Wood Jr, whose passion for movies was matched only by his ineptitude at making them. You can certainly see the parallels, but Wiseau is a whole other kettle of fish – or planet as he once refers to.
Beaming down to Planet Tommy for 104 minutes is a joy from start to finish. It’s a singular portrait of a highly eccentric but charming character, driven by his spontaneous attitude to life – just go with the flow and do it. Those early scenes build up the budding bromance between Tommy and Greg, even hinting at a Holmes / Watson-style jealousy when Amber (Alison Brie) enters Greg’s life. But it’s in the later scenes when The Room starts shooting that the laughs erupt like lava. And they keep on coming, to make this possibly the funniest – and most fun – film of the year.
‘The Disaster Artist’ is undoubtedly a career high for the Brothers Franco. While they’ve had their own various successes and failures in the industry, they’ve hit upon something unique here that taps into their ability to be both funny and sympathetic at the same time. They’ve never been so good at being bad. Actor/director James Franco has painstakingly re-created unintentionally hysterical scenes from the film – look just before the end credits for a fascinating comparison. The two brothers play off each brilliantly too, with James immersing himself fully into the character (with the aid of some prosthetics), while Dave gets the slightly dim bulb aspect of Greg just right.
Tommy Wiseau was a loser who never stopped dreaming, even when reality came crashing in. Although it only played in one cinema, The Room went on to become a cult hit on the midnight movie circuit and is now ripe for rediscovery. For a film about a loser, ‘The Disaster Artist’ is nothing but a winner. It achieves a near-perfect balance of humour, heart and respect for its characters. We laugh at them, but they’re laughing at themselves too. It’s a rib-tickling triumph for all concerned, but particularly for the multi-talented James Franco. Stay to the very end of the credits for an extra treat.
RATING: 4.5 / 5
Review by Gareth O’Connor

BLADE OF THE IMMORTAL (Japan | UK/16/140mins)
Directed by Takashi Miike. Starring Takuya Kimura, Hana Sugisaki, Sôta Fukushi, Hayato Ichihara, Erika Toda.
THE PLOT: Samurai Manji (Takuya Kimura) finds himself on the run with his sister after he turns on his superior. Mortally wounded in a legendary battle that leaves his sister dead, Manji is cursed with immortality and decides the only way for him to save his soul. Fifty years later Manjii is sought out by a young girl named Rin (Hana Sugisaki), whose family was brutally murdered by ruthless warrior Anotsu (Sôta Fukushi).
THE VERDICT: ‘Blade of the Immortal’ marks director Takashi Miike’s 100th film behind the camera, and is based on a Manga of the same name. The story is a big, old-fashioned warrior revenge flick, but there are times when the 140 minute running time feels all too evident.
The lead cast, Takuya Kimura, Hana Sugisaki and Sôta Fukushi, do well with their roles, showing tenacity, ferocity and strength throughout the film, and making their characters come to life with motivations that feel real and rounded. Manji, played by Takuya Kimura, perhaps goes through the strongest evolution throughout the film, and he is a character that is frustrating at times, but one who the audience finds themselves rooting for.
Tetsuya Oishi’s screenplay, based on Hiroaki Samura’s Manga, creates a world full of heightened characters that feel as though they belong in the world of the film. The film struggles, however, in getting between the glorious and violent fight sequences that punctuate the film. The transitions between the fights are the parts of the film that feel drawn out and slow, and as though the film is dragging its heels, and just waiting for another conflict to happen, just to kick the pacing up as a notch. As well as this, there are times when the character of Manji is sketched strangely, and alternates between ferocious and defeated, leaving it hard for the audience to root for him, even though we want to.
As director, Takashi Miike makes sure that ‘Blade of the Immortal’ is beautiful and striking throughout, and does not sky away from bloody violence, but there are times when it feels as though he struggles in making the overall arc of the story truly engaging and well paced. That said, everything comes together in the end, with old scores and new ones being settled on the battlefield.
In all, ‘Blade of the Immortal’ is a beautifully shot, but frustratingly paced film. Everything comes together by the final act, but the road that the audience travels over the 140 minute running time sometimes feels as though it is going nowhere. The overall feel is rewarding, but there are times when ‘Blade of the Immortal’ feels like a slog, rather than an adventure.
RATING: 3.5/5
Review by Brogen Hayes

BETTER WATCH OUT (Australia / USA / 16 / 89 mins)
Directed by Chris Peckover. Starring Olivia DeJonge, Levi Miller, Ed Oxenbould, Virginia Madsen, Patrick Warburton.
THE PLOT: It’s Christmas in suburbia and average American parents Deandra (Virginia Madsen) and Robert (Patrick Warburton) are going out for the evening. Their sweet, naïve 12-year-old son Luke (Levi Miller) is staying behind, to be looked after by his attractive, older babysitter Ashley (Olivia DeJonge). Luke has a crush on her, a fact that he shares with friend Garrett (Ed Oxenbould). He plans to make his move, but this is put on ice when a masked stranger comes prowling around the house. He valiantly tries to protect her, but all is not what it seems…
THE VERDICT: Given Universal’s long, distinguished heritage of horror, they have a keen eye for making smart genre films with an edge. A good example of this was 2015’s ‘Krampus’, a delightfully twisted antidote to saccharine Christmas family films. This year’s Christmas present from the studio is ‘Better Watch Out’, a deliciously subversive slice of suburban paranoia. It’s a Jack-In-The-Box treat that springs forth so many surprises and character turns that it immediately marks itself out from the average, typically predictable horror fare.
It’s best not to know too much about the film going into it, as it’s more enjoyable that way. Ostensibly, it’s a home invasion film that references Home Alone at one point, before turning that on its head. This is not a conventional horror film – it may look like it at first, but then the safe zone between the filmmakers and the audience is breached. Then we’re into more unpredictable, Scream-like territory where anything goes. The script, by Zack Kahn and director Chris Peckover, takes great care to establish that conventionality early on, with Luke’s growing pains and longing for some sort of recognition from an older girl all too relatable. It’s a brilliant script, punctuated by a healthy dose of wicked, well-observed teenage humour.
The young actors rise to the challenge of the physically demanding script – you may recognise DeJonge and Oxenbould from another Universal horror, M. Night Shyamalan’s The Visit. They nail the characters and their behaviour patterns so well that the character turns are credible and watertight. With only one other feature credit to his name, Peckover directs with confidence and a touch of visual style. He turns the cheery domestic environment of Christmas into something of a nightmare, where escape isn’t so easy. Better watch out for ‘Better Watch Out’. It creeps up on you and delivers laughs, chills and thrills along with a Christmas cracker of a closing shot. Undoubtedly one of the year’s most original and subversive horrors.
RATING: 4 / 5
Review by Gareth O’Connor