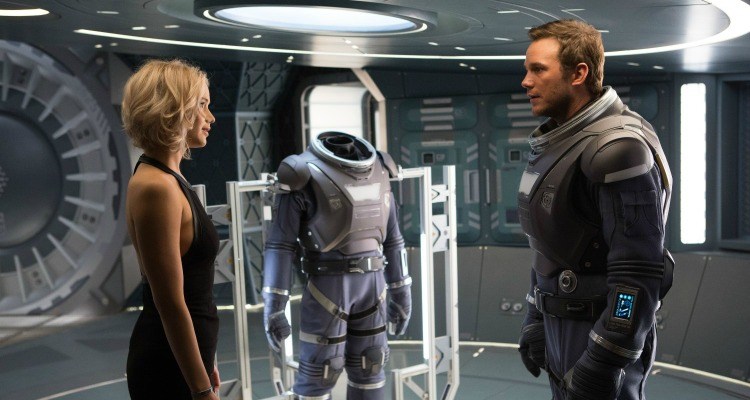 PASSENGERS (USA/12A/116mins)
Directed by Morten Tyldum. Starring Jennifer Lawrence, Chris Pratt, Andy Garcia, Laurence Fishburne, Michael Sheen
THE PLOT: Thirty years into a 120 year voyage from Earth to the newly colonised planet Homestead II, Jim (Chris Pratt) finds himself awoken from hibernation and alone on the spaceship The Avalon. After a year of spending time with Arthur the Android (Michael Sheen) and playing all the games available to him on the ship, not to mention trying to get answers to why he has been awoken, he faces an impossible dilemma.
THE VERDICT: After years in development hell, and almost 10 years on the Blacklist of most liked scripts, ‘Passengers’ has finally made its way to the big screen. Originally starring Keanu Reeves and Reese Witherspoon – among others – ‘Passengers’ is directed by Morten Tyldum, who previously brought us The Imitation Game and Headhunters, and is not quite the deep space adventure we thought it may have been.
Chris Pratt stars as Jim, an engineer travelling to Homestead II to build a new home for himself, quite literally. There is a great opportunity for Pratt to explore the toll that absolute solitude can take on a person, but he never truly gets a chance to do so. Jim is likeable, but this then poses problems of its own, since he is faced with an ethical and moral dilemma, that does not seem to trouble him all that much. Jennifer Lawrence plays Aurora, the second of the two passengers to be awoken aboard the Avalon. A writer from new York, Aurora has very different reasons for leaving her life behind. Lawrence has more emotion to play with throughout ‘Passengers’, but her changes in loyalty and switches in emotion come rather too fast for the character to feel as though she has truly thought them through. Laurence Fishburne has a small role as a crew member, Michael Sheen is charming and warm as a bar tending robot, and Andy Garcia has a blink-and-you-miss-it cameo toward the end of the film.
Screenwriter Jon Spaihts has had a mottled career to date; he brought us the flawed and troublesome films The Darkest Hour and Prometheus, but also penned the recent Doctor Strange for Marvel. ‘Passengers’ has a muddled and troublesome script at the best of times, and this comes down to two things; the moral and ethical choices the characters make, and the lack of time given to actually tell the audience about these people, and flesh them out on screen. There are interesting questions brought up in ‘Passengers’, but these are rarely answered, and it feels as though both the romance, and the set piece in the final act of the film are tacked on for the sake of giving the film a way to end.
As director Morten Tyldum does well with the quieter scenes in the film, and plays up the chemistry between Lawrence and Pratt, making them infinitely watchable and likeable on screen. It is only when certain decisions are made throughout the film that doubts begin to niggle, and characters seem to change their mind with little indication as to why. As well as this, thin characters only fleshed out by quirks and charm may be watchable, but they end up feeling unsatisfying, as does ‘Passengers’’ plot hole ridden ending.
In all, ‘Passengers’ had the potential to be something great, but not enough time is given to explore the emotional and mental impact of waking up 90 years too early and knowing your days could be played out alone in space. Even though Lawrence and Pratt are great together, Pratt’s lack of dramatic chops often shows, and problems with character development means that ‘Passengers’ ultimately sinks, when it could have soared.
RATING: 3/5
Review by Brogen Hayes

BALLERINA (France | Canada/G/89mins)
Directed by Eric Summer and Éric Warin. Starring Elle Fanning, Dane DeHaan, Maddie Ziegler, Carly Rae Jepsen, Shoshana Sperling
THE PLOT: Félicie (Elle Fanning) has always wanted to be a dancer, but there are few opportunities for her to pursue her passion since she lives in an orphanage in rural France. When she and her friend Victor (Dane DeHaan) escape to Paris, Félicie pretends to be someone else so she can become a pupil at the famed Grand Opera House.
THE VERDICT: ‘Ballerina’ is a cute film aimed at little girls who want to dance. The casting of the ‘Dance Mom’s and Sia music video star Maddie Ziegler as Camille ensures that those with a passion for performance will find their way to the cinema.
Elle Fanning, Dane DeHaan, Maddie Ziegler and Carly Rae Jepsen do fine in their roles as Félicie, Victor, Camille and Odette respectively, but the rest of the voice cast struggle to make their characters emote properly, leaving the film feeling rather dry.
Carol Noble, Eric Summer and Laurent Zeitoun’s screenplay errs on the side of the familiar, and amps up the villainy unnecessarily with Camille and her mother, but although it feels as though we have seen this film before, there is something endearing about the plucky Félicie and her friends. The film could have played with the ideas of gender and expression slightly better than it does, but making the safe choice is understandable when there is an easily built in audience for Ballerina.
Directors Eric Summer and Éric Warin make ‘Ballerina’ a fun affair, although there could have been a little more emotion in the voices of some of the characters, and the bathroom humour that crops up in the film feels rather immature and unnecessary. The music from the film is deliberately anachronistic, and while it works at times, the clash of time periods is often jarring. The film is beautifully animated however, and the streets of Paris look warm and inviting throughout the film.
In all, ‘Ballerina’ is a film aimed squarely at little girls with a passion for dance. Adults in the audience are unlikely to find anything new or exciting in Ballerina, but there is a warm heart to the film, although the story is rather familiar and some of the voice cast could have done with better direction.
RATING: 3/5
Review by Brogen Hayes

THE EAGLE HUNTRESS (UK|Mongolia|USA/TBC/87mins)
Directed by Otto Bell. Starring Aisholpan Nurgaiv, Daisy Ridley (narration).
THE PLOT: Deep in the Altai Mountains of Mongolia, the nomads have hunted for food for a millennium with the help of well-trained golden eagles. These men become eagle hunters, respected and admired by their people. It is a calling, passed down from father to son, from generation to generation. However, that is all set to change. Aisholpan Nurgaiv, a rosy-cheeked 13-year-old girl, wants to be the first eagle huntress. Her father encourages her, believing in equality between males and females. Why should both gender and age be a barrier to anyone’s dreams? The nomad elders have their doubts, expressing concerns about Aisholpan’s strength and ability. However, she asserts that girls can do anything boys can. So, she sets out to capture and train an eaglet and then compete, unannounced, as the first ever huntress in the annual Eagle Festival…
THE VERDICT: Executive produced by Ridley and one Morgan Spurlock, ‘The Eagle Huntress’ is the feature documentary debut of New Yorker Otto Bell. It apparently took him his life savings of $80,000 to make, but he was determined that his debut would be about Aisholpan Nurgaiv. His belief in his subject and her ability with eagles is well-founded, as she becomes the heart and soul of this inspiring charmer. Aisholpan challenges accepted traditions and patriarchal attitudes about male / female roles in her world. Why should boys be the only ones to go out and hunt? There is a modest quality to Aisholpan, as she quietly and confidently breaks down those old-fashioned attitudes, first by scaling a dangerous cliff to capture an eaglet. Then she trains it and brings it to the Eagle Festival, where she breaks records against older and more experienced male eagle hunters. It seems that an eaglet responds more intuitively to a huntress.
Mongolia has featured in documentaries before, like in ‘The Cave Of The Yellow’ Dog, but rarely has it looked so wild and beautiful. Using drone cameras, cinematographer Simon Niblett swoops in and out of the vast landscapes like an eagle. It is a film of the epic and the intimate, both of which are balanced out by Ridley’s skilful narration. Thankfully, it is not too intrusive. Instead, Bell lets his subject and her family do most of the talking, with Ridley filling in the background colour. Aisholpan is quite a subject though. She is an ordinary girl who likes girly things like nail polish and goes to school during the week, where she is a straight-A student. She dreams of being a doctor, but after seeing this film there can be no doubt that she is an Eagle Huntress.
As the Sia song that plays out over the end credits suggests, you can do anything. That is the key message of this highly entertaining, engaging and inspiring documentary about the universal power of dreams, hope and youthful ambition. Barriers can be broken and that is something that we can all learn from, whether young or old, male or female.
RATING: 4/5
Review by Gareth O’Connor