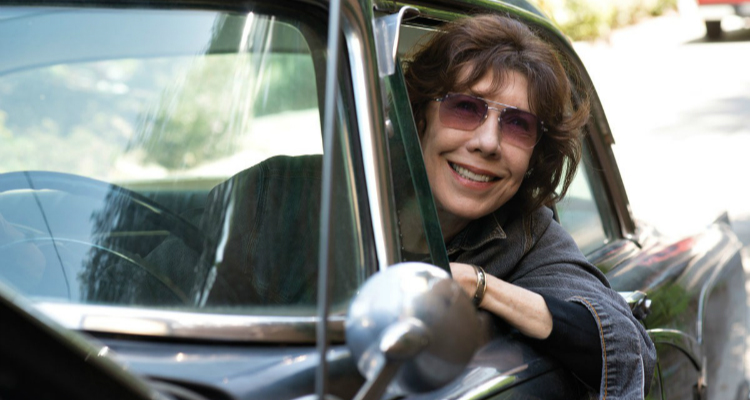 GRANDMA (USA/16/19mins)
Directed by Paul Weitz. Starring Lily Tomlin, Jedy greer, Marcia Gay Harden, Julia Garner, Laverne Cox
THE PLOT: After her girlfriend of four months breaks up with her, Elle’s (Lily Tomlin) granddaughter Sage (Julia Garner) turns up at her door. Still in school and facing an unwanted pregnancy, Sage is looking for money for an abortion, money that Elle simply doesn’t have, after making wind chimes from her credit cards. Elle sets out to help her granddaughter, with a little help from old friends and acquaintances, but the path doesn’t always run smoothly.
THE VERDICT: It is hard to believe that not only is ‘Grandma’ Lily Tomlin’s first lead role in a movie in 27 years – her last was in ‘Big Business’ in 1988 – and that this witty, cutting and honest film is brought to us by Paul Weitz, whose first film was the teen comedy ‘American Pie’.
‘Grandma’ lives and dies on the shoulders of Lily Tomlin as Elle, and she is on wonderful, acerbic, caring and funny form as the lead character. Throughout the film it becomes clear that years of hardship and loss have made Elle a tough woman, but she still has layers of kindness under the surface. Tomlin’s timing – both comedic and dramatic – is wonderful, and she is smart, witty and just a little bit cruel. Julia Garner does well as Elle’s young granddaughter, and doesn’t allow Tomlin’s experience and presence to force her to the background. Marcia Gay Harden turns up as an angry and overwrought mother, Laverne Cox plays a kindly tattoo artist, Judy Greer plays Elle’s recent ex, who doesn’t stand for her shenanigans and Sam Elliott finally gets to play an emotive character for the first time in what feels like years.
Paul Weitz’s screenplay is smart and witty, but it is also incredibly cleverly constructed, allowing the audience to understand the characters, even if we only see them for a moment, and for vital information about Elle and her past to be revealed through conversation, with the audience left to fill in some of the blanks themselves, instead of through clunky exposition. Weitz’s story takes a look at the life of one woman in one day, but reveals much about Elle, the time she grew up in, and the loves and losses she has had along the way.
As director, Weitz allows Tomlin to be both agitator and commentator, and the one around whom the story revolves. The film is incredibly well paced, with the end of the film coming far too soon in this 79 minute movie. The audience could happily have stayed with Elle for much longer, but it is the mark of a well made movie that it does not outstay its welcome.
In all, ‘Grandma’ is funny, tragic and wonderful, with Lily Tomlin’s performance leaving us all wondering just why she has not had a leading role in so long. Weitz’s script is witty and well observed, and the supporting cast are strong in their small roles.
RATING: 5/5
Review by Brogen Hayes

BY THE SEA (USA|France/15A/12mins)
Directed by Angelina Jolie Pitt. Starring Angelina Jolie Pitt, Brad Pitt, Melanie Laurent, Melvil Poupaud, Niels Arestrup
THE PLOT: Vanessa (Angelina Jolie Pitt) and her husband of 14 years Roland (Brad Pitt) arrive in a small French seaside town. Roland, a writer, is searching for inspiration, but mostly spends his days drinking, Vanessa spends her time cooped up in their hotel and popping pills. When a young couple takes the room next door, and Vanessa finds a way to spy on them, the older couple suddenly find a way to spend time together, and a way to finally talk about their problems.
THE VERDICT: First things first; ‘By the Sea’ can be boiled down to just this; two hours of horrible people doing horrible things to one another. It is not that Angelina Jolie Pitt is a bad director per se – last year’s Unforgiven had issues, but as a solid effort – but ‘By the Sea’ is a slow moving, underwritten domestic strife drama, in which the characters learn very little.
In an interview with The Hollywood Reporter, Angelina Jolie Pitt stated that the idea for ‘By the Sea’ came from the grief of her mother dying, and the love she had for movies from the 1970s. This is a noble gesture on the director’s part, but her screenplay for the film is not one that lives up to this noble inspiration. Vanessa is drawn as caustic and nasty, shunning even friendly chatter from those who encounter her; Roland is little more than an unhappy alcoholic and the rest of the characters are two dimensional and thin. Melanie Laurent tries her best with what she is given, as does Melvil Poupaud as Francois, but the standout performance is from Niels Arestrup as barkeeper Michel, who brings genuine emotion and wisdom to his character. Jolie Pitt and Pitt, for their parts, struggle to make their vile and cruel characters interesting and, for the most part, fail.
As director, Jolie Pitt brings no urgency to the film, allowing it to crawl through its 2 hour running time. Much time is spent watching characters look at one another and, when the big change comes with the discovery that Roland and Vanessa can spuy on a young couple having sex, the film turns from dull to creepy and dull. There seems to be no reason for these characters to do what they do – spying certainly doesn’t help their sex life or their emotional relationship with one another, in fact, it seems to make it even worse. Nudity abounds in the film, for no apparent reason, and the characters seem to learn nothing from their cruelty to one another, meaning the story has no resolution.
In all, ‘By the Sea’ is a two-hour journey through the lives of two people who hate each other, and are willing to be nasty to each other to entertain themselves. The trouble is, that this is not all that entertaining to watch. The cast struggle to make their characters relatable and the screenplay makes a big song and dance about revealing secrets; all of which the audience will see coming a mile off. For all its cinematic beauty, ‘By the Sea’ is as languid as its characters, and never truly goes anywhere.
RATING: 1/5
Review by Brogen Hayes

PEGGY GUGGENHEIM: ART ADDICT (USA|UK|Italy/TBC/96mins)
Directed by Lisa Immordino Vreeland
THE PLOT: Director Lisa Immordino Vreeland takes a look back at the life of Peggy Guggenheim; daughter of the Guggenheim empire and self confessed enfant terrible who began her own art collection after meeting, and becoming romantically involved with, some of the greatest artists of the 20th century. Guggenheim’s story is told with the help of newly discovered interview tapes with the art supporter, her biographers and admirers.
THE VERDICT: There is very little doubt that Peggy Guggenheim lived an extraordinary and tragic life; her father died on the Titanic when she was a small child and her sister Hazel’s children died when they fell from a rooftop. On the other side of the coin, Peggy Guggenheim became a hugely respected and beloved art appreciator, exhibitor and dealer throughout her life, and although many might say that she was not the most beautiful of women, had many high profile and intense love affairs throughput her life.
Lisa Immordino Vreeland tries her best to make Guggenheim’s extraordinary life fit within the confines of the film, but although this is a fascinating story of a woman who blazed her own trail through the art world, there is simply so much going on that the film often feels cluttered and rather manic. Interviews with biographer Jacqueline B Weld, Francine Pose, John Richardson, Edmund White and Calvin Thomas – among others – flesh out the story through their own perspectives as art historians and authors, but also serve to fill the film with voices and opinions that somehow detract from Guggenheim’s remarkable life. Add to this an interview with Guggenheim herself, and the spotlight of the story swinging from her personal to professional life and back again, and the film loses focus.
In all, however, ‘Peggy Guggenheim: Art Addict’ has a fascinating at its heart; a woman who discovered Jackson Pollack and had a profound impact on the art world. The trouble is that by trying to fit so much into the film, the focus is a little scattered and there is simply too much information to be fully absorbed.
RATING: 3/5
Review by Brogen Hayes