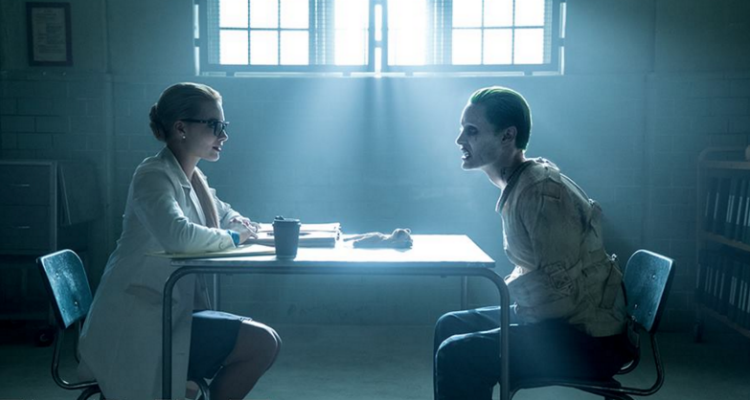 SUICIDE SQUAD (USA/15A/130mins)
Directed by David Ayer. Starring Margot Robbie, Will Smith, Jai Courtney, Viola Davis, Jared Leto, Joel Kinnaman, Cara Delevigne.
THE PLOT: “The world changed when Superman flew across the sky, and it changed again when he didn’t”, so says Amanda Waller (Viola Davis), as she gathers together a band of villains including Harley Quinn (Margot Robbie), hitman Deadshot (Will Smith), Captain Boomerang (Jai Courtney) and Killer Croc (Adewale Akinnuoye-Agbaje) to form Taskforce X. To incentivise the bad guys to work together, they are offered clemency or death, and unsurprisingly, they choose to live, but just how cooperative they are going to be remains to be seen, even when faced with a worse evil than they.
THE VERDICT: After months of trailers, TV spots and a frank overuse of the song “Ballroom Blitz”, ‘Suicide Squad’ is finally released in cinemas this week. Following on from the dark and muddled ‘Batman Vs Superman: Dawn of Justice’, ‘Suicide Squad’ promised to be a fun, funny and over the top action movie, and set up a whole new franchise to boot. The trouble is that while ‘Suicide Squad’ is a marked improvement over ‘Batman Vs Superman’, there is a feeling of familiarity about the whole thing, and that’s nothing to do with the characters.
Margot Robbie leads the cast as Harley Quinn, former psychiatrist turned paramour of The Joker (Jared Leto), and while she does well with what she is given, there is the feeling that Quinn is not as crazy as the dialogue would have us believe, since there are times when the character seems more mischievous than mad. Will Smith takes on the role of Deadshot, a hitman for hire whose only weak spot is for his young daughter. Smith is fine, but again, there is the feeling that Deadshot is less a villain and more a man obsessed with making money and a family bond with his daughter. Adewale Akinnuoye-Agbaje does well with the physicality of Killer Croc, but he, Jai Courtney and Jay Hernandez as Diablo have significantly less to do. Elsewhere, Viola Davis makes Amanda Waller tough, no-nonsense and often frightening in her coldness, Joel Kinnaman does fine with Rick Flag and Cara Delevigne gets the physicality of June Moon / Enchantress down, but once again does not have a lot to do. Jared Leto takes on the role of The Joker, and although his appearance has been long awaited, he does not get a lot of time to show off his version of the Clown Prince of Crime in the movie, but there is the feeling that this is a new cinematic version of The Joker. Just as the audience begins to warm to this new version of the character, however, he is taken off screen and out of the action.
As screenwriter, it really feels as though David Ayer is trying to take a page out of the uber successful ‘Guardians of the Galaxy’ book, and while there is nothing inherently wrong with this, it does give the film a strong feeling of familiarity. As well as this, the film is not quite as funny as it should be; Margot Robbie brings a lot of laughs as Harley Quinn, and Jai Courtney has some nice moments, but the comedy is left to just two of the crew, which means it feels patchy and uneven. The set up of all these new characters feels rushed at times – especially since we do not get a lot of time with some of them – and the overall story feels rather small stakes.
As director, David Ayer has made each of the characters strong in their physicality, but obviously spent more time on Harley and Deadshot than the rest of the team. The set pieces are fun but, as with ‘Batman Vs Superman’, are starved of light, making them feel a little muddled at times, and although the pacing works well, the feeling of familiarity throughout the film is just compounded by the admittedly great retro soundtrack, which includes Bohemian Rhapsody, Sympathy for the Devil, Super Freak and Spirit in the Sky. The use of these songs also makes the film feel episodic at times, as though we are watching a selection of music videos rather than a coherent film.
In all, ‘Suicide Squad’ is a vast improvement on the dark and depressing ‘Batman Vs Superman: Dawn of Justice’, but in trying to be fun and playful, begins to feel familiar and much like any comic book film to date. Margot Robbie stands out as Harley Quinn, and it will be interesting to see where Jared Leto takes his version of The Joker, but while there is fun to be had with ‘Suicide Squad’, it ends up feeling familiar and too much as though it is trying to be fun and funny without a strong enough script.
RATING: 3/5
Review by Brogen Hayes

BOBBY SANDS: 66 DAYS (12A/105mins)
Directed by Brendan J. Byrne.
THE PLOT: Documentary filmmaker Brendan J. Byrne examines the 66 days in 1981 when Bobby Sands went on hunger strike in a Northern Irish prison, for the right to be recognised as a political prisoner, rather than a criminal.
THE VERDICT: Although the story of Bobby Sands, his decision to go on hunger strike for his beliefs, and the fact that he was elected as an MP while on his prison deathbed is a story familiar to those of us on the island of Ireland, there are angles of the story that have been obscured or hidden due to the passage of time, and Brendan J. Byrne’s film takes a closer look at a situation that was not only politically charged, but filled with emotion on both sides of the debate.
‘Bobby Sands: 66 Days’ is narrated by Sands himself; parts of his diary are used to explain the situation that he was in at the start of his drastic decision to go on hunger strike, as well as the more personal elements of the story, and just what was going through Sands’ mind throughout his ordeal. This is then mixed with interviews with childhood friends and those who were in prison with Sands, and archive news footage from Northern Ireland in 1981. What emerges is a highly complicated story, with conflicts and emotion on either side, and the truth that while neither side of this conflict was wrong, neither one was always right either.
Director Brendan J. Byrne has coaxed wonderful, candid and honest interviews from those that agreed to be in the film, including Fintan O’Toole and Gerry Adams, and it is they – along with Sands’ own words – that tell the tale of the hunger strike. As well as this, there is enough context and historical information given about the time in Northern Irish history for audiences to understand the issues in 1981 – although these are often simplified for the sake of efficiency. Byrne’s strongest point in telling the story of Bobby Sands is not only humanising the man who became a martyr and nothing more than a man who decided to starve himself to death for his beliefs, but also in giving a wider context to not only the international influences on the IRA at the time, but those at home that inspired their actions, including the leaders of the 1916 Rising, and former Lord Mayor of Cork, Terence McSwiney who died after 74 days on hunger strike in 1920.
What becomes abundantly clear throughout ‘Bobby Sands: 66 Days’, is not only the youth and determination of Sands to finish what he started, but also the fact that there were no simple answers in Northern Ireland at the time. Audience sympathy often switches sides throughout the film, and this is down to the skill of Byrne is telling the story from as balanced a viewpoint as possible.
In all, ‘Bobby Sands: 66’ Days is the story of a man who died for his beliefs. The film is well made and compellingly put together, but also reminds audiences that since the narrative cannot be wrapped up in a neat little bow, there really were no simple answers in Northern Ireland at the time, and the peace we now have on the island of Ireland was hard won.
RATING: 4/5
Review by Brogen Hayes

SWEET BEAN (Japan | France | Germany/TBC/113mins)
Directed by Naomi Kawase. Starring Kirin Kiki, Masatoshi Nagase, Kyara Uchida, Miki Mizuno, Miu Takeuchi.
THE PLOT: Naomi Kawase’s film focuses on a Doraki stand – sweet bean paste (an) sandwiched between two pancakes. Sentaro (Nagase Masatoshi) runs the stand and has always bought the paste in bulk. When an elderly woman shows up at the stand looking for work and offering her recipe for an, the two find they have a lot more in common than they first thought.
THE PLOT: At almost 2 hours long, ‘Sweet Bean’ is not a film that gets to its point quickly, but it is a sweet tale of three people coming together under the most unlikely circumstances, and finding common ground. Nagase Masatoshi plays the man who runs the Doraki stand, and it is clear that this is a man who has removed himself from society intentionally, and is tortured by the events that drove him to do so. Kiki Kirin plays Tokue, the woman who mysteriously offers her recipe for the sweet paste. Kirin makes the character seem like a simpleton at first, but it becomes clear, as time goes on, that she simply looks at the world differently than her surly boss.
Director Naomi Kawase adapted the screenplay from Durian Sukegawa’s novel, and although the message of the film is sweet, and it is a pleasure to spend time with the characters as they get closer, and heir loyalty deepens, there are times when cooking as metaphor for life – in general, slow down and pay attention – takes too much of the film’s time, leaving the pacing to grind to a halt. As well as this, the intention of the film is relatively clear, and having Kirin hammer the point home with a voiceover at the end feels a little like overkill.
Kawase, as director, has created a film about friendship and acceptance, while also examining the phenomenon of leprosy in Japan, and the social stigma that still surrounds the disease. The performances in the film are strong, but the narrow focus on cooking means that the pacing is often toturous. That said, when it all comes together in the final act (before the twee) voiceover, it is clear that ‘Sweet Bean’ is a sweet little film about acceptance and life.
In all, ‘Sweet Bean’ is a film that allows those who are invisible in society – either by choice or not – to be seen by one another, and of course, the audience. The performances are strong, but the pacing is often painful, and the final voiceover of the film is just a step too far in hammering the point home.
RATING: 3/5
Review by Brogen Hayes