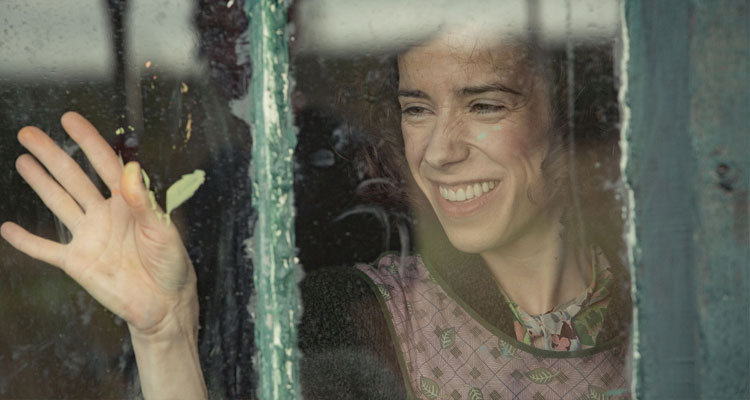 MAUDIE (Ireland|Canada/TBC/115mins)
Directed by Aialing Walsh. Starring Sally Hawkins, Ethan Hawke, Kari Matchett, Zachary Bennett, Gabrielle Rose.
THE PLOT: Maud (Sally Hawkins), an arthritic young woman who is never truly treated as an adult by her aunt Ida (Gabrielle Rose) and her brother Charles (Zachary Bennett), longs for her freedom. To achieve her goal, Maud becomes the live in housekeeper of the surly and cantankerous Everett (Ethan Hawke), and in their small house in Nova Scotia love and Maud’s ability to paint are nurtured.
THE VERDICT: Based on the life of Nova Scotian folk artist Maud Lewis, ‘Maudie’ is a charming film, completely carried by the strong and compelling performances from Hawkins and Hawke. The trouble arises in a saccharine sweet soundtrack that tries to paper over some of the cracks in the film, and a lack of focus in the story.
Sally Hawkins leads the cast as the tenacious, charming and sweet Maud. It is easy to believe that Maud is a character who is just rebellious enough to find the confines of her aunt’s house stifling, but there is a lot more going on underneath the surface of Hawkins’ performance. Hawkins makes Maud a likeable, tough and wilful character, who knows what she wants and what she will tolerate; a character who begins to knock the rough edges off her anti-social husband. Ethan Hawke obviously has fun with the character of Everett, constantly looking as though ht is chewing a particularly angry wasp, and irresistibly charmed by the tiny woman who has forced her way into his life. The two work well together on screen, with Hawkins knocking the rough edges of Hawke, and the chemistry between them lighting the film up from within.
Experienced TV writer Sherry White – who has episodes of ‘Orphan Black’, ‘Saving Hope’ and ‘Rookie Blue’ under her belt – has created a screenplay for ‘Maudie’ that utterly focuses on the tenacity of the title character. Although Maud is a fantastic character, and the relationship between Maud and Everett on screen is a beautiful one, there are times when the film loses focus, and it is not clear if the story is one of love, one of acceptance or one of just not taking no for an answer. The dialogue is strong, however, with Maud having some smart and quick comebacks that bring the character to life.
As director Aisling Walsh – who previously brought us ‘Song for a Raggy Boy’, ‘The Magdalen Laundry’ and episodes of ‘Fingersmith’ – focuses all of her energy on the relationship between Maud and Everett, but in doing so, allows some of the sub plot points to rear their heads and then fall by the wayside. This means that every so often, the focus is taken away from the central characters lives together, but not for any satisfying reason, leaving the audience wondering just why these issues were raised in the first place. Add to this a saccharine sweet score and an unnecessary montage set to music, and the shine quickly rubs off this charming and engaging film.
In all, ‘Maudie’ is a film that suffers from a lack of focus when it comes to the story, and it is never clear just what the central theme of the film is. That said, Hawkins and Hawke are fantastic together, and a joy to watch on screen, but a stronger focus could have moved ‘Maudie’ from a curiosity to a strong and moving film.
RATING: 3.5/5
Review by Brogen Hayes

LAND OF MINE (Denmark|Germany/15A/101 mins)
Directed by Martin Zandvliet. Starring Roland Moller, Louis Hofmann, Oskar Belton, Emil Belton.
THE PLOT: The Danish coastline, May 1945. After five years of occupation by German forces, Sergeant Carl (Roland Moller) can’t wait to see them leave. As we discover in the opening scene, he hates them with a vengeance and for what they’ve done to his country. The war may be over on paper, but it continues in his mind. In anticipation of a possible invasion of Europe through Denmark, German forces littered beaches with over 2 million land mines – more than any other country. Carl is tasked with leading a group of 14 young German soldiers to dig out, disarm and dispose of these mines. Among the group are Sebastian (Louis Hofmann) and twins Werner (Oskar Belton) and Ernst (Emil Belton). It’s dangerous work, but freedom awaits them at the end…
THE VERDICT: Denmark scored an Oscar Nomination for Best Foreign Language film this year with ‘Land Of Mine’, a title that is loaded with meaning. It’s inspired by true events and highlights the fact that the cost of war continues even after a nation’s surrender. It’s not just the humiliation of defeat for these German soldiers, but also the realisation that they have to clean up the mess they created. That’s not all they have to deal with. They also meet with hostility from locals and a have severe lack of food. Feeding German soldiers isn’t a priority and Carl makes no bones about that early on.
The film is centred on the character of Carl, an embittered man who goes through a subtle character arc. While he may despise them, he develops fatherly instincts towards them later on. They are, after all, young men barely out of their teens who have already experienced the horrors of war. They have their whole lives ahead of them, assuming they can survive the beach and its inherent risk of instant injury and death. Moller is excellent here, giving a strong performance that swings back and forth between anger and sympathy. Later on, there’s a sense that he knows they’re not soldiers or even Germans. They’re just kids with one foot already in the grave who want to go home. The younger actors spark off him well too, particularly the soulful Hofmann.
Director Martin Zandvliet literally mines the tension and suspense of his scenario, so sitting comfortably isn’t much of an option here. Mines do explode, but not in a gratuitous manner. He’s more interested in the after-effects, rather than the immediate reaction. A character disappearing altogether after a mine explodes is far more distressing than an injured one. Zandvliet makes smart choices here in his direction, emphasising the humanity rather than the inhumanity. There’s a clear anti-war message here which will linger long after the credits roll. ‘Land Of Mine’ may sound like a risky proposition, but it’s an ultimately rewarding one. Zandvliet achieves a perfect balance between character, tension and meaning. It’s certainly better than ‘The Salesman’, the film that won the Oscar instead.
RATING: 4 / 5
Review by Gareth O’Connor