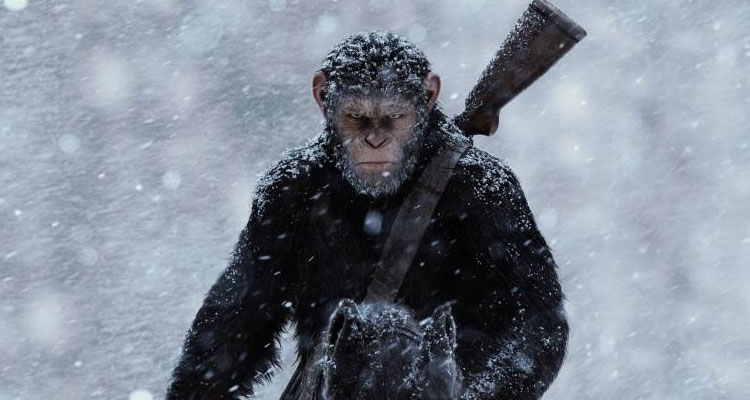 WAR FOR THE PLANET OF THE APES (USA/12A/140 mins)
Directed by Matt Reeves. Starring Andy Serkis, Woody Harrelson, Steve Zahn, Judy Greer, Amiah Miller, Toby Kebbell.
THE PLOT: After militant ape Koba (Toby Kebbell) launched a fierce war between the apes and the surviving humans, leader Caesar (Andy Serkis) sits upon a troubled throne. His apes are looking to him for strength, hope and comfort. It will not be easy to achieve any of this, now that these two worlds are plunged into a bitter conflict. A new human adversary emerges in the form of the ruthless Colonel (Woody Harrelson), who is intent on hunting down the apes and exterminating them once and for all. After an attack on the camp, Caesar sends his community to a safe refuge. He has his own mission, to confront the Colonel in his wintry fortress. He reluctantly accepts the support of Maurice (Karin Konoval), eccentric Bad Ape (Steve Zahn) and a young girl with a significant name (Amiah Miller)..
THE VERDICT: Almost a half century after it first appeared on cinema screens, the durable ‘Planet Of The Apes’ franchise found a new lease in life in 2011. Reboot ‘Rise Of The Planet Of The Apes’ turned out to be one of that summer’s genuine surprises. ‘Dawn Of The Planet Of The Apes’ followed in 2014, adding more complexity and an evolving storyline. Now the story comes full circle with ‘War For The Planet Of The Apes’.
While most movie trilogies predictably drop in quality with each instalment, that’s not the case with this trilogy. If anything, each film here has got progressively better. Looking back, it can now be viewed as a clearly-defined three-act story following Caesar’s evolution from lab ape to conflicted leader, worryingly driven by the same hate that consumed Koba. However, Caesar retains his essential respect for life in any form. He just wants peace and for his community to be left alone, while scattered pockets of the human race struggles against a demise of their own making.
Returning from Dawn, director Matt Reeves and co-writer Mark Bomback peel back the layers of this human / ape conflict, getting to the root of it with increasing moral complexity. There’s a well-defined contrast between Caesar, wrestling with his inner demons and The Colonel, who is an unpopular, hard-line figure even among the surviving humans. At its heart, this trilogy is about survival and co-existence, not about conflict. Conflict is just a by-product of this. Reeves scores highly in being able to keep a delicate balance and sympathy between the apes and the humans here.
More so than the previous two films, Andy Serkis’ performance breaks out of the performance capture suit and pushes at the pixels to become incredibly photo-real and convincing. With a grim look on his face and the weight of a potential new world on his shoulders, Caesar weighs every word, spoken or signed, slowly and carefully. Someone give Serkis an Oscar already or at the very least a nomination. The performances, in and out of the performance capture suit, are uniformly excellent too.
A particular mention should go to Michael Giacchino’s outstanding score. Rich and varied, it has touches of militaristic bombast, John Barry-style sweeping epicness and tender moments that gently underline the dramatic beats of the story. There’s no monkey business here. ‘War For The Planet Of The Apes’ is a very strong finish to this trilogy and undoubtedly a highlight of the summer blockbuster season.
RATING: 4 / 5
Review by Gareth O’Connor

CARS 3 (USA/G/102mins)
Directed by Brian Fee. Starring Owen Wilson, Kerry Washington, Cristela Alonzo, Chris Cooper, Nathan Fillion/
THE PLOT: Still racing in the Piston Cup, but far from being the rookie he once was, Lightning McQueen (Owen Wilson) finds himself struggling to keep up with the newer, faster – and more arrogant – cars entering the sport. To keep his edge, McQueen decides to train with the new technology the young cars are using, but when he meets trainer Cruz Ramirez (Cristela Alonzo) he becomes frustrated with her training techniques and decides to do things his own way.
THE VERDICT: The third film in the ‘Cars’ franchise sees Lightning and the gang return in a story more similar to the first ‘Cars’ movie, and way less silly and Mater-heavy than ‘Cars 2’. Brian Fee takes over directing duties from John Lasseter – who is working on Toy Story 4 – and although the film looks great and is beautifully animated, it still suffers from the issues that plagues the last two films in the franchise.
Most of the voice cast return for ‘Cars 3’, with Owen Wilson leading the way as Lightning McQueen, albeit a more sombre and less annoying version of the character. Larry the Cable Guy, Tony Shalhoub and John Ratzenberger are joined by newcomers to the franchise Cristela Alonzo, Chris Cooper, Nathan Fillion, Armie Hammer and Kerry Washington.
The story, written for the screen by Kiel Murray, Bob Peterson and Mike Rich feels very similar to ‘Cars’ in a lot of ways. Gone is the ridiculousness of Mater being a spy, and the film is stripped back to basics as Lightning tries to figure out how to stay competitive. There is a definite feel of familiarity about the film, as themes from the first film are brought to bear in this third instalment, and although the screenplay tries its best to make Lightning a more relatable character, he still comes off as arrogant, albeit someone perhaps those aware of encroaching middle age in the audience may relate to.
As director, Brian Fee manages to make the film entertaining for the most part, but never manages to shake the familiar feeling about ‘Cars 3’. As well as this, there are times when the films pacing sincerely struggles, and not even the zooming race sequences can give the film the energy it so desperately needs. That said, the film is beautifully animated, and the voice cast do well in their roles, but there is little new or different about ‘Cars 3’, and not a lot to hold the attention of the little ones in the audience.
In all, ‘Cars 3’ looks great and the voice cast do well with their roles, but anyone expecting something different from the franchise will be sorely disappointed. As well as this, the pacing struggles from time to time, and none of the characters feel fleshed out enough to keep the audience engaged. Also, the questions we all have about just what happened in the ‘Cars’ universe are not addressed, which just leads to further questions.
RATING: 2/5
Review by Brogen Hayes