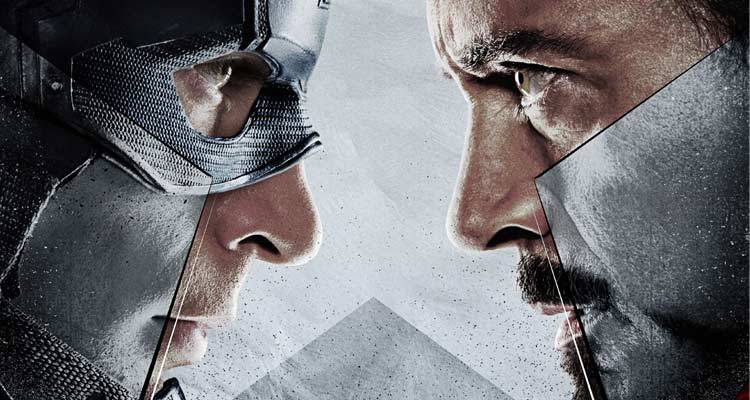 CAPTAIN AMERICA: CIVIL WAR (USA/12A/147mins)
Directed by Anthony Russo, Joe Russo. Starring Chris Evans, Robert Downey Jr, Scarlett Johansson, Sebastian Stan, Anthony Mackie, Don Cheadle, Jeremy Renner, Chadwick Boweman, Paul Bettany, Elizabeth Olsen, Paul Rudd, Emily VanCamp, Marisa Tomei, Tom Holland, Frank Gillo, Martin Freeman, William Hurt, Daniel Bruhl, Hope David, John Slattery, Alfre Woodard.
THE PLOT: With the political pressure tearing the Avengers in two, in the blue corner, Captain America (Evans) who believes that they should be left to fight the good fight without any government interference, whilst in the red corner, Iron Man (Downey) reckons having someone holding the driving wheel for them is necessary. It doesn’t help that, on their latest world-saving mission in Lagos, chasing down some blood-thirsty mercenaries, Scarlet Witch (Olsen) inadvertently sets a high-rise building on fire, killing many innocent civilians. Such collateral damage hasn’t gone unnoticed, and these superheroes will have to start being a little less unhinged and a little more U.N. But which of the two American superheroes will win this internal, eternal American battle?
THE VERDICT: Man, talk about ticking all the boxes.
We don’t normally go for listing so many cast members, but, take a look at that line-up. There’s something for everyone there, and just about every single one of them is worthy of your love attention. Sure, Downey is slowly becoming the new Depp – who’s slowly become the new Cage, who has now become the new Chuck Norris – but, there are just so many good, reliable, solid, huggable actors here.
And what it shows is not so much the budget but the big hairy balls of the Marvel franchise, that smart mix blueprinted by the sometimes-great Jerry Bruckheimer taken to its logical, methodical, almost pathological conclusion. Satisfy every four quadrants of the cinema-going audience, with top-of-the-range action, eye-popping spectacles, a few Shakespearean twists and turns, delivered by sexy, sexy people from the multiplexes and the arthouses, and then just make sure to cram your genre pic with self-deprecating gags. That last part is the crucial ingredient when it comes to any truly loved blockbuster – making the audience laugh, and making them feel like they’re in on the joke. That they’re behind the curtain with the wizard. That your Halloween-costume-worthy lead protagonists are on their way to a kill and they’re just shooting the s**t about Royales with cheese. That this is their team.
It all works here. Beautifully. And lest you think, just because ‘Captain America: Civil War’ bounces along – despite the introduction of major new characters to an already Showaddywaddy-sized ensemble cast – hey, all this crash, bang, box-office wallop is easy, then think about those original ‘X-Men’ movies, and how they buckled under the all-star weight. Think of the woeful ‘Fantastic Four’ outings, twice stepping up to the plate, and twice stinking to high heaven. Most importantly, think about what a piece of s**t ‘Batman vs Superman: Dawn of Justice’ is. That’s when you realise just how good these Marvel movies are…
RATING: 4/5
Review by Paul Byrne

SON OF SAUL (Hungary/15A/107mins)
Directed by László Nemes. Starring Géza Róhrig, Levente Molnár, Urs Rechn, Todd Charmont, Jerzy Walczak, Gergó Farkas, Uwe Lauer, Christian Harting.
THE PLOT: With what seems like one endless shot, we join Saul (Róhrig) as he goes about his daily job in Auschwitz-Birkenau, leading a large group of Jews, first to a changing room, and then, to the showers. Where they are soon banging on the doors to get out as Saul starts systematically taking away all their clothes. Saul knows it’s best if he keeps to himself as much as humanly possible, but his survival routine is thrown when he discovers the corpse of what he believes to be his son. Determined that the boy should have a proper Jewish burial rather than be simply thrown into the ovens means Saul has to break many of the rules he so meticulously follows…
THE VERDICT: Telling the story of the holocaust through the experience of just one man works wonders here for first-time writer/director Laszlo Nemes. The challenge of taking not only a grim slice of 20th century history and capturing its true horror in just over and hour-and-a-half but also taking on a subject that cinema has long been tackling without appearing to be treading on overly-familiar ground is met here with a truly engaging film.
Not that Son Of Saul is an easy watch – in truth, how could it be? Do we really want another Life Is Beautiful? Another The Day The Clown Cried? Any movie about such a dark blot on our planet should be difficult, should be troubling. We stay mercifcully close to Saul through, Nemes movie at times seeming like a perverted take on Douglas Gordon and Philippe Parreno’s 2006 documentary Zidane: A 21st Century Portrait. Whenever the camera does pull back from Saul’s face, the focus usually kills any chance of the outside world coming fully into view.
It’s a highly effective approach, and it’s clear why the Cannes committee were happy to put this first-timer in their competition last year. Be prepared to be moved.
RATING: 4/5
Review by Paul Byrne

DEMOLITION (USA/15A/101mins)
Directed by Jean-Marc Valleé. Starring Jake Gyllenhaal, Naomi Watts, Chris Cooper, Judah Lewis, CJ Wilson.
THE PLOT: After his wife is killed in a car crash, which he escapes without a scratch, Davis’s (Jake Gyllenhaal) grief takes a strange form. When a packet of peanut M&Ms gets stuck in a vending machine, Davis finds himself writing long, confessional letters to the company’s customer care department, and taking some advice from his father in law quite literally, he begins dismantling household objects that no longer work.
THE VERDICT: After the success of ‘Dallas Buyers Club’, and the acclaim for ‘Wild’, director Jean-Marc Vallée returns with a tale of grief and friendship in ‘Demolition’. Jake Gyllenhall stars as Davis, and brings some quiet concentration to the role. Davis spends much of the film revelling in his new-found honesty, and it is this honesty that makes Davis such an intriguing character. Well this, and the fact that the character takes delight in pulling things apart with no intention on putting them back together. Gyllenhaal does not shy away from the strangeness of his character, instead enjoying the chance to tell a different story of grief and coping.
Naomi Watts plays Karen, the woman in customer care who receives Davis’ letters, and decides to call him in the middle of the night to talk. The friendship that springs up between the two is warm and sweet, as these two obviously broken people try to find comfort in the time they spend together. The rest of the cast features Chris Cooper, Heather Lind, Polly Draper, Judah Lewis and C.J. Wilson.
Bryan Sipe’s screenplay is an examination of the different ways that people deal with grief; Davis finds it easy to talk to a stranger about his problems, while acknowledging the delight that the character takes in pulling things apart. When Davis and Karen are simply writing to one another and talking on the phone, this is when the film is at its best. When the two meet however, the film takes an abrupt emotional turn that is less engaging than what has gone before. The metaphors run strong with this one, but the idea of Davis pulling everything apart in order to put his life back together works in the context of this strange, endearing film.
As director, Jean-Marc Vallée allows Davis to struggle with his lack of emotion, and takes the audience on an odd emotional journey that is filled with the lead character’s numbness. The rest of the performances are strong and engaging, with each character relatable, if not always easily understood. The pacing of the film is an issue however, as the weird intrigue of the story drops when Davis and Karen meet, meaning the film feels like it is indulging Davis’ strangeness, rather than allowing him to move forward. That said, the scenes of gleeful destruction are fun to watch, and while Davis takes a while to come through this emotional journey, the payoff is strong when he does.
In all, ‘Demolition’ is an odd, engaging and sweet film, anchored by Gyllenhaal’s gleefully strange character. The metaphor may be a little forceful, but this tale of a man trying to find a way to grieve is funny and sad in equal measure. It’s just a shame the pacing drops in the middle of the film, and the endearing oddness evaporates from time to time.
RATING: 4/5
Review by Brogen Hayes

ATLANTIC (Ireland/Club/82mins)
Directed by Risteard O’Domhnaill. Starring Kevin Flannery, Jerry Early, Charlie Kane,
THE PLOT: Examining the current state of affairs when it comes to fishing the Atlantic, we visit three seafaring communities – in Newfoundland, Ireland and Norway – to chart the rise of big business and the near-collapse of local fishing industries. Over in Newfoundland, Charlie Kane is one of the few residents left in the small fishing village of Renews, after chronic over-fishing led to a 1992 moratorium on harvesting cod that was supposed to be in effect for two years but is still going strong 21 years later. In Ireland, Kevin Flannery, a former Sea Fisheries Protection Officer, reflects on Ireland’s joining of the EU in 1973, and the deal that gave the country farming subsidaries in return for the handing over of control of fishing in our waters. Today, the five main fishing ports in the country are dominated by French and Spanish trawlers, with Ireland’s fishermen being given access to just 4% of our own waters, even though we own 25% of the EU fishery waters. Off the coast of Castletownbere, for one local fisherman, checking just how many ships are off the coast on his computer, it’s a feeding frenzy out there – verging on “rape”.
In Norway, they refused to sign up to sign up the EU’s deal, deciding instead keeping their soverignty, and are now the world’s second largest exporter of fish, with an industry that’s worth €9b to their coastal economy every year. Ireland’s return is just 6% of this.
THE VERDICT: Having hit hard with his 2010 documentary The Pipe – charting a small Irish village going into battle with Corrib Gas – Risteard O’Domhnaill has bigger fish to fry in Atlantic, a stealthy, steady look at the fishing crisis that now stretches from the grand banks of Newfoundland to the west coast of Ireland, and on up to the frozen Norwegian artic.
The three ports that O’Domhnaill visits all tell a sad and angry tale, of big business taking over from centuries of tradition, squeezing out communities as profit-chasing again and again buckles the wheel. Where natural resources are stripped for short-term gains, creating serious long-term loss.
It makes for depressing viewing, of course, but Atlantic gets to the heart of the matter with a calm urgency, letting the beleagured and somewhat resigned people directly affected do the talking rather than rely on any headline spinning or edit-room exclamation marks.
Natural resources being swallowed up by big business is a familiar story all over the world today, but, it’s one that needs to be told. And Risteard O’Domhnaill lets his head rule over his heart here, delivering an intelligent, insightful and, ultimately, very moving documentary.
RATING: 4/5
Review by Paul Byrne