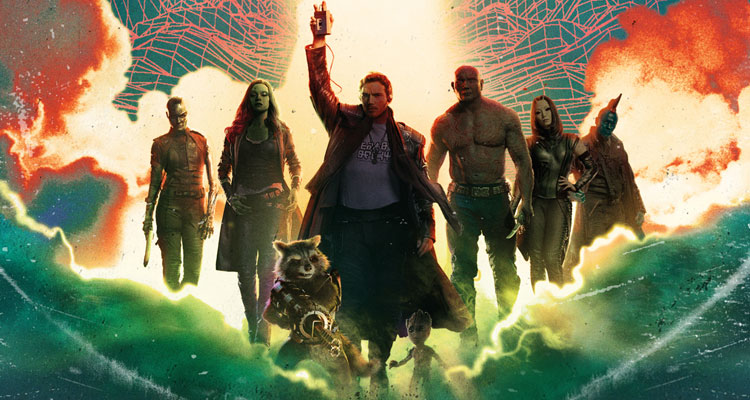 GUARDIANS OF THE GALAXY VOL. 2 (USA/12A/137mins)
Directed by James Gunn. Starring Chris Pratt, Zoe Saldana, Karen Gillan, Dave Bautista, Vin Diesel.
THE PLOT: Not long after the events of the first film, the Guardians are tasked with protecting valuable batteries from attack. Although they complete their mission their employers – The Sovereign Race – are not too happy to learn some of their batteries are missing. When the Guardians are saved from an epic space battle by a mysterious stranger, they realise that this man may have answers about Peter Quill’s (Chris Pratt) true parentage, and be the link to the family that Quill never knew. I am Groot!
THE VERDICT: Three years after ‘Guardians of the Galaxy’ burst into the worldwide box office, capturing hearts and minds of fans and newcomers alike, this lovable band of misfits are back with a more personal story than the one that went before, and some valuable lessons for the audience about the nature of family.
Chris Pratt, Zoe Saldana, Karen Gillan, Vin Diesel, Bradley Cooper and Michael Rooker all reprise their roles from the first film, and the chemistry, comedy and deep emotional heart that they created the first time also returns. Karen Gillan gets more of a chance to make Nebula feel like a rounded character, Vin Diesel makes Baby Groot the cutest thing in cinemas so far this year, and some unlikely pairings throughout the film make for some interesting revelations throughout. The returning actors are joined by Kurt Russell as Ego, whose character is utterly charming, but ultimately lives up to his name, Sean Gunn who finally gets some decent face time in a ‘Guardians’ film- Gunn provided the mo-cap for Groot the first time around – Elizabeth Debicki as the proud Sovereign leader Ayesha and Pom Klementieff as the awkward but sweet Mantis.
The story, written for the screen by James Gunn, has all the comedy and quips we have come to expect from a ‘Guardians of the Galaxy’ film, but since this is a tale of family – both chosen and blood relatives – there is a deep vein of emotion running throughout the film that Gunn is not afraid to mine, and does so in a balanced and engaging way. The set pieces are well spaced throughout the film and, since this film does not tie into the wider MCU as a whole, there is a feeling that ‘Guardians of the Galaxy Vol. 2’ is a film that truly stands alone, without being stymied by trying to fit into a wider narrative.
As director, James Gunn balances comedy, family drama and action very well, and although the final set piece feels a little drawn out, the film as a whole is well paced, with the story moving at a fun and compelling pace. As mentioned, some unexpected pairings of the characters leads to truths and emotions being revealed in a manner that feels organic and unforced. If there were to be complaints about the fun, fast paced and touching ‘Guardians of the Galaxy Vol. 2’; there are times toward the end of the film that the pacing drags its heels slightly, and the lightning in a bottle feel of the soundtrack to the first film is missing, with less recognisable songs being used, and in a less engaging way… Although since ‘Suicide Squad’ ripped off the ‘Guardians of the Galaxy’ soundtrack idea, perhaps this is no bad thing.
In all, ‘Guardians of the Galaxy Vol. 2’ is a rare thing; a sequel that almost lives up to the original. There is tons of fun, heart and action in the film, and James Gunn has managed to make antagonists from the first film those that the audience roots for this time around. ‘Guardians of the Galaxy Vol. 2’ is a gem that is going to keep fans happy and certainly set the box office alight; we can’t wait to see what Volume 3 brings. I am Groot, indeed!
RATING: 4.5/5
Review by Brogen Hayes

LADY MACBETH (UK/16/89mins)
Directed by William Oldroyd. Starring Florence Pugh, Christopher Fairbank, Cosmo Jarvis, Bill Fellows, Naomi Ackle
THE PLOT: Katherine (Florence Pugh) is sold into marriage with Alexander (Paul Hilton), a caustic and rough middle-aged man who is unable to consummate their marriage. When Alexander and his father are both called away from the house, Katherine at first roams the halls like a ghost in crinolines, but soon begins an affair with a farm hand, an affair that has far reaching consequences.
THE VERDICT: Based on Nikolai Leskov’s 19th century novel Lady Macbeth of the Mtsensk, and adapted for the screen and anglicised by writer Alice Birch, Lady Macbeth showcases the shocking and beautiful talents of Florence Pugh, while giving weight to the old notion that “it’s grim up North”.
Florence Pugh is front and centre in ‘Lady Macbeth’, and easily carries her first leading role, making Katherine fascinating, horrifying and complicated; no matter how much the camera gazes at her, Katherine’s motivations are almost never completely clear, and this is what makes her such a vibrant character. The rest of the cast features Christopher Fairbank, Cosmo Jarvis, Bill Fellows, and Naomi Ackle in a wonderful turn as Anna, Katherine’s maid and main antagonist.
Alice Birch’s screenplay keeps the dialogue of the film caustic and violent, and although ‘Lady Macbeth’ screams out for a moment of tenderness, these are few and far between, and often marred with violence. Katherine is a complicated character, well written as to be inscrutable through much of the film, and to make the rest of the characters seem weak and meek by comparison to her. Anna is a great balance to Katherine, and it is through her eyes that we see the moral quandries that she is placed in, and Sebastian goes from being violent to frightened in the face of the passions of his lover, Katherine.
Director William Oldroyd allows the film to unfold in front of the camera; never shying away from a silent moment, or from showing Katherine as an intruder in the home she has been forced to move to. There are gentle shifts in Katherine’s character throughout the first half of the film that Oldroyd allows to unfold on screen, but it is not until the finale that we learn the depths of Katherine’s ruthlessness, and the fact that her surroundings – or perhaps the treatment of her throughout her life – have changed the way she views life.
In all, ‘Lady Macbeth’ is a dark, grim and often challenging film to endure, but Florence Pugh makes Katherine a fascinating, terrifying character who it is hard to resist. The relentless darkness, however, sometimes becomes intrusive and challenging.
RATING: 4/5
Review by Brogen Hayes

THE PROMISE (Spain | USA/12A/133mins)
Directed by Terry George. Starring Oscar Isaac, Charlotte LeBon, Christian Bale
THE PLOT: Against the backdrop of World War I, Armenian medical student Michael (Oscar Isaac) travels to Constantinople to continue his studies, leaving his family and fiancée – whose dowry he is using to pay for his education – back home. Michael falls for the beautiful Ana (Charlotte Le Bon) in Constantinople, and as Constantinople burns from riots and turmoil, the two have an illicit affair behind Ana’s boyfriend Chris (Christian Bale) back.
THE VERDICT: ‘The Promise’ is a film that, on the surface, we have seen the like of before; love in a time of war. The interesting thing here is that director Terry George’s previous films include ‘Some Mother’s Son’, ‘In the Name of the Father’ and ‘Hotel Rwanda’; all films about troubles with identity, nationality and power, and ‘The Promise’ is really no different, as it is set against the Armenian genocide between 1915 and 1923.
Oscar Isaac leads the cast as Michael, a man who does not seem to have the courage of his convictions, and is almost always bailed out by the actions of others. Isaac makes Michael a charming enough character, but is consistently struggling against a screenplay that wants to paint him as anything but a hero. There is little doubt that Charlotte Le Bon is beautiful, but she gets very little chance to flesh out the character of Ana, and give the audience an understanding of just why men fall at her feet. Christian Bales makes Chris brash and loudly American, and a man who is desperate for the world at large to know what is happening as the Ottoman Empire crumbles, while drinking himself to death and being generally obnoxious. The rest of the cast features Shohreh Aghdashloo, Tom Hollander, James Cromwell and Jean Reno who, like the rest of the cast, struggle through the film in a variety of accents, and Angela Sarafyan who, unlike the rest of the main cast, actually is of Armenian descent.
Terry George and Robin Swicord’s screenplay struggles with trying to be all things to all men, and ends up being not much to any. There is a love triangle, a war machine, a coward and a woman waiting at home, as well as a glimpse at a concentration camp, and hints of racism throughout the film. The true subject of the film – the genocide of Armenian people – does not even enter proceedings until over an hour in, and the love story that it replaces is insipid and unengaging.
As director Terry George allows ‘The Promise’ to be rambling and loosely structured, where the story needs a firm hand to guide it through and keep the audience engaged with the characters, who are not particularly well drawn. The pacing is ponderous throughout the film, and other than some casual “you are not like us”-esque statements from Turkish characters, the film never tries to explain the reason for the Armenian genocide, other than the dissolution of the Ottoman Empire, which is mentioned in passing. Terry George is known for exploring national identity under fire, but struggles to get his point across in ‘The Promise’.
In all, ‘The Promise’ does not work fully on any level; as a love story, an examination of war or shining a spotlight on genocide, and although the film is populated with wonderful actors, the entire film is lacklustre and unengaging.
RATING: 2/5
Review by Brogen Hayes