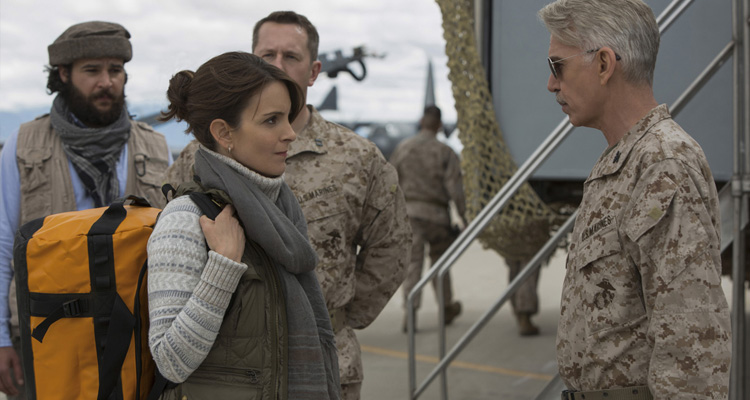 WHISKEY TANGO FOXTROT (USA/15A/112mins)
Directed by Glenn Ficarra, John Requa. Starring Tina Fey, Margot Robbie, Billy Bob Thornton, Martin Freeman, Alfred Molina.
THE PLOT: In 2001, journalist Kim Barker (Tina Fey) finds herself in Afghanistan, covering the war from a considerably quieter place than the war-torn Iraq. As such, friendships and allegiances grow up in the international community stationed in Kabul. As the Taliban grow stronger and interest in the country receds however, Kim finds herself fighting for her job, and the new relationship that has developed between her and Scottish photographer Iain (Martin Freeman).
THE PLOT: ‘Whiskey Tango Foxtrot’ – of course an allusion to the abbreviation WTF – is based on the real life memoirs of Kim Barker who was stationed in Afghanistan for several years. Although there is plenty of absurdity to laugh at, in trying to make the story a comedy, ‘Whiskey Tango Foxtrot’ feels uneven and rather like it is trying too hard.
Tina Fey leads the cast here as Kim Barker, a journalist who at first feels like a fish out of water, before becoming too used to the new world she finds herself in. Fey is charming as usual, and carries the film ably. Margot Robbie plays competing journalist Tanya, and this may be the first time the actress has played a character who does not rely on her beauty to get what she wants, but is cunning and smart. Martin Freeman takes a step away from playing the affable everyman to play a rather more caustic character, and the rest of the cast features Billy Bob Thornton, Alfred Molina and Josh Charles.
Robert Carlock’s screenplay plays with the absurd conditions that these journalists found themselves in in Kabul, while making sure to show off the fact that their arrogance in the field often caused more harm than good. There is definite emphasis put on the fact that these reporters get too comfortable in the “Kabubble” and forget that people’s lives are in danger just outside the walls of their home, but the trouble is that while there are a few laughs at the start of the film, the comedy quickly stops coming, leaving the film feeling uneven and slightly awkward.
Directors Glenn Ficarra and John Requa, whose previous films include ‘Focus’ and ‘I Love You Phillip Morris’ struggle with the pacing of the film, as the middle section feels flat and the beginning too rushed. The performances are strong enough to make the film work, but the lack of a strong vision in terms of tone – is this a comedy or not – means that the film ends up feeling less clever than it thinks it is, and rather more messy.
In all, ‘Whiskey Tango Foxtrot’ is a comedy that’s not really that funny. There is a story to be told about the journalists who embedded in Afghanistan then forgot where home was, but Whiskey Tango Foxtrot is not it. Still there are some laughs at the start, Martin Freeman obviously has fun and Tina Fey is infinitely watchable, so ‘Whiskey Tango Foxtrot’ isn’t all bad, just a little uneven and badly paced.
RATING: 3/5
Review by Brogen Hayes

BASTILLE DAY (France | USA/15A/92mins)
Directed by Gavin Hood. Starring Idris Elba, Charlotte LeBon, Richard Madden, Kelly Reilly, Anatol Yusef.
THE PLOT: Michael Mason (Richard Madden) finds himself under suspicion of planting a bomb in Paris, but when he proves to CIA agent Sean Briar (Elba), that he is merely a talented pickpocket, the two team up to stop more attacks and uncover the motivation behind chaos being caused in Paris on the run up to their national holiday, Bastille Day.
THE VERDICT: There have been rumours for a long time now about Idris Elba taking over the role of James Bond in the long running film franchise, and although it now seems that the rumours are nothing more than that, ‘Bastille Day’ proves that the actor is more than capable of taking on an action role, even if the rest of the film is not filled with exciting performances or a script that makes sense.
As mentioned Idris Elba is strong in the role of CIA agent Sean Briar, he easily takes on the action sequences and makes them thrilling, while also creating an imposing and threatening character. However, Elba is never truly given a chance to create a fully rounded character, and although we are given plenty of back story to the character, this is more used to set up the rest of the film than form a full character. The same goes for Richard Madden as Michael Mason; Madden never truly gets a chance to make the character anything other than a charming pickpocket, and we never get a real sense of the character. That said, it seems that Charlotte Le Bon as Zoe gets the rawest deal of all; the character makes choices throughout the film that son’t make much sense and are not in keeping with the person we see on the screen. As well as this, Zoe often changes her mind and her attitude, quickly throwing in with whomever seems the strongest at the time. Kelly Reilly, José Garcia and Anatol Yusef suffer similarly, being little more than vehicles for exposition.
Andrew Baldwin’s screenplay tries to make ‘Bastille Day’ an engaging thriller that doesn’t rely on the usual tropes of terrorism, but by the time the villains’ true motivations are revealed, the film is littered with misdirects and odd choices, that does not make this revelation so much of a twist than an uninteresting swerve that again, makes little sense. In fact, the set up for the film works fairly well, but motivations and revelations are weak and unengaging throughout.
As director, James Wadkins does well with the action sequences, making them fast paced, breathless and thrilling,. But the same does not apply for the more slowly paced, dialogue heavy scenes. The twists are obvious from the start, and although Idris Elba’s performance is strong, the same cannot be said for the rest of the cast, who struggle throughout the film
In all, ‘Bastille Day’ tries to be an engaging thriller that quickly turns expectations on their heads, but the cast struggles with a scattered script, and although the action scenes are strong, the resolution of the film feels as though it would not be out of place in a 1970s sitcom.
RATING: 2.5/5
Review by Brogen Hayes

LOUDER THAN BOMBS (Norway | France | Denmark/15A/105mins)
Directed by Joaquim Trier.Starring Isabelle Huppert, Gabriel Byrne, Jesse Eisenberg, Devin Druid.
THE PLOT: Four years after the death of a famed war photographer (Isabelle Huppert), her family are still dealing with her death to varying degrees. When a New York Times journalist promises to write an article about the late photographer, revealing the truth about her death, the family is left to deal with the implications of the truth.
THE VERDICT: ‘Louder Than Bombs’ is director Joaquim Trier’s first English language film, but the story seems rather simple, and in some ways it is, but it also feels a little too close to Juliette Binoche’s ‘A Thousand Times Goodnight’, which was only released in Ireland last year.
Isabelle Huppert appears in flashback, as the family try to reconcile the past and the future. She is magnetic as usual, but feels more like a catalyst than a fully rounded character. Gabriel Byrne plays the grieving and rather bewildered father of two sons; one of whom appears to have his life together, and the other whose teen life is falling apart. Jesse Eisenberg plays Jonah, the older of the two sons, who arrogantly believes that his life is on track, but soon realises that this is not the case. Eisenberg has a brilliantly comic opening scene, but this falls by the wayside as the film goes on. Devin Druid plays the younger son Conrad as angry and sulky – a typical ten, one might say – who has a vein of narcissism running through him. The cast do well enough with what they are given, but are let down by a baffling and rather pointless story.
Joachim Trier and Eskil Vogt’s screenplay attempts to deal with the varying degrees of grief, and how emotions and grief becomes dulled the more time passes. While the film starts off well and seems to be working toward a satisfying emotional resolution, this never truly comes to pass, and the road to the final act of the film is so littered with actions and moments that never really connect.
As director, Trier tries to tie the family’s individual stories together, as secrets about the past are revealed and emotions change due to the passage of time, but the uneventful and muddled screenplay works against him. There are some moments of greatness, such as Conrad’s stream of consciousness letter that he gives to his crush is beautifully realised, but this moment never truly connects, and is never resolved in the framework of the film.
In all, ‘Louder Than Bombs’ implies, from its title, that the emotional fallout of war and death is truly devastating, but all we see in the film are selfish characters making strange decisions, and a fragmented story that never truly comes together.
RATING: 2/5
Review by Brogen Hayes

THE PLOT: We first meet Miles (Cheadle) during his Howard Hughes years, the music legend having retired from music in 1975 for almost five years. Trying to coax him out of his shell is freelance journalist Dave Brill, who gets his foot in the door by pretending to be writing up a Rolling Stone cover story. Miles is a recluse, and a junkie, and it’s only when a cheque from Columbia fails to materialise does he take a ride with this cuckoo who’s barged in on his nest. Columbia want the reel-to-reel of new music Miles has been working on. Miles just wants to be left alone, to get stoned, and maybe even work on that music.

What follows is akin to, fittingly enough, a stoned Raymond Chandler thriller, as that precious reel-to-reel is stolen out from under the nose of a thief, sparking off a gun-toting game of tag across the city.

THE VERDICT: If Frank Zappa argued that writing about music is akin to dancing about architecture, making movies about music must be synchronized swimming about prime mortgages. It rarely makes much sense, especially when actual footage of those being portrayed exists.

Has anyone ever played Elvis convincingly? Or The Beatles? More recent examples Jimi: All Is By My Side (2003) and Get On Up (2014) – about Hendrix and James Brown, respectively – were brave, unflashy attempts to look behind the curtain a little, but neither came anywhere near the real thing. And the same can be said for Miles Ahead.

The directorial debut of its leading man, Cheadle was pretty much the chosen one, as far as the Miles Davis family were concerned. And he certainly walks the pimp-ass walk, and talks the raspy talk. Cheadle goes full Bitches Brew on the edit here too, Miles Ahead often jumping from timeframe to timeframe, whilst the music jumps from early jazz and be-bop Miles to the mad jazz-funk concoctions that brought him a whole new audience in the years before his retirement.

One of those films where the soundtrack – full of Miles beauties alongside some dialogue from the film – gives you the bigger kick.