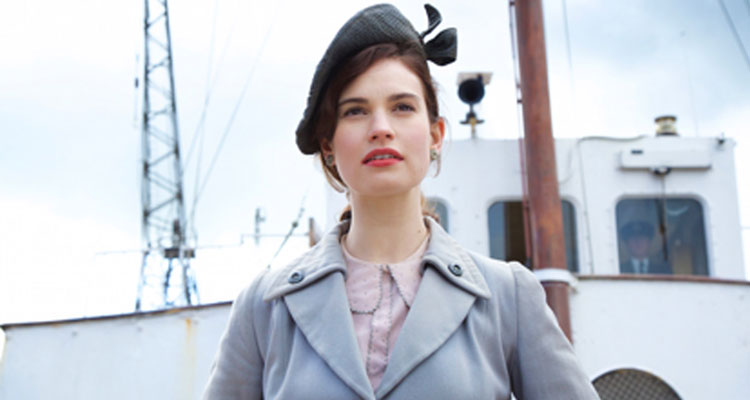 THE GUERNSEY LITERARY AND POTATO PEEL PIE SOCIETY (USA / UK / 12A / 124 mins)
Directed by Mike Newell. Starring Lily James, Michael Huisman, Matthew Goode, Jessica Brown Findlay, Tom Courtenay, Penelope Wilton.
THE PLOT: Post-war London. Juliet (Lily James) is an avid reader and an even more passionate writer. Her latest book on Anne Bronte wasn’t exactly a bestseller. Still, her publisher Sidney (Matthew Goode) has confidence in her cheerful approach to life. Juliet is contacted by Guernsey resident Dawsey (Michael Huisman) about tracking down a Shakespeare book. He relates a brief story about his book club, The Guernsey Literary And Potato Peel Pie Society and how it gave them hope during the German occupation. Intrigued, Juliet heads to the small island in the English Channel to find out more. There, she meets the other members of the Society including the bitter Amelia (Penelope Wilton), who objects to Juliet writing about their wartime experiences. However, this is a story that needs to be told…
THE VERDICT: Forget the marquee-busting title, which is amusingly poked at the by the film itself. Within this quirky potato peel pie lies a sweet, pleasant and occasionally moving centre. It’s also more than a little bit predictable, but more on that later. It’s based on the book by Annie Barrows and Mary Ann Shaffer and features the little-seen Channel Island of Guernsey as both a subject and a character in itself. Its unfamiliarity (to this reviewer anyway) is part of the film’s charm, relating how a small group of islanders and book lovers tried to retain their humanity while a devastating war raged across Europe.
Director Mike Newell sets the scene early on with our main character, establishing her as a curious soul who is interested in people as much as places. He also sketches out the islanders early on, ensuring that they don’t come across as stereotypical country yokels who might be suspicious of big city folk (well, except for Bronagh Gallagher’s hilariously prim hotel manager). As Juliet discovers more about the Society, she peels away the layers of pain that resulted during the War and discovers some dark truths about how their lives were affected. This is where the script and Newell’s delivery of it is the strongest. There’s no judgment here, just compassion for their circumstances.
The weaker element of the film is in Juliet’s own personal life. She’s engaged to be married to a decent American (Glen Powell). As soon as she arrives on Guernsey though, one can see which way the wind is going to blow. Therein lies the predictability of the film, which easily plays into it and even sets up a romcom-style last minute rush. The film is smart enough to do without that sort of well-worn, groan-inducing cliché. Still, ‘The Guernsey Literary And Potato Peel Pie Society’ has more than enough of the tasty stuff (good character development, solid performances, pretty locales) to warrant a light recommendation. It’s a pleasant Sunday afternoon film and won’t leave a bad taste in the mouth, like a certain pie.
RATING: 3 / 5
Review by Gareth O’Connor

LET THE SUNSHINE IN (France / Belgium / 15A / 95 mins)
Directed by Claire Denis. Starring Juliette Binoche, Xavier Beauvois, Nicolas Duvauchelle, Gerard Depardieu.
THE PLOT: Parisian artist Isabelle (Juliette Binoche) is in a bit of a funk when it comes to her love life. Now divorced and living with her 10-year-old daughter, she’s finally looking for the great love of her life. In all the wrong places of course, starting with sleazeball married man Vincent (Xavier Beauvois), who is possessive and jealous of any attention she gets from other men. Then there’s an actor (Nicolas Davauchelle), who is in a failing marriage. However, he’s too self-involved to notice what Isabelle really wants. There are other men too – but which is the right one?
THE VERDICT: ‘Let The Sunshine In’ is Claire Denis’ most satisfying film in quite a while. It’s a typically atypical Denis affair, with the veteran French director subverting the tropes of the romantic drama to deliver something that feels fresh and original. She gets into the story which she co-wrote with Christine Angot with gusto, starting with an intimate scene involving Isabelle and Vincent, a la Betty Blue. Except these aren’t young lovers in a tale of amour fou, but more mature people who are still looking for direction in their lives.
The story charts Isabelle’s relationships with a number of men, all of whom are charming, flawed and all too human in their own ways. The film scores points early on by not depicting these men as caricatures. They’re more fleshed out than that, so one can see Isabelle’s attraction to them and yet understand why they’re unsuitable for her. She’s tired of being the backstreet lover. As a friend tells her later in the story, she needs to find someone in her milieu i.e. the artistic community. However, even they don’t entirely match her. Denis doesn’t take the easy route here, preferring to show how messy and complicated relationships really are.
Besides the well-written and occasionally witty script, a large part of the success of this charmingly low-key film rests on Binoche’s considerable shoulders. As luminous as ever, Binoche brings a sense of frustration, mixed in with passion and hope, for how Isabelle is navigating these rocky waters in her life. She keeps the character grounded, realistic about expectations. A late appearance by a charismatic Gerard Depardieu wraps things up nicely, as he delivers home a telling speech which sums up the film in a nutshell. There’s much to enjoy here in this disarming look at the state of modern relationships, with a French twist for good measure. ‘Let The Sunshine In’ shines bright.
RATING: 4 / 5
Review by Gareth O’Connor

MARLINA THE MURDERER IN FOUR ACTS (Indonesia / France / Malaysia / Thailand / Club / 93 mins)
Directed by Mouly Surya. Starring Marsha Timothy, Egy Fedly, Dea Panendra.
THE PLOT: Sumba, Indonesia. Marlina (Marsha Anthony) is mourning the recent death of her husband. She now lives alone in a house well out of town. One evening, Markus (Egy Fedly) arrives with his group of bandits. It appears that her husband left some debts. While two of them leave with her livestock, she’s forced to cook dinner for the remaining five. With her house occupied by unwanted intruders and a looming threat of rape, she takes action. This is just the beginning of her journey from grief to acceptance…
THE VERDICT: ‘Marlina The Murderer In Four Acts’ is a most curious film. The most succinct summation would be that it’s a neo-western Asian feminist revenge thriller. That’s only half of it though, as director and co-writer Mouly Surya also tips her hat towards Sergio Leone and Sam Peckinpah. The twanging guitar music and desolate landscapes has more than a touch of Leone. While Peckinpah may not have been known for his strong female characters, you can certainly see shades of Bring Me The Head Of Alfredo Garcia here too.
Divided by Surya into the titular four acts – ‘The Robbery’, ‘The Journey’, ‘The Confession’ and ‘The Birth’, the film charts Marlina’s journey from vengeful murderer to a form of inner peace with herself. For the remaining three quarters of the film, she walks around with Markus’ severed head as if it was an everyday object. She’s not going mad though. The fund-starved local police are of little help, so she will have to take out the remaining two bandits along with the help of her heavily-pregnant friend Novi (Dea Panendra).
This oddball mix of storylines, plot developments and gallows humour is head-scratchingly obscure at times (for example, Markus’s decapitated body appears at various intervals). The story has quite a tendency to drift at times, losing focus on our main character. However, most of the film is surprisingly accessible. The men aren’t too bright, with Markus dismissing Marlina as happy to play the victim. She’s no victim though. She dispatches the men with a cool brutality. Don’t mess with moody, broody women. If there’s another message here, it’s that in the midst of death we are in life.
‘Marlina The Murderer In Four Acts’ doesn’t come with an easy recommendation. Its obliqueness might irk at times, but that’s not uncommon in Asian cinema. However, it’s undeniably powerful and full of striking imagery which carry the story through to its ‘Thelma And Louise’-style conclusion. The late Leone and Peckinpah might just tip their spurs in approval.
RATING: 3 / 5
Review by Gareth O’Connor