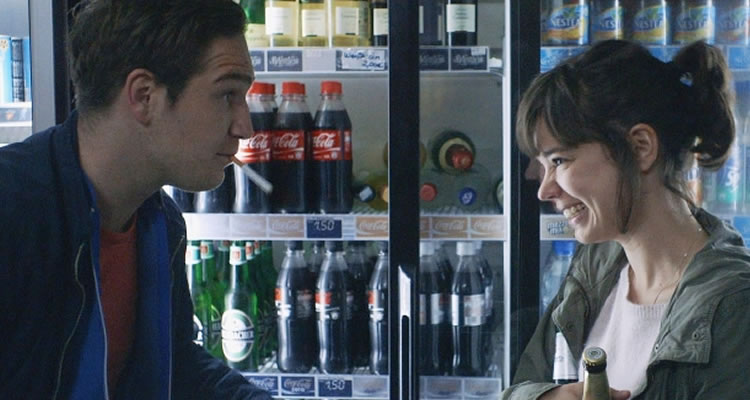 VICTORIA (Germany/15A/134mins)
Directed by Sebastian Schipper. Starring Laia Costa, Frederick Lau, Franz Rogowski, Burak Yigit, Max Mauff.
THE PLOT: One unremarkable night in Berlin, Victoria (Laia Costa) meets four men in a nightclub. Not wanting to go home just yet, Victoria goes for a drink with Sonne (Frederick Lau), Boxer (Franz Rogowski), Blinker (Burak Yigit) and Fuss (Max Mauff). When Fuss becomes to drunk to even stand, Victoria is drafted in by her new friends to drive them to a meeting… This is where the night takes the first of many unexpected turns.
THE VERDICT: If you have heard of ‘Victoria’, chances are you have heard that it is filmed in one long, continuous shot lasting 134 minutes. While this is seriously impressive and adds a certain urgency to the film, this is not the only impressive thing about the film, which is well acted, warm and engaging.
Laia Costa does a wonderful job of holding the film together in the title role. This is Victoria’s story, and it is she that we are on the journey with. Although we learn little about the character through exposition – other than she is a gifted pianist – Costa makes the character playful, fun and strong, and this, as well as the fact that she does not speak German, leaving her out in the cold from her new friends, is enough for us to root for her. As Sonne, Frederick Lau is charming and sweet, and instantly seems to care for the young woman he has just met. As the film progresses and events get out of control, Lau is protective of his new friend, which endears him to the audience. The rest of the cast do well in smaller roles.
The story, written by Sebastian Schipper, Olivia Neergaard-Holm and Eike Frederik Schulz, was scripted at just 12 pages, with much of the dialogue improvised by the actors. There are times when the dialogue seems such, with the small talk between the characters often feeling insignificant in the first half of the film. This improvisation, however, also gives the relationship between the characters a feeling of reality, awkwardness and all.
Director Sebastian Schipper keeps the film moving at a steady pace; seemingly revelling in the first half of the film, which feels very true to the reality of a night out in Berlin, before taking things down a darker past when Victoria’s new friends reveal more about themselves and their plans for the night. Although the running time is 134 minutes, the film never feels drawn out; even the slower scenes are to be enjoyed, watching these new friends become closer, and enjoy one another’s company. The second half of the film changes direction totally – even modes of transport change from bikes to cars – and although it is clear that these characters deliberately find themselves in a dangerous situation, the performances are so rounded and strong that out sympathy always lies with this gang of twenty-something miscreants.
In all, ‘Victoria’ is a testament to the power of risk-taking in cinema. The characters are relatable and warm, the story takes several unexpected turns – even as the dialogue struggles from time to time – and the idea to shoot the film in one continuous take gives the feeling that we are seeing a snapshot in time, and lends weight to the events on screen. Truly remarkable.
RATING: 4.5/5
Review by Brogen Hayes

MAMMAL (Ireland|Luxemburg/15A/92mins)
Directed by Rebecca Daly. Starring Rachel Griffiths, Barry Keoghan, Michael McElhatton, Nika McGuigan, Joanne Crawford, Johnny Ward.
THE PLOT: Griffith’s loner Margaret is happy to keep her circle of activity between her second-hand clothes shop, her daily dip in the local pool, and being alone in her home. Margaret hardly moves outside of her daily routines, but you feel that she may be silently running from something. And when her ex-husband (McElhatton) turns up with news that the son she abandoned all those years ago has gone missing, the news sparks Margaret into offering her vacant spare room to Joe (Keoghan), a feral teen she recently nursed back to health after finding him passed out and bleeding behind her shop.
Soon, these two losts souls are swimming ever closer to one another…
THE VERDICT: Irish filmmaker Rebecca Daly enjoys exploring the spaces inbetween, those moments where nothing is said, and everything is revealed.
It was there in her 2011 feature debut, ‘The Other Side Of Sleep’, Antonia Campbell-Hughes sleepwalking through her life as she struggled with loss in a small midlands town. And it’s there in Daly’s second feature, ‘Mammal’.
A hit on the festival circuit since debuting at Sundance last year, and co-written by Daly once again with Glenn Montgomery, Mammal is a film that offers no crashes or bangs, and only a handful of wallops (well, it is an Irish film, after all). Largely a two-hander, with some fiery support from the mighty McElhatton, the kick here is ‘Mammal”s subtlety.
RATING: 3/5
Review by Paul Byrne