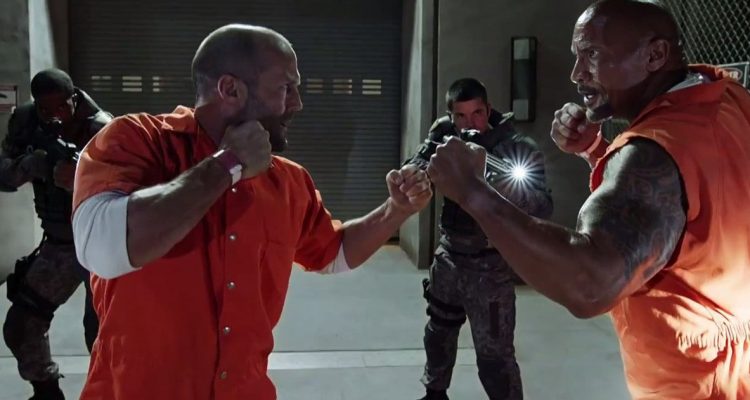 FAST & FURIOUS 8 (USA/12A/136mins)
Directed by F. Gary Gray. Starring Dwayne Johnson, Vin Diesel, Michelle Rodriguez, Helen Mirren, Charlize Theron.
THE PLOT: While on honeymoon in Cuba, Dom (Vin Diesel) meets the mysterious Cipher (Charlize Theron) who forces him to work for her, and turn against his family and crew. The crew, including the newly added Deckard Shaw (Jason Statham) are not about to accept Dom’s change of loyalty easily, and set out to find out just what Cipher is up to, and the hold she has over their friend.
THE VERDICT: It is hard to imagine a world without ‘Fast and Furious’ films at this stage of the game, since we are now facing the eighth film in the franchise. Once again, the world of the film feels very far removed from the one we find ourselves living in every day, and edges closer and closer to being like a Bond film of years gone by.
Most of the cast we know and love – or hate – are back for this new instalment of the ‘Fast and Furious’ franchise, including Vin Diesel, Dwayne Johnson, Jason Statham, Nathalie Emmanuel, Tyrese Gibson, Michelle Rodriguez and Elsa Pataky. These familiar faces are joined, this time out, by Charlize Theron, Helen Mirren and Scott Eastwood. Each of the cast do fine in their roles, but it is newcomers Charlize Theron and Helen Mirren who suffer the most throughout the film. Mirren is struggling through a horrific Cockney accent throughout her few short scenes, and Charlize Theron never manages to get the campy intensity of the film quite right.
Veteran ‘Fast and Furious’ screenwriter Chris Morgan returns for this new instalment of the franchise, and plays with the characters and their relationships throughout the film, while making sure that the late Paul Walker is remembered in the film. The vehicle chases throughout the film are completely over the top and Morgan makes sure that the bar is definitively raised for the rest of the franchise to come.
As director, F. Gary Gray makes sure that the pace of the film is high from the opening segment of the film, where Diesel drives a burning car backward through the streets of Havana to win a race. There is not much character work done throughout the film, but the set pieces are utterly over the top, silly and actually, a lot of fun. The locations – including Havana, Berlin and New York City – look fantastic, the theme of family is front and centre throughout the film, and even though, at over 2 hours long, ‘Fast and Furious 8’ is not brief, it is never boring.
In all, ‘Fast and Furious 8’ is a high octane, over the top and fun film, and it fits in well with the rest of the franchise. The newer actors to the story struggle to fit in with the campy feel created by the others, but it is always a delight to watch Dwayne Johnson be ridiculous on screen. Fans will be delighted, newcomers to the franchise will be lost, but if it is car chases and over the top action you are looking for, ‘Fast and Furious 8’ is the film for you.
RATING: 4/5
Review by Brogen Hayes

THE HANDMAIDEN (South Korea/18/141mins)
Directed by Park Chan Wook. Starring Kim Tae-Ri, Kim Min-hee, Ha Jung-Woo, Cho Jin-woong, Moon So-ri.
THE PLOT: In 1930s Korea Sookee (Kim Tae-ri) is sent to work in the house of a wealthy Japanese man, as handmaiden to the woman he intends to marry – Hideko (Kim Min-hee), his dead wife’s niece. All is not as it seems however, as Sookee is actually working on a scam with a con-man pretending to be a Count (Ha Jung-Woo), who intends to marry HER, have her committed and take all of her money. What Sookee and the Count don’t know, however, is that Hideko has a plan of her own.
THE VERDICT: Based on the novel ‘Fingersmith’ by Sarah Waters, Park Chan-Wook’s examination of love and betrayal in the 1930s, is sumptuous, romantic and full of twists and turns; and even though the film has a whopping 2 hour 25 minute running time, this is almost justified by the winding story told, which keeps audience interest throughout.
The cast is led by Kim Tae-ri as Sookee, and she is great in the role of the outwardly hardy, but inwardly gentle and caring Sookee. Kim Tae-ri makes the character sweet and vulnerable, and since she is so consumed with the secret she is keeping, it doesn’t occur to her that others have secrets of their own. Kim Min-hee is luminous in the role of Hideko. Once again, her performance at the start of the film is something of a misdirect, and it is in the second hour that this actress gets her true chance to shine as a manipulative woman with a softer side. The rest of the cast features Ha Jung-Woo, Cho Jin-woong and Moon So-ri.
The screenplay, adapted from Waters’ book and transported to 1930s Korea by Chung Seo-kyung and Park Chan-wook, is carefully constructed to be surprising throughout the film. The plot constructed by the Count moves at lightning speed, leaving the audience wondering just what is to happen for the remainder of the film, but this is a film divided into three parts; the first is Sookee’s story, the second Hikedo and the third brings everything together. The restart of the story is initially jarring – and this is where the pacing of the film drops – but this is eventually clawed back, and the film only suffers slightly.
As director, Park Chan-wook makes ‘The Handmaiden’ engaging and immersive – slight missteps in pacing aside – and directs his cast to wonderful and strong performances; it is they that make this twisted tale of love and betrayal work as well as it does. The film, as mentioned, is well paced for the most part, although the restart does make a jarring change and the film struggles slightly to recover. That said, the film is beautifully shot, designed and costumes, making the world of ‘The Handmaiden’ feel real, immersive, fun and incredibly sexy.
In all, ‘The Handmaiden’ is a beautiful work from Park Chan-wook, the story is engaging, beautiful and a lot of fun, the film looks great and the performances are strong. Aside from a small stumble in pacing, ‘The Handmaiden’ is a delight.
RATING: 4/5
Review by Brogen Hayes

THE SENSE OF AN ENDING (UK/15A/108mins)
Directed by Ritesh Batra. Starring Jim Broadbent, Charlotte Rampling, Harriet Walter, Michelle Dockery, Matthew Goode.
THE PLOT: Retired Tony Webster (Jim Broadbent) runs a Leica camera store, has a cordial relationship with his ex-wife, and is trying to be more involved with his pregnant daughter’s life, but likes his perfectly ordered world just the way it is. When Tony receives a letter saying an ex-girlfriend’s mother left him something in her will, Tony’s world is rocked as he is forced to remember the actions of his past, and make sense of the present with new information.
THE VERDICT: Based on the novel of the same name by Julian Barnes, and boasting an impressive cast including Jim Broadbent, Michelle Dockery, Harriet Walter and Charlotte Rampling, ‘The Sense of an Ending’ could be an engaging mystery filled with nostalgia and regret for the decisions made in the past. As it stands however, ‘The Sense of an Ending’ lives up to its title, and is drawn out, slow, and never really gives the audience more than a sense of what is going on.
Jim Broadbent leads the cast as the affable but slightly curmudgeonly Tony, and does well in making the character likeable, although the obsession with which he chases down the item he has been left in the will seems a little out of character at first, but becomes clearer as the film goes on. Harriet Walter makes Tony’s ex-wife Margaret a charming character, and the relationship between Broadbent and Walter is sweet to watch on screen. Charlotte Rampling brings a dose of coldness to the film, which is supposed to be mysterious but never quite comes off. The younger versions of the characters are played by Billy Howle and Freya Manor, with Matthew Goode and Emily Mortimer in supporting roles.
Nick Payne adapted Julian Barnes’ novel for the big screen, and while it is obvious he has enjoyed writing the characters in a way that they seem fully rounded and realised, it seems he got twisted up in the book’s mystery, and never manages to pace the film well enough that the audience cares about the resolution of the events from Tony’s past.
As director, Ritesh Batra also struggles with pacing the film in a way that makes the audience want to go on this journey of discovery with Tony. The supporting scenes seem far more interesting than the mystery at hand, with too many holes left for the audience to get a fully rounded feel for just what happened to make Tony so obsessed. That said, the performances are as strong as we might expect from such a stellar cast, but even these are not enough to carry this slow and meandering film.
In all, ‘The Sense of an Ending’ is long, drawn out and ultimately unsatisfying. Broadbent, Walter, Dockery and Rampling do well, but this is not enough for a film that never seems entirely sure what it is trying to say.
RATING: 2/5
Review by Brogen Hayes