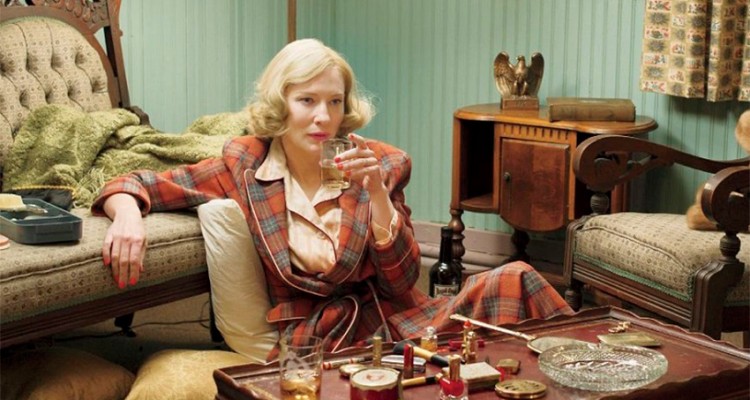 CAROL (UK | USA/15A/118mins)
Diecred by Todd Haynes. Starring Cate Blanchett. Rooney Mara, Carrie Brownstein, Sarah Paulson, Kyle Chandler.
THE PLOT: Therese (Rooney Mara) first meets the aloof but curiously magnetic Carol (Cate Blanchett) when she serves her in an upmarket department store. The two women soon become friends and, as Carol’s divorce from Herge (Kyle Chandler) turns ugly, the two grow closer. Herge, however, is unable to let Carol go, and begins to use her relationship with Therese as a weapon in their divorce.
THE VERDICT: There has been much talk of CAROL for some time now, so it is hardly surprising that this tale of forbidden love in 1950s America was one of the most highly anticipated films at this year’s Cannes Film Festival.
Blanchett is on enigmatic, engaging and slightly scary form as the title character, making the character aloof and beautiful, with a feeling of a shark circling Mara, and a layer of vulnerability not far below the surface. Mara is perhaps the best she has ever been as Therese, the young ingénue who knows she doesn’t want to marry her boyfriend, but is not always quite sure why. The chemistry, affection and respect between Blanchett and Mara runs deep on screen and they are a joy to watch together. The rest of the cast is made up of Kyle Chandler, Sarah Paulson and Carrie Brownstein in a small role.
Phyllis Nagy’s screenplay, adapted from Highsmith’s novel, is careful in its portrayal of a romantic relationship between two women, never straying into gratuity, but making the connection between the two feel real and honest. The dialogue creates a shiny layer on the surface of the film, which is allowed to crack from time to time, and show the vulnerability and fear inherent in these characters.
As director, Todd Haynes makes the world of the film beautiful and rich, but fills it with shadows and secret corners. Haynes makes Blanchett and Mara’s characters and performances the heart and soul of the film, but it is truly with Blanchett that the film lives and dies. In fact, when Blanchett disappears from proceedings in the second act, she seems to take the pacing with her, meaning the film drags its heels for several minutes, before recovering when she returns. The film has touches of great love stories of the past, calling to mind classics like DOCTOR ZHIVAGO, CASABLANCA and THE AGE OF INNOCENCE. Edward Lachman’s cinematography, Carter Burwell’s music and Judy Becker’s production design all enrich the film, making this world feel at once familiar and completely new.
In all, CAROL is a powerful and engaging look at a same sex relationship in 1950s America, and the toll it takes on those involved due to attitudes at the time. Blanchett and Mara light up the screen; every touch is sensual and every glance speaks volumes. The production design is lavish and sumptuous, and Lachman’s cinematography is warm and beautiful.
RATING: 4/5
Review by Brogen Hayes

BRIDGE OF SPIES (USA|India|Germany/12A/141mins)
Directed by Steven Spielberg. Starring Tom Hanks, Mark Rylance, Jesse Plemons, Alan Alda, Amy Ryan.
THE PLOT: During the Cold War in 1957, a Soviet spy named Rudolf Abel (Mark Rylance) is caught in Brooklyn, and charged for his crimes. Insurance lawyer Jim B. Donovan (Tom Hanks) is drafted in to represent Abel, to ensure he gets a fair trial. After convincing the judge that Abel should not be put to death for espionage, and after a U-2 spy plane is shot down over Russia, Donovan travels to Berlin to negotiate a prisoner exchange between the two countries.
THE VERDICT: Based on the true story of Jim B. Donovan, pilot Francis Gary Powers, Rudolf Abel and a US student in Germany who found himself caught up in the negotiations, Frederic Pryor. This is not Tom Hanks’ first foray into Cold War drama, and it has all the feel of a Steven Speilberg film. Although the running time is a whopping 141 minutes, ‘Bridge of Spies’ is almost always engaging, even when it becomes complicated and meandering.
Tom Hanks, as usual, is on wonderful form as Jim B. Donovan. Hanks plays the character like he is the embodiment of all the best parts of America; patriotic but not radical, fair, and concerned with the well being of his fellow man. Hanks is engaging and endlessly watchable on screen, and makes Donovan the heart and soul of the film, as he fights to do the right thing, even if it is not the popular thing. Mark Rylance is wonderful as Soviet spy Rudolf Abel; endlessly calm and pragmatic, and consistently wondering if worrying would help make things different. The rest of the cast is made up of Alan Alda, Jesse Plemons, Domenick Lombardozzi and our own Eve Hewson turning up.
The screenplay for the film was written by Matt Charman and Joel and Ethan Coen, and is based – as mentioned – on real events. The first hour of the film focuses on Rudolf’s trial, the hardships endured by Donovan for representing a spy, and the gentle respect that grows up between the two men. The remainder of the film casts a wider net, with Donovan going off to Berlin to negotiate in secret, and trying to sort lies from the truth. This, after the U-2 plane is shot down in graphic detail, is where the film begins to meander, and get caught up in the depths of the politics going on at the time.
Director Steven Spielberg has created an intriguing film that explores the depth of danger during the Cold War, and is perhaps one of the first narrative feature films to show the Berlin Wall actually being built. Among all the intrigue and engrossing performances, there is a slightly muddled feel to ‘Bridge of Spies’ however, with the 141 minute running time only serving to muddle things further and drag things out. Thankfully, Tom Hanks and the rest of the cast are engaging enough to keep audience interest.
In all, ‘Bridge of Spies’ is an engaging and well-acted Cold War thriller. Rylance and Hanks are engrossing in their roles even though the running time is a little too drawn out, the politics slightly dense and the final moments of the film just sentimental enough to be considered truly Spielberg-ian.
RATING: 4/5
Review by Brogen Hayes

THE GOOD DINOSAUR (USA/PG/100mins)
Directed by Peter Sohn. Starring the voices of Jeffrey Wright, Frances McDormand, Jack Bright, Raymond Ochoa, Steve Zahn, Peter Sohn.
THE PLOT: What if, 65 million years ago, that meteor shower missed our little blue planet, and the dinosaurs just kept on evolving? And what if, a few million years later, these dinos had evolved enough to farm small patches of land in Marlboro country, using their noses to plough the fields, and building stone-walled pits to store their corn?
Well, wonder no more, my fat friends, for that’s where we quickly find ourselves here, with Poppa (voiced by Wright) and Momma (McDormand) the proud parents of three cute little stereotype kids. The shy and awkward one, Arlo (Ochoa), soon finds himself on a long, soul-searching journey home after he gets swept away by the river – and this not long after he witnessed his father drown. Befriending the little human critter (Bright) who sparked the chase that led to his father’s death, Arlo learns all sorts of life lessons as he slowly makes his way home across land…
THE VERDICT: Are you ready to be heartbroken? Well, not quite heartbroken. If it had been made by any other studio, ‘The Good Dinosaur’ would be a fine, funny, inoffensive animated family film, the result of some desperate marketing executive deciding that ‘The Lion King’ would be better told with hillbilly dinosaurs. But, this is Pixar, animation’s Beatles, and having just got back on the horse with Pete Doctor’s incredible ‘Inside Out’, it seems almost perverse that a film as traditional and derivative as ‘The Good Dinosaur’ would come next, from the studio behind ‘Toy Story’, ‘Finding Nemo’, ‘The Incredibles’ and so many other modern animated classics.
Mind you, this is the studio that also gave us ‘Cars 2’. And ‘Cars’. And ‘Monsters University’. And the almost-great-but-not-quite Brave. But, hey, every Beatles is allowed a Magical Mystery Tour, or two. Just don’t give us sequels to such so-so offerings.
Mind you, it’s highly unlikely we’ll witness another round of ‘The Good Dinosaur’, a film that looks fine but never quite fantastic, and has jsut about enough decent gags (every Irish mother is pretty much a Dreamcrusher) to keep you chucking for half an hour. Just about.
The fact that the photorealistic reproductions of Wyoming and Montana are populated here by distinctly rubbery, unphotorealistic dinosaurs is an odd artistic choice too. These dinos look like they’re only halfway through the rendering process.
So, yeah, this is Bonanza with Brontasauruses, a mildly bizarre John Ford’s ‘Jurassic Park’ mash-up, and it will most likely keep the young’uns happy. But, for animation fans, this will be more Don Bluth than Pixar. Maybe Mater just dreamt the whole thing…?
RATING: 3/5
Review by Paul Byrne

BLACK MASS (USA/UK/15A/122mins)
Directed by Scott Cooper. Starring Johnny Depp, Joel Edgerton, Benedict Cumberbatch, Dakota Johnson, Peter Sarsgaard, Jesse Plemons.
THE PLOT: We open on former members of Boston crime boss James ‘Whitey’ Bulger’s notorious South Boston-ruling Winter Hill Gang confessing all to their captors, their stories launching the flashbacks to the 1970s and 1980s – and a spectacular rise and fall. We open on Bulger’s Irish-American operation competing with their Italian-American counterparts, a murder lighting the spark just as the crime boss’ old childhood friend, John Connolly (Edgerton), approaches him with an FBI offer that’s hard to refuse. In return for information on how to bust the Italian-American mafia in South Boston, Whitey and his gang will get protection. And so it goes, and goes, until the inevitable greed and sense of entitlement on both sides of the law starts to put a strain on all those within a 50-mile radius. The fact that Bulger’s brother (Cumberbatch) is a state senator.
THE VERDICT: With his blockbuster days now firmly behind him – how many flops has it been now? – Johnny Depp wisely retreats to his old character actor roots with ‘Black Mass’. Looking far more like Hunter S. Thompson – especially the Garry Trudeau version – than Boston baddie Smiley Bolger, Depp nonetheless delivers here. And the Elvis effect works in his favour. The complexities of a man who was both a vicious thug and a Robin Hood suits our leading man’s current limbo state off-screen, Depp caught between the aftermath of over-exposure and bad blockbusters, and the uncertainty that he will ever be able to reclaim that hard-earned credibility the actor had built over twenty years. Before shaking hands with Jerry Bruckheimer.
The fact that Depp is playing a truly fascinating character here helps, Bolger being one of those American anti-heroes who, despite living a life of crime and brutal violence, ended up being a cool t-shirt.
Directed by Scott Cooper – who gave us the one trick pony that was ‘Crazy Heart’ – Black Mass hits all the expected notes, the American true-life gangster pic being pretty much a solid gold blueprint at this point. The fashion, the cars, the soundtrack, the grey-haired mum, the hurt hottie girlfriend, and so on. Nothing wrong with a good formula, of course, and everyone here plays to their strengths, especially Joel Edgerton as Whitey’s good-cop-goes-bad-cop partner-in-crime, John Connolly. The South Boston accents all suck though.
RATING: 3/5
Review by Paul Byrne