New Irish movie RED ROOM will be released for a special screening on October 31 at Movies@Swords and Movies@Dundrum and at the Gate Midleton Cinema in Cork on November 8th. The horror tells the story of Kyra, whowakes up in a locked room with two other women, Alison and Lily,their captors keep them healthy with small meals and vitamins yet continue to hold them hostage , Why ? and what is the Red Room that they keep overhearing about . 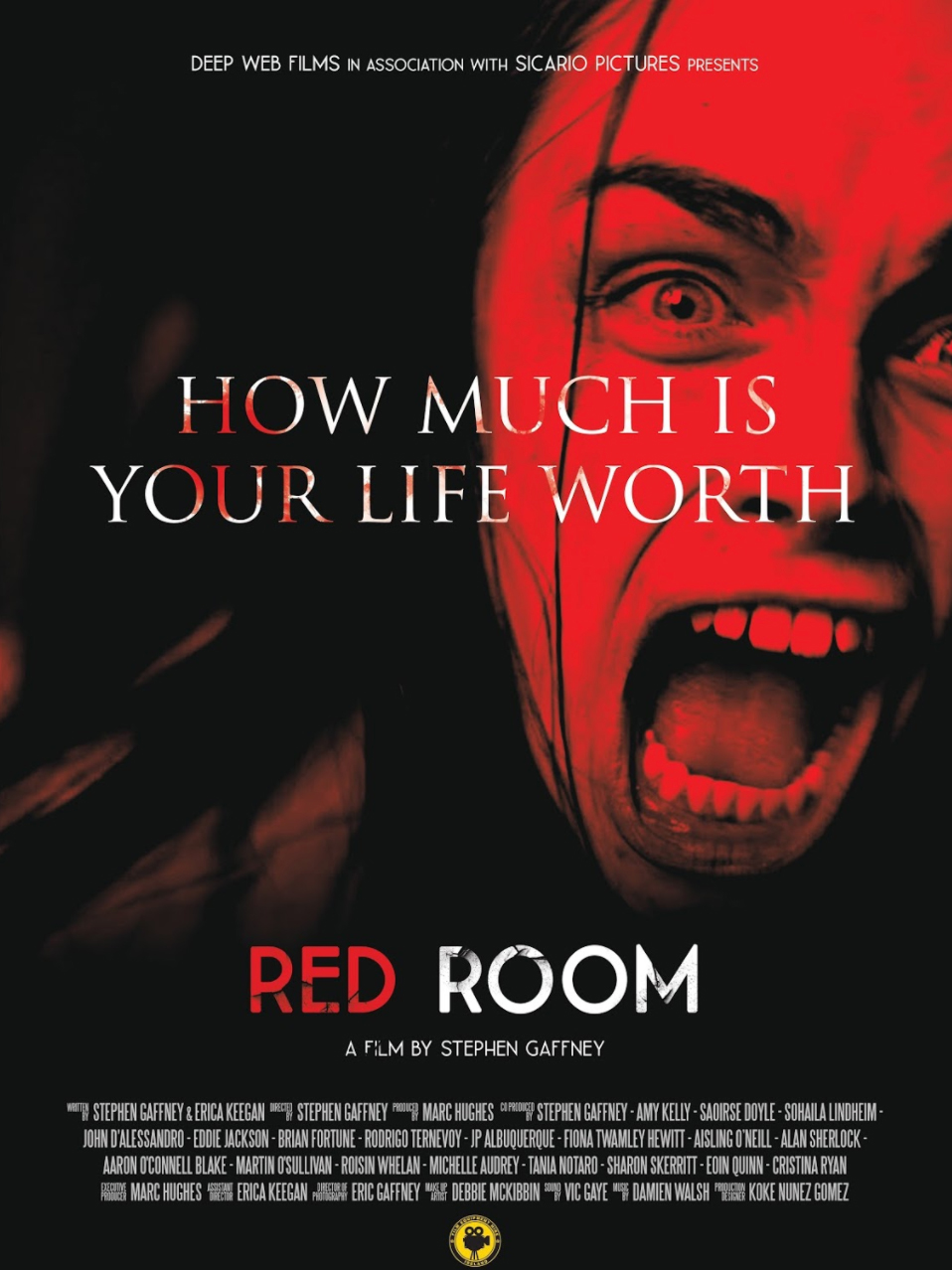 Congratulations on ‘Red Room’… how did the project begin?
I first came up with the story for Red Room in 2012. At that point I did not even begin making films, shorts or features. I had written dozens of scripts but never produced any of them. I then decided to go to college to study film. I made two no budget features Bully and Class A in the hope of getting a producer on board to help make Red Room. After making the two features I received good feedback from critics and then approached producers with the concept of Red Room. This would have been early 2015 before I talked to numerous producers with a synopsis. Once I gain their interest, I wrote the first draft in a few days, which was relatively easy because I had the idea in my head for years. The lead character is female so I asked my girlfriend, Erica Keegan, to look over the script and work wit me on the characters. We then began writing it together and we went into production mid 2015.

How did you begin writing scripts and how did get into the world of film making?
What got me interested the word of film making was seeing The Exorcist for the first time at about ten years old. It frightened the life out of me, it is still the only film that scares me today. When I matured a little bit I began reading all about the making the of the film and I was hooked. I decided then I wanted to make films. I would have been about fifteen when I wrote my first script. I never showed it to anyone. I can’t even remember what it was about. But I was constantly writing from the age of fifteen.It became sort of an addiction, I literally can’t stop writing. Every night when going asleep I try come up with new ideas for screenplays. Even when turned down for funding etc. I’d say I give up trying, the usual. Then within the hour I am rewriting or writing a new project. I can see myself doing this forever.

You mentioned previously that early in your career you weren’t keen on having anybody read your work out of fear of criticism. How did you bypass this to grow as a scriptwriter.
I used to talk about films 24/7, saying I always wanted to make one. I had my then girlfriend driven mad about this when she finally snapped and said ‘just do it, then!’. I showed her a script I wrote ( Long Term ), the first time I ever showed anyone anything I had written and she liked it. I knew she wasn’t lying when I showed her the second one and said she she didn’t like that.

You made your first short in 2014, how difficult was it to get that off the ground?
It was actually relatively easy. My brother Eric and sister in law Amanda Brien just finished making their own short. I contacted Eric and asked him would he do camera and he agreed when he read the script. The film was all set in one location and only had two character’s.  Getting the production off the ground was easy but actually making it really opened my eyes that I would need a ton of help to make Red Room, which was my goal to get produced. I then decided to go to college and throw myself in at the deep end and make my first feature.

Your idea for ‘Red Room’ was to make an Irish film that had never been done before, how did you set out to achieve that?
I set out to make a horror film that would watched worldwide instead of concentrating on the Irish film market like I did with my previous two features. If American indie films can be known worldwide I don’t see why an Irish indie film can’t do the same. I set out to make something completely different that you normally see from Ireland, a hardcore horror film that doesn’t pull any punches. Saying that, the film is not just a shock gore fest, there is the high concept of the Red Room and subplots. The film is more character driven than just shock value.

How difficult was it to get funding for an Irish horror film?
I gave up on crowd funding and set out to make another feature Class A to show to potential producers. That film was made on a shoe string budget and my approach to producers was ‘I made this for three hundred euro, let me show you what I can do with a bigger budget’. Thankfully this worked and Red Room is now complete.

You tried crowd funding for the film, how was that process?
I started an funding campaign which failed. It raised something like five euros which was way off the mark. We shot a little promo for the page and we didn’t reach our goal. The promo is not available online now but will be on the DVD release. To be honest I can’t see myself crowd funding again. Not myself personally. If a producer wants to do it they are more than welcome to if they think it will work.

What do you think of the popularity of horror at the moment with films like IT becoming massive box office hits?
I don’t think horror has ever been unpopular. Obviously IT has broken records, but I think that plays mostly in hand to fans of the original book it is based upon; promising to be close to the famous source material as possible. I have not seen it myself yet so I can’t really comment about that film in particular. I think horror is a genre that will always be successful and I think it’s great. It is my favorite genre and I’ll always support it.

Can you tell us about the casting process?
Casting the film was relatively easy. We held auditions for one major role, which went to the very talented Sohaila Lindheim. She showed fantastic interest in her character and blew us away with her audition. We cast Amy Kelly as the lead very early on in the writing process. I called her, pitched the film to her, and she loved it. We were able to then write and edit the script with her in mind. I could go on and on about the cast. Their performances truly speak for themselves. It was great to see each of them really become their characters and give it their all. Co-writing the film was an added bonus which really helped me in the directing process. With Red Room, I knew exactly what the actors needed to bring to their role. Every single one of them had extremely hard roles to play and they completely exceeded my expectations.

What films, writers and directors have influenced you?
Visually, Stanley Kubrick and David Fincher would definitely be my biggest influences. Nicolas Winding Refn, Martin Scorsese, William Friedkin… there’s too many directors to list. Writing wise, I try steer away from every other writer as much as possible. I write what I want to see and hear on screen, which is usually different from the norm. Saying that, I’ll always be compared to some screenwriter or another. That is just purely coincidental as I write for the screen, I don’t imitate others for the screen.

What other genres do you enjoy besides horror?
Crime films and dark thrillers. My favorite film of all time is Goodfellas. Leaving horror out of the equation the likes of Goodfellas, Casino, A Clockwork Orange, se7en, Fight Club and more recently Legend would be my idea of a good film night. I am a huge fan of extreme dark comedy which all the films mentioned above have, so that’s always something I enjoy watching.

You’ve managed to secure a cinema release for the film for Halloween, was that a challenge for an independent film?
Not easy at all. Red Room was a very hard shoot. It took a year to film. Then a few more months to edit, score etc. Once that was complete i thought the hard work was over. It was then we had a film made that we were very proud of, but we had no idea what to do with it. We certainly did not want it to fade away quickly. So myself and producer Marc Hughes got in touch with PR Anna Lavery who made the whole process run very smoothly. It’s still a bit surreal that it is going to be shown in cinemas.

How much work was done in post production on sound/special effects to bring the film up to a cinema release standard?
A lot. I must have watched the film over fifty times to ensure everything was working. The edit came together nicely. Sound design and sound mix was probably the most tedious part of post production. The film was shot with 5.1 surround sound in mind so a lot of work went into that. Having watched it in the studio I can say it looks and sounds great, beyond my original expectations. The score was done fairly quickly by composer Damien Walsh, has composed all my features so far. The score was extremely important to the film’s graphic scenes to make the viewer feel uncomfortable and i am extremely happy with how it sounds.  Most of the special effects where practical and done on set. i didn’t want to use digital at all as I am a fan of old school horror films. However one scene had to be done digitally for reasons I can’t say without giving away a major plot point. I can say though that I am extremely happy with the effects in the film.

What advice would you give to anyone thinking of getting into film making?
Do a lot of pre-production. Anticipate for everything to go wrong. Be prepared to be told no more than yes at a ratio of 100:1.

Surround yourself with a cast and crew that are positive and want to be involved in the project.

And don’t think because you make a film you’re going to become a millionaire over night, you’ll most likely end up spending more money on the film than making it. But back to the cliche, don’t give up. Keep moving forward and don’t take no for an answer. It’s a cliche because  it is true. If I gave up when i hit the first hurdle I wouldn’t be seeing my name on a cinema screen soon.

Finally, whats next for you?

I am co producing two short horror films at the moment; Iris by John McGovern and Sleepless by Debbie McKibbin, two very talented writers. Directing wise, what is immediately next is a supernatural horror / thriller.  There are a few projects in the pipeline after that, I can’t say much at the moment really, but I can say I am really looking forward to directing them.