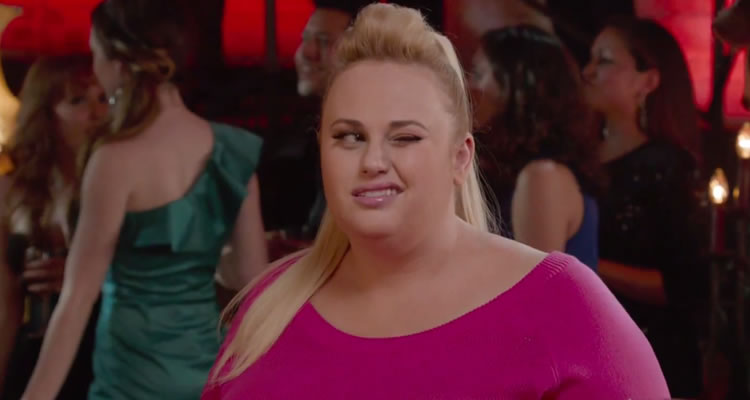 We’re not going to get into the whole “Are women funny?” debate thing because (A) it’s stupid, of course they are, and (B) Hollywood is currently being devoured whole by comediennes, putting most of the funny men to shame. Be it the all-female ‘Ghostbusters’, Fey and Poehler being the best awards show hosts ever, Judd Apatow’s upcoming feature ‘Trainwreck’ starring so-hot-right-now Amy Schumer, or the much loved Rebel Wilson, an actress who seems to have come from nowhere and is now everywhere, while managing to completely win over audiences all around the world.

Kicking off her career with sketch-show ‘Pizza’ (think an Australian version of ‘Little Britain’), Wilson also wrote, produced and starred in several musicals for the Sydney Theatre Company, making her an instant hit in her home country. In 2003, she visited the US and studied with The Second City, the same improv centre that moulded the likes of Steve Carrell, John Belushi, Dan Akroyd, Julia-Louis Dreyfus, Amy Poehler, Tina Fey and loads more besides.

In 2010, she landed her first US TV role in sit-com ‘Rules Of Engagement’, and soon afterwards she appeared in stoner-comedy ‘Workaholics’. Of course it was most likely her role in 2011’s ‘Bridesmaids’ when she was properly introduced to the world at large. Playing the rude and newly tattooed sister of Matt Lucas who eventually forces poor Kristen Wiig to move out their apartment and back in with her mother, even with her limited screen-time, all she really needed was an open bag of frozen peas to have us laughing in the aisles.

After that Wilson popped up in a number of low-key comedies, all seemingly connected with the theme of starting a new family: first there was ‘A Few Best Men’ dealing with a stag’s party in the Australian Outback, then there was ‘Bachelorette’ with Kirsten Dunst, Isla Fisher and Lizzy Caplan which was basically a darker version of ‘Bridesmaids’, and then there was ‘What To Expect When You’re Expecting’, a film that featured about half of the known world, but still Wilson managed to leave a lasting impression.

In 2012 she featured in no less than SIX cinematic releases, but while some of them managed fly completely under the radar – you’d be hard pressed to find any fans for the likes of quirk-filled oddity ‘Small Apartments’ or literary blackmail dramedy ‘Struck By Lightning’ – it was also the year she had two of her biggest hits to date. First up was voicing the rough kangaroo pirate Raz in ‘Ice Age: Continental Drift’, which wound up with over $875 million at the worldwide box office, and then there was ‘Pitch Perfect’. Playing the self-named Fat Amy, we loved Wilson and the rest of The Bella so much that the sequel was green-lit almost immediately.
Since then we’ve seen Wilson take small parts in big movies, like Michael Bay’s ‘Pain & Gain’ or acting alongside Ben Stiller in ‘Night At The Museum: Secret Of The Tomb’, but looking forward to 2016, and its set to be her biggest year yet. She’ll be going to war with her best friend Amanda Seyfried over an ex-boyfriend in ‘The Social Life’, taking part in spy comedy ‘Grimsby’ with Isla Fisher, Penelope Cruz and Sacha Baron Cohen, joining an all-star cast for grown-up dramedy ‘How To Be Single’, and providing voice-work for sure-fire hit ‘Kung Fu Panda 3’.

Before then, we’ll get to see her perform as Fat Amy once again, as ‘Pitch Perfect 2’ which hits Irish cinemas this month. Will there be anything as good as that cup scene from the first one? We definitely hope so. Fingers crossed, Pitches!