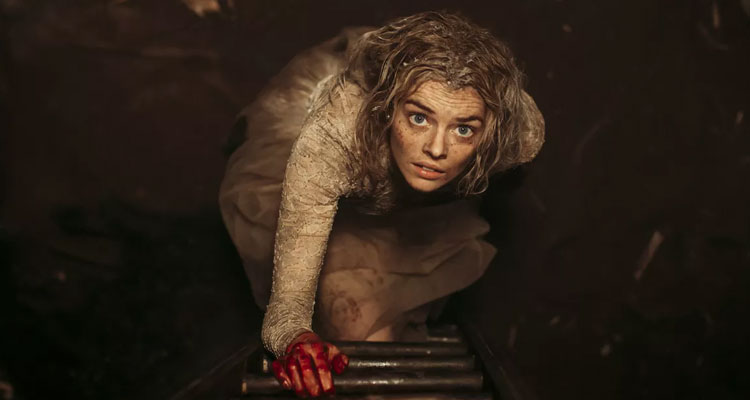 The Plot: Grace (Samara Weaving) is about to marry Alex (Mark O’Brien) at his family home. He is the proposed heir to the Le Domas family dominion, an empire built on sports and board games. This family likes to play… and they have something special in mind for Grace. At the stroke of midnight, a family tradition is played when a game is selected for them to play with their new family member. It turns out to be hide and seek, which sounds innocuous enough. But when the family start arming themselves with vintage weapons, it turns out to be more like hunt and kill. Alex’s father Tony (Henry Czerny), mother Becky (Andie MacDowell) and brother Daniel (Adam Brody) regard Grace with snide disdain, but she turns out to be more resourceful than they thought…

The Verdict: Let’s play a game… The kind that Jigsaw might approve of – and might also get some chuckles out of too. What if your wedding night turned out to be a fight for survival against a bunch of rich, self-important but not too bright new in-laws? That’s the basic premise behind Ready Or Not. It’s one of the year’s stand-out horror-comedies, a wildly inventive and frequently funny film that pokes fun at the Agatha Christie-style trappings (more of that to come in this autumn’s Knives Out) while also playing to the expected conventions of the horror-comedy. It sits comfortably in the same bloody vein as You’re Next, given that it involves a young woman lashing back at the privileged people who regard as her as little more than human prey for their late-night gaming entertainment.

The clever trick behind Guy Busick and Ryan Murphy’s script is not to take the Le Domas family too seriously, while amping up Grace’s survival instinct to make her smarter than she initially appears. The family regards her with mild disappointment early on, saying that Alex could have done better. Grace is no dumb blonde though and that’s due in no small part to Samara Weaving’s tremendous, guts-and-all performance. The niece of Hugo Weaving may be mostly unknown at this point, but the film revolves around her and she anchors it with enough gusto and primal scream humour for this to be a star-making turn. The family are credible if somewhat hollow threats, but their dubious aiming would leave even an imperial stormtrooper shaking his head in shame. That’s part of the fun of the film, as Grace uses ‘friendly fire’ and maimed bodies start mounting up like pawns on a blood-smeared chessboard.

Co-directors Matt Bettinelli-Olpin and Tyler Gillett have previously worked on horror anthology films and the forgettable Devil’s Due, but here they have really hit their stride. They’ve found an archetypal horror set-up and played around with it to devilishly demented effect. There is something otherworldly going on here in the background, but they keep the audience guessing right through to the end as to the real purpose of Grace’s ordeal. All the actors are game for the kill here. Even the sight of the usually composed and graceful Andie MacDowell losing control and going for the jugular is a delightfully twisted piece of against-type casting by the co-directors. There’s a nice line in jet-black humour throughout the film, character reversals which might surprise an audience and plenty of blood and gore to keep horror fans sated. Ready Or Not may have plenty of laughs, twists and turns but it’s the character of Grace and Weaving’s gutsy performance behind her that is most memorable. It has a killer closing scene too and could be a future cult classic in the making. Playing this most dangerous game comes highly recommended.