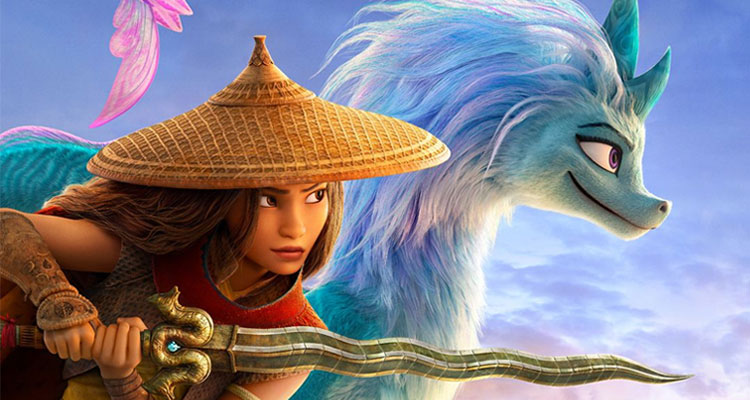 The plot : 500 years ago, the bountiful land of Kumandra was beset by evil chaotic demons known as the Druun but the remaining magical dragons sacrificed themselves to save the people. When Raya’s father attempts to reunite the fractured country, a terrible tragedy places her on a quest to find the last dragon and restore all that has been lost.

The verdict : From the first moment we meet newest Disney princess Raya (Kelly Marie Tran) as a little girl serving us Tomb Raider style smarts in a thrilling introduction, it’s clear that she is a modern heroine. Smart, skilled and warmly sarcastic, she is an instant role model for the pandemic generation, completely with tiny (to begin with) adorable pet slash best friend Tuk Tuk (Alan Tudyk)

When everything goes predictably wrong in the first 15 minutes (come on, this is a Disney movie), the story skips on 6 years and we meet a teenage Raya on a quest to find the last dragon (an enthusiastic Awkwafina) and restore the land to its former glory.

There will be inevitable comparisons to Mulan as Disney has given us another ass kicking Asian heroine and an annoying talking dragon sidekick but don’t let that stop you. This film is trying to do something quite different with its cast of hopefully loveable weirdos. Raya and the last dragon is a curious mix of very obvious storytelling and extremely random choices that would feel more at home in anime or a Dreamworks title.

On her mission to collect dragon stone fragments from each of the five realms left when Kumandra schismed, Raya unwittingly assembles a motley crew of prepubescent chef, cutthroat, conman baby with animal sidekicks (yes you read that correctly) and the naive and trusting titular dragon herself. It’s rare to see a group caper in Disney and this has some great homages to Mission Impossible which is not a sentence I ever expected to say about a Classic Disney princess movie.

There are chases, slapstick fights and shenanigans galore which kids are sure to enjoy as well as more adult clashes between Raya and the woman who betrayed her.

There is a lot to enjoy here. From the absolutely stunning production design which takes different parts of southeast Asian cultures and mixes them into a fantasy hodgepodge (which may annoy some viewers familiar with the cultures being pilfered) to the incredibly beautiful animation and particularly the lighting which is constantly distractingly good, directors Carlos Lopez Estrada and Don Hall have created a film that can be jaw droppingly beautiful. There is also a mix of animation styles used at the start to tell backstory which is a treat. The design for Sisu the dragon is unfortunately very basic which feels like a shame against the incredibly rich backdrop that the artists have created but I’m sure kids will love her

Some incredibly random choices, very obvious story beats and heavy handed moralising stop this from being a top tier classic but it’s so good to see Disney try and do something new that I can’t help but applaud. The message of trust and openness is one that we can all embrace and is worth drumming into our kids and ourselves.

Raya And The Last Dragon
3.5
Move Over Mulan