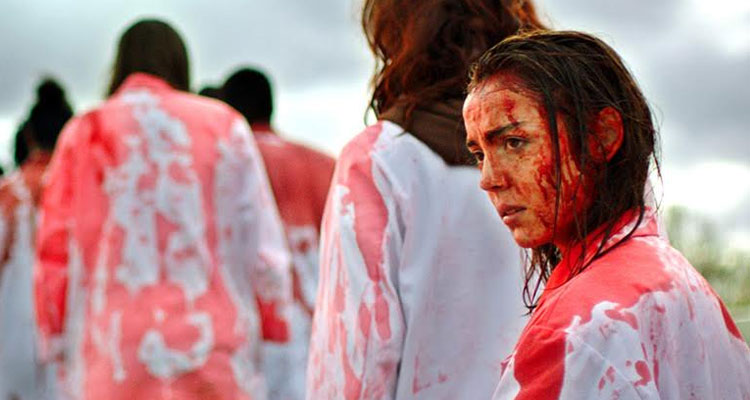 RAW (France | Belgium/18/99mins)
Directed by Julia Ducournau. Starring Garance Marillier, Ella Rumpf, Rabah Nait Oufella, Laurent Lucas, Joana Preiss.
THE PLOT: Justine (Garance Marillier) has been a vegetarian all her life, when she goes through a hazing ritual at veterinarian school however, the young woman finds herself hungering for something more than the diet she has known all her life, something that will have disastrous consequences for her entire family.
THE VERDICT: French Belgian film ‘Raw’ has already been scrutinised after a screening at the Gothenburg Film Festival in Sweden caused people to leave the cinema, but although ‘Raw’ presents itself as a horror film, it is more a coming of age tale, with some unconventional, violent and frankly stomach churning moments thrown in for good measure.
Garance Marillier leads he cast as Justine, and doe a great job of playing a young woman away from home for the first time and overshadowed by her older sister. Dialogue in ‘Raw’ is minimal, but Marillier conveys such emotion through her gaze and body language that more talking would have just cluttered the screen. Marillier also makes easy work of turning Justine from an innocent young woman into a sexually confident young woman, as well as a predator when it comes to what he feels her body needs. The rest of the cast features Ella Rumpf, Rabah Nait Oufella, Laurent Lucas and Joana Preiss.
Writer/director Julia Ducournau has created a film that is a cannibalistic struggle on the surface, but added layers underneath to explain the character and her move away from childhood into adulthood. The allegory is dealt with very subtly, and although statements are made about characters early on in the film, these are allowed to gently blur and shift over the course of the movie. The horror elements of the film are few and far between, but are squirm inducing at the best of times, although surprisingly it is not the eating that is the most troubling, more the purging. There are a lot of questions asked in the film, not all of which are answered, but there is enough given that the audience is not left hungry for more.
In all, ‘Raw’ is a disgusting, thought provoking and decidedly feminist film that just so happens to tell its tale through the metaphor of cannibalism. There are some incredibly nausea inducing moments, but Garance Marillier carries these off with ease and flair. It would have been a more satisfying feast, however, if a little more of the mythology of what is happening to the character was fleshed out further.
RATING: 4/5
Review by Brogen Hayes