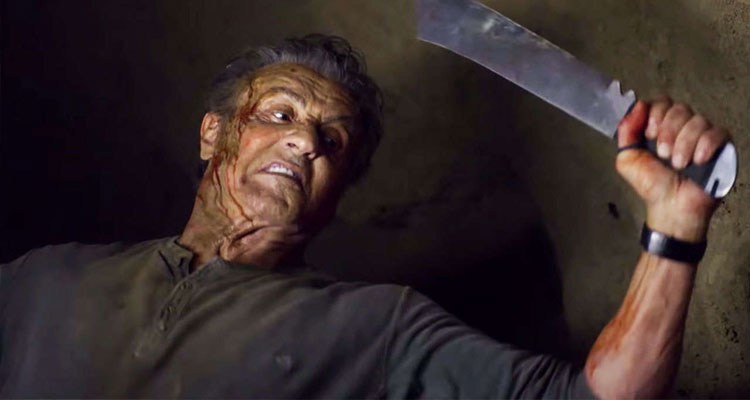 In short: The mighty have fallen

The Plot: Vietnam veteran John Rambo (Sylvester Stallone) has lived through war – on the battlefield and at home. He’s found a quiet life on his ranch near the Mexican border, where he keeps a close eye on his niece Gabrielle (Yvette Monreal). She’s a well-meaning but naïve girl. She wants to find her father in Mexico, despite the fact that he walked out on her and her mother. John advises her against it, but she heads across the border anyway. Bad idea. She’s abducted by a sex trafficking ring run by two ruthless brothers, Victor (Oscar Jaenada) and Hugo (Sergio Peris-Mencheta). John is once again drawn into conflict as he tracks her down in Mexico. This time though, he’s bringing the war to his own turf…

The Verdict: Late last year, Sylvester Stallone officially retired his Rocky Balboa character. It’s a sign that the 73-year-old action star is acknowledging his advancing years, but wanted to give fans one last glimpse of the fading boxing hero. With that in mind, he’s done the same sign-off with his other signature role – John Rambo. The Rambo action series, which began in 1982 and had the most recent entry in 2008 now continues / concludes with Rambo: Last Blood. While the aging Rocky involved more introspection and regret, Rambo is back to his internal Hulk-like rage and creative ways of killing people in the name of good. Not that you can blame him. The events of Last Blood are grim stuff indeed, made even grimmer by the liberal bloodletting and violence, which reaches Saw-style levels of gore. But is that enough to justify one last film though?

Not quite. Part of the problem with Last Blood stems from the bog-standard plotting, which you can see coming a mile off and trudges along a very predictable route. It’s a disappointing script from Stallone and his co-writers Michael Cirulnick and Dan Gordon. It only gives brief insights into Rambo’s mind at this late stage in his colourful life, through some grumbly narration by Stallone. Whereas Rambo had an aggressive and out-of-line cop played by Brian Dennehy to contend with in First Blood, here he has sleazy one-dimensional Mexican sex traffickers who treat their ‘merchandise’ like worthless trash. Cue Rambo punching, stabbing, shooting and dismembering every bad guy in sight as he goes on his roaring rampage of revenge. There’s little in the way of a toll impacting on Rambo’s character development. It’s just another day of death dealing for him.

That said though, the climax is explosive and does deliver the goods in the action department, as Rambo plays a lethal game of Home Alone in his purpose-built tunnels. It’s a reminder of what made Rambo such an effective, burnt-out character in previous films. This continues with an end credits swansong to the character. The third act is more in line with the previous films, so it’s a shame that the rest of the film is unable to keep up with it and just squanders the character in dull scenes that just move him from point A to point B. There are plot holes galore here, about as big as the holes in US/Mexican border security which the film conveniently ignores to keep the plot moving and under 90 minutes. Adrian Grunberg’s direction is workmanlike throughout, with no distinguishing flourishes. How the mighty have fallen. Rambo: Last Blood is off target and does not give this great character the proper send-off he so surely deserves. A meek salute is all that it can muster.