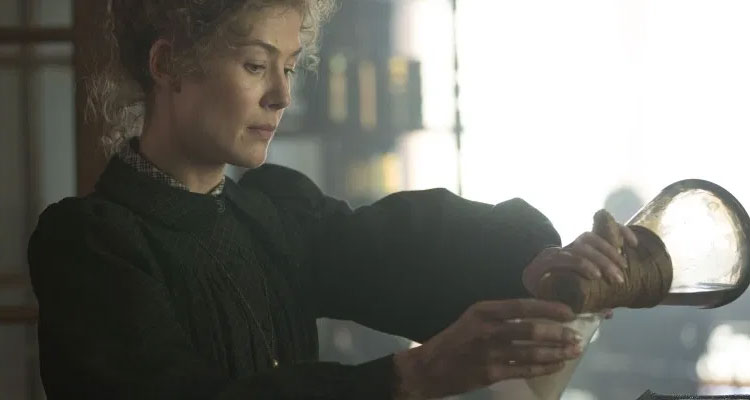 The Plot: Paris, 1893. Polish scientist Marie Sklodowska (Rosamund Pike) arrives in the city intent on furthering her career. Thinking outside of the box, she challenges the accepted scientific beliefs of the age, battling sexism and defiantly preferring to work alone. That is, until she is approached by Pierre Curie (Sam Riley). He recognises her talents and proposes a collaboration of equals, working together to improve their world. Hesitant at first, she accepts and they later fall in love and marry. Marie discovers two hidden elements in atoms – radium and polonium. Together, they present their findings to the scientific community and attempt to harness the power of radioactivity to further mankind’s knowledge, for better and for worse…

The Verdict: Scientist Marie Curie stands as a giant not just in the 20th Century but in any age. Her scientific discoveries involving radioactivity and her collaboration with husband Pierre allowed it to be used in life-saving X-rays, cancer treatments and more. Of course, radioactivity was weaponised just over a decade after her death in mushrooming clouds over the devastated landscapes of Hiroshima and Nagasaki. It’s an intelligent and sensitively made depiction of a maverick woman who defied conventions and didn’t care what people thought of her. She only cared about her family, her work and how it could be of vital use to society. Iranian director Marjane Satrapi takes an unconventional approach to this story, so that it becomes a film about both the development of radioactivity and as a portrait of a woman not being confined by gender barriers.

It’s adapted by Jack Thorne from the graphic novel by Lauren Redniss. The graphic novel origin of the script allows Satrapi to play around with the conventions of the biopic, making it as much a visual journey through four decades as a personal one – and beyond. The unusual structure works to the film’s advantage, flashing forward at select moments to show the audience how Marie Curie’s discoveries changed the world – whether that’s cancer treatments, X-rays or atomic-age testing on simulated towns in the Nevada desert. Satrapi is careful enough to distance the darker uses of radioactivity from Marie’s ingenious work. How it is ultimately used for warfare is something for others to answer.

The film radiates humanity from early on and right through to the moving conclusion. Rosamund Pike’s carefully-judged performance captures Marie’s unbreakable spirit and firm belief in the value of scientific progress. She might have come across as distant and work-focused but for her relationship with Pierre, a forward-thinking early 20th Century man who treated her as an equal as she went on to win two Nobel prizes. Their successful marriage and working relationship is at the core of the film, with Sam Riley responding in kind to Pike’s noble, fully three-dimensional performance. When Marie becomes the main focus in the third act as time moves forward, there’s a wonderful realisation as all the pieces fall neatly into place and we understand why she secured her place in history.

It’s a much more focused effort from Satrapi, whose last film The Voices was an oddball mess – but a fascinating one at that. Radioactive is a visual and aural treat, with a distinct visual style that marks out its territory along with a haunting and evocative modern score by Evgueni and Sacha Galperine that doesn’t come across as anachronistic. This is no stuffy period piece biopic but a kinetic and enlightening portrait of a woman who broke down barriers and made a life-changing discovery that reverberates even now.