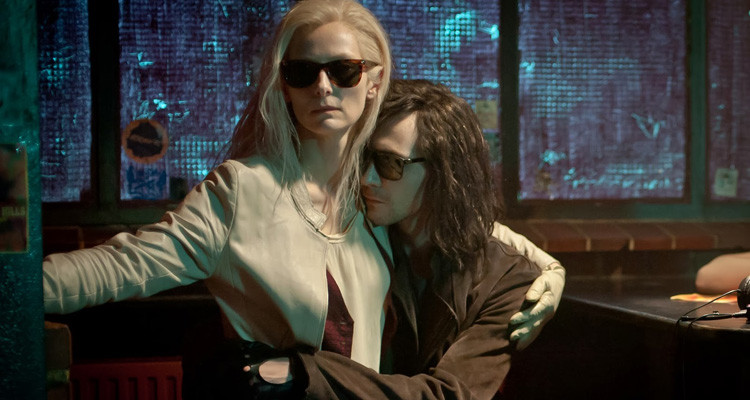 A GIRL WALKS HOME ALONE AT NIGHT – Iran’s first vampire Western – is released in Irish cinemas this week. The film, shot completely in black and white, is set in the town of Bad Cit, where the lonely, cruel and desperate townspeople are unaware that there is a vampire in their midst. Clad in a hijab and riding a skateboard, The Girl (Shiela Vand) stalks the residents and exists in solitude, until she meets the lonesome Arash (Arash Marandi).
The Girl is a quirky character, but a ruthless killer, and with this in mind, Movies.ie has taken a look back at some of the more unusual vampires in the movies.

ONLY LOVERS LEFT ALIVE
Jim Jarmusch’s vampire flick from 2012 focuses on vampires Adam (Tom Hiddleston) and Eve (Tilda Swinton), who have been married for centuries. Unable to be together for long, but also to never be truly apart they reunite at Adam’s home in Detroit to rejuvenate one another and celebrate their love. When Eve’s vampire sister Ava (Mia Wasikowska) arrives on their doorstep, however, she throws their carefully ordered world into chaos and threatens their very survival.
Just when the world reached peak vampire with the end of the TWILIGHT saga, Jim Jarmusch sent us back into the world of the bloodsucking undead with a return to vampires as monsters and hermits, with touches of the romanticism of Anne Rice’s INTERVIEW WITH THE VAMPIRE thrown in for good measure.

SHADOW OF THE VAMPIRE
E. Elias Merhige’s 2000 film puts forward the notion that Max Shreck, who played Count Orlok in NOSFERATU, was actually a real life vampire and not an actor at all. The film focuses on the shoot for NOSFERATU, and the rumours that swirl around the set once Schreck arrives.
SHADOW OF THE VAMPIRE is a quirky take on the vampire myth, and also examines the lengths that a director will go to to make the film he wants to make, and to make it well. Willem Dafoe’s performance as Max Schreck is astonishingly brilliant, and the film as a whole plays the film within a film idea straight, rather than for laughs, making it truly scary and truly great.

DRACULA
When he sees a picture of Jonathan Harker’s (Keanu Reeves) fiancée Mina (Winona Ryder), Count Dracula believes she is the reincarnation of his long dead love, and sets out from Transylvania for England, with the intention to hypnotically seduce the innocent Mina.
Francis Ford Coppola’s version of DRACULA, released in 1992, tires to be a straight adaptation of Bram Stoker’s book, but somehow raises the camp factor; throwing Gary Oldman into blue sunglasses, and giving the film a level of schlock that is both fun, but highly unusual for a movie that’s trying to play it straight. Oldman is on fine form as the title character, but its hard to deny that this campy version of the original literary vampire is a little too unusual for its own good.

WHAT WE DO IN THE SHADOWS
WHAT WE DO IN THE SHADOWS is a mockumentary from one half of FLIGHT OF THE CONCHORDS, Jemaine Clement, and Taika Waititi. The film follows four vampire housemates in Wellington, New Zealand, as they negotiate life together, the world around them and a newcomer brought into their midst.
Fans of FLIGHT OF THE CONCHORDS knew what to expect with WHAT WE DO IN THE SHADOWS, as it is very much in keeping with the innocent feel of the TV show. Jemaine Clement and Taika Waititi have created a film that is awkward, smart and incredibly funny, a film that send up the vampire genre and the vampire myth as a whole, while still managing to be sweet and endearing. WHAT WE DO IN THE SHADOWS is an awkward, over the top, self referential and incredibly funny mockumentary, which channels the comedic spirit of THE RUTLES: ALL YOU NEED IS CASH and THIS IS SPINAL TAP.

LET THE RIGHT ONE IN
The 2008 Swedish adaptation of the book by John Ajvide Lindqvist tells the story of a bullied child who makes friends with his new next door neighbour. Little does Oskar (Kåre Hedebrant) realise that the young girl he has formed such a strong bond with is actually a centuries old vampire.
While it may seem that Eli in LET THE RIGHT ONE IN is not quite a quirky vampire, but a centuries old killing machine, it is worth remembering that Eli’s ability to form meaningful relationships with humans, due to the young age that she was turned into a vampire, is an unusual occurrence in vampire lore. Eli is a careful mix of a lonely innocent and a bloodthirsty killer. Basically, imagine Claudia from INTERVIEW FROM THE VAMPIRE if she was given a chance to grow out of her bratty phase.

Honourable Mentions to: THE HUNGER, THE LOST BOYS and BLACULA.