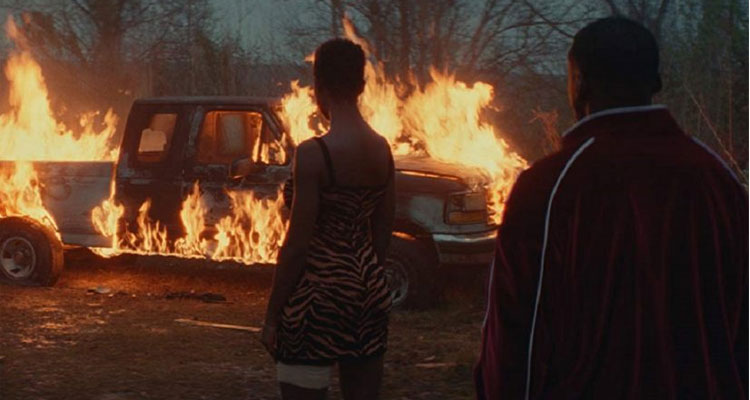 In short: Worth the journey

The Plot: Slim (Daniel Kaluuya) has arranged a Tinder date with Queen (Jodie Turner-Smith). She senses a certain sadness in his eyes. Both of them are damaged individuals but find common ground over a meal. Their date takes a wrong turn though when their car is stopped by a white police officer who acts in an aggressive manner towards them, ending in Slim shooting him in self-defence. As an attorney, Queen knows this situation all too well in modern America. However, her fight-or-flight instinct kicks in and she encourages him to go on the run with her. As they head south for a break for freedom, they’re surprised to find that people recognise them and are sympathetic. These fugitives have become social media celebrities. However, the tentative lovers can run for now but they can’t hide forever…

The Verdict: There’s a scene early on in Queen & Slim where Bonnie & Clyde are name-checked by a supporting character. The infamous bank-robbing couple, who died in a hail of bullets in 1934 and subsequently featured in Arthur Penn’s well-regarded 1967 film, are a touchstone for a 21st Century take on a slightly similar story. The carefully-considered script by Lena Waithe and James Frey is shot through with modern concerns, primarily ongoing race relations tensions and the Black Lives Matter movement. It’s another worrying dispatch from the front line of Black America’s problems with aggressive police interference into ordinary people going about their business. While a fictional story, it’s not an overtly political film though. It’s a film that is primarily about a passionate relationship developing under intense circumstances, structured in the format of a road movie rather than a chase movie.

Having worked on music videos for big stars like Beyonce, Jennifer Lopez and Rihanna, Melina Matsoukas makes her feature debut here. Moving from the concentrated world of creating content for a few minutes to a few hours is a challenging prospect for a first-time director. Not all music video directors can cut it in the film industry (what’s McG up to these days?) and they can get a bad rap for editing excessively or failing to understand the character development essential for a film to work. Not a concern for Matsoukas though. She firmly grabs hold of her script and teases out its themes of identity, love, family and freedom while also keeping the character arcs in check throughout. As Queen & Slim find themselves drawn closer to each other, they’re more at risk of being torn apart. One simple but effective scene involves them driving by the coast, taking it in turns to hang out of the car. It’s an encapsulation of the film itself, that yearning to escape and be free. This is no fairytale though – it’s tinged by darkness and the real risk of not making it.

Matsoukas works well with her lead actors, the chemistry between a post-Get Out Kaluuya and Turner-Smith is palpable from early on as they become thrown together through circumstance. They generate heat and sparks onscreen, but there’s no quiet desperation in their performances here. It’s more like a quiet resolve to get where they need to be, at great risk to their lives. It’s an entertaining journey along the way, as colourful characters with their own Southern sense of humour come into play. Not everyone wants to turn them in, a response which elicits some amusing scenes. Matsoukas is dealing with weighty themes, but in a manner that is confidently just going its own way. That’s not to say that she gets it right all the time.

The death of the police officer early on is glossed over a little too hurriedly, perhaps to keep the audience on side with our duo. There’s little sense of remorse, given the serious consequences. She also makes some footnotes by introducing brief supporting characters who have their own tragic misadventures, but doesn’t feel the need to provide a mini-resolution to them. If she’s going to insert another shooting, at least make it relevant rather than rushing past it to get back to the leads. The running time is slightly over-extended too, but it does allow the audience to luxuriate in the changing environments, the slow-burn relationship catching fire and the fine lead performances driving the film to its moving conclusion. Queen & Slim may display some first timer jitters, but it has an undeniable power to it which makes this impressive debut worth the journey.