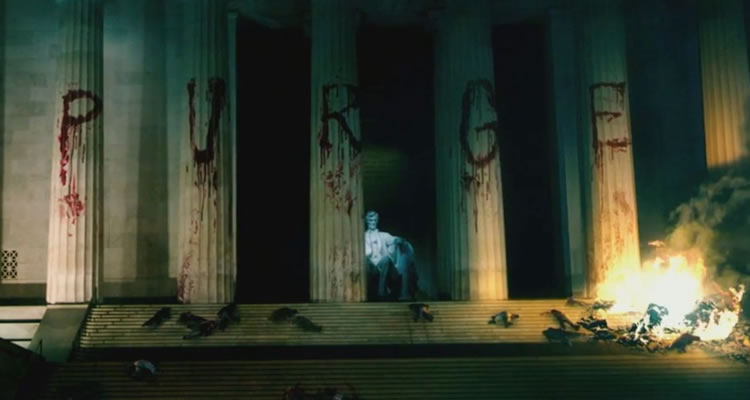 THE PURGE: ELECTION YEAR (USA | France/16/109mins)
Directed by James DeMonaco. Starring Elizabeth Mitchell, Frank Grillo, Mykelti Williamson, Joseph Julian Soria, Betty Gabriel
THE PLOT: Eighteen years after the Annual Purge was introduced in the US by the New Founding Fathers, the backlash has finally begun. Senator Charlie Roan (Elizabeth Mitchell) is running for President on the grounds of abolishing the yearly fright night, when all crime is legal for the space of just 12 hours. As the date of he Purge approaches, the ban on targeting government officials is lifted – making Senator Roan fair game – and meanwhile, Joe (Mykelti Williamson) learns that his Purge insurance premium has gone up, so he vows to protect his deli himself.
THE VERDICT: The third film in ‘The Purg’e franchise is not only the most topical, but it is a film with something to say about hate and allowing political ideas to get out of hand. As well as this, the film ties neatly in with the previous two – Roan’s family was killed on the night of the first Purge, and her bodyguard Leo Barnes (Frank Grillo) featured heavily in the second film – making this feel like a rather smart film, albeit with some dodgy dialogue and some even dodgier acting.
Elizabeth Mitchell is no stranger to playing a woman with grace under pressure who finds herself running from a terrifying threat – she starred in both ‘Lost’ and the ill-fated ‘V’ after all – and she does well with the character here, making her relatable and strong. Frank Grillo makes Leo Barnes a tenacious and rather foolhardy man, but one who you would want to have on your side on the worst night of the year. Mykelti Williamson makes Joe warm and caring with a tough side, and Betty Gabriel turns Laney into a badass, loyal character who is a lot of fun to watch. The problems with performances arise with the completely over the top bad guys, led by Raymond J. Barry as Caleb and Kyle Secor as Minister Edwidge Owens are completely over the top, and Brittany Mirabile as Kimmy, a school girl who tries to rib Joe’s store then comes back to take her revenge on Purge Night, feels as though she should be in a different movie – perhaps Spring Breakers – as her character is so ridiculous and her performance so wooden.
As writer, James DeMonaco has woven some very topical threads into ‘The Purge: Election Year’, including the idea that Kimmy and her friends are not without morals, they just have never known a world without The Purge, so while the audience thinks this behaviour is abhorrent, this is normal for her. As well as this, the idea of rage and repression boiling over in the US, in the run up to an election, feels topical and examines the wealth divide in the country, albeit subtly. That said, there is some truly woeful – and borderline racist – dialogue in the film and tons of profanity that seems to have been put in for the sake of it.
As director, James DeMonaco makes sure that the film keeps moving at a steady pace, and that the story is established just enough to get The Purge in motion. There are, as mentioned, some truly over the top performances that feel as though they belong to a different film entirely, and the crescendo of the story is almost laughable, but there is a lot of fun to be had with ‘The Purge: Election Year’, and some smart observations are made.
In all, ‘The Purge: Election Year’ has a message at its heart, and a strong enough story to sustain the running time. The performances vary in quality, but the film is well paced and, although the final crescendo verges on accidental comedy, there is a lot of fun to be had with ‘The Purge: Election Year’, which surely cannot be the end of this lucrative franchise.
RATING: 3.5/5
Review by Brogen Hayes