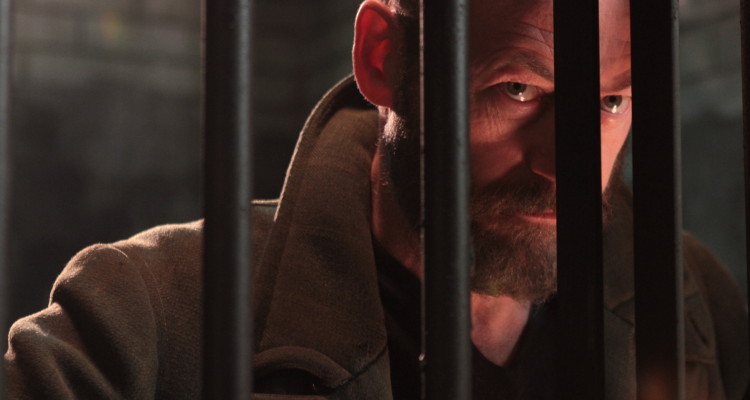 LET US PREY is released in Irish cinemas this week, and has a clever pun for a title… It’s a horror movie about possession, so both ‘prey’ and ‘pray’ work equally well for the title, with different meanings… Get it!?

Anyway, the film stars Pollyanna McIntosh and Liam Cunningham, and the movie’s punderful title got us thinking about other movies that had word play in their titles…

BEE MOVIE
Starring Jerry Sienfeld as a honey bee, dissatisfied with his career choices. Yes the film is about a bee, but the title is also a pun on those low budget commercial films that are often beloved. Of course, with DreamWorks Animation at the helm, BEE MOVIE is anything but a B-Movie, but that’s the joke, ain’t it!?

GARFIELD: A TAIL OF TWO KITTIES
There are so many puns in this relatively short title, that audience members let out a collective groan around the world when the film’s title was announced. Asking for a ticket was a traumatic experience for some.
Overall, the title is a play on the Charles Dickens story A TALE OF TWO CITIES, but the film is a story of mistaken identity. As for the substituting ‘tale’ with ‘tail’, we suspect that was just done for the pun of it all.

NUN OF THAT
This glorious B movie stars Sarah Nicklin as a woman of the cloth with a violent temper, to a violent and vengeful killer. The title is punning at it’s finest, although it doesn’t make a lot of sense in terms of the film’s storyline. That said, the film’s storyline – involving the nun receiving training in heaven from Jesus, Ghandi and Moses before returning to Earth to kick some bad guy ass – doesn’t make a lot of sense either.

COP OUT
One has to wonder, when thinking of Kevin Smith’s cop movie starring Bruce Willis and Tracy Morgan, if the title is referring to Smith’s career choices, the fact that this is simply a cop movie, or if Smith is poking fun at himself for ‘copping out’ of choosing a better title. The truth is that the studio wanted to call the film A COUPLE OF COPS, which Smith told a producer, was a ‘Cop Out’. And the rest is history.

SHAUN OF THE DEAD
Less of a direct pun than a play on the title of a George A. Romero film, the title for Edgar Wright, Simon Pegg and Nick Frost’s zombie movie could suggest, if you had never heard of DAWN OF THE DEAD, that Shaun somehow becomes King of the Zombies… A title Ed might have been more suited for. SHAUN OF THE DEEAD is still a weirdly great title for the film even if, on close inspection, it seems to be a pun for the sake of punning. It’s a great little flick, so we’ll let them away with it.

Honourable Mentions to… SISTER ACT, SISTER ACT 2: BACK IN THE HABIT, BLADES OF GLORY, SEX DRIVE and THE SANTA CLAUSE.